The Formula Foil World Championships has kicked off in Lake Garda and here are the official press releases from the first two days. Photos: Elena Giolai. 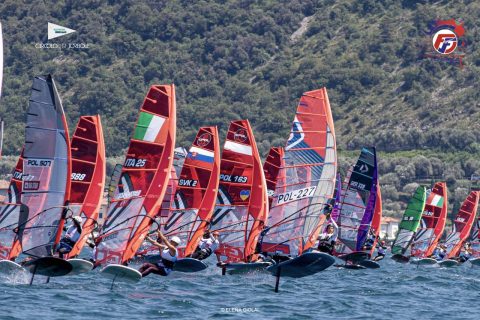 “Nago-Torbole (North Lake Garda, Italy) – Fantastic start in Torbole, on Garda Trentino, of the Formula Foil World Championships, multi-brand foil series boards according to precise rules of rating, competing at Circolo Surf Torbole until Wednesday 22 June. The strong wind that blew from late morning up to 20 knots, on one hand mitigated the heat and on the other allowed 6 races to be held, which immediately highlighted the eve’s favourites. There were two groupings with separate starts: group A with seniors and youths (under 20) and group B with the youngest juniors (under 17). After the first 6 races of the 25 scheduled, the first two positions in the men’s senior category went to France with the two very strong Goyard brothers: Nicolas, European champion of the iQFoil Olympics, fresh winner of the mythical Defi Wind, and currently first with 4 points ahead of his brother Thomas, bronze medalist in Tokyo (RS:X class). Third position for the Swiss Elia Colombo, while the first Italian and first in the youth category is the Circolo Surf Torbole athlete Manolo Modena, sixth overall and tailed by teammate Jacopo Gavioli. Third under 20 is the Slovakian Kubin. Italy is also in pole position among the women with home athlete Sofia Renna, ahead of Linda Oprandi. 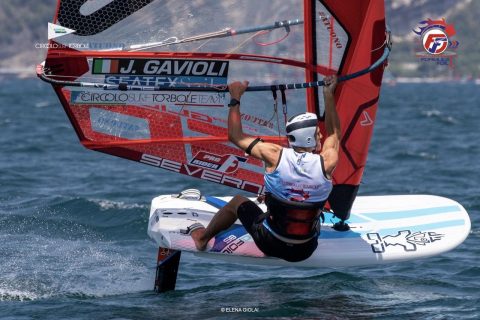 Also racing in the regatta were the very young juniors, under 17, but many of them are just 14 years old and already showing a certain confidence and ability on the foil boards. Seemingly unopposed was the strong Circolo Surf Torbole athlete Leonardo Tomasini, who racked up a complete series of first partials, catching up with many competitors in group A who had started first. The other two Circolo Surf Torbole athletes Mattia Saoncella and Valentino Blewett also achieved six seconds and six thirds each, confirming their respective positions. 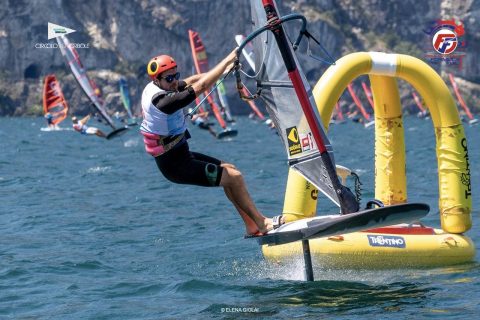 Among the girls Anna Polettini and Medea Falconi, at their first foil racing experiences, are close in the overall ranking.

Sunday’s start is scheduled for 1pm with the interesting battle between the seniors, including Dutchman Luuc Van Opzeeland (bronze medallist at the iQFoil European Championship), who has all the potential to challenge the Goyard brothers. The event, organised in collaboration with the International Windsurfing Association and the Italian Sailing Federation, as well as the Garda Trentino Vela Consortium for the management of the virtual gps-anchored electric buoys, counts the participation of 13 nations, including Mexico and Singapore.”

“Nago-Torbole (Lake Garda, Italy) – Another fantastic day in Torbole, upper Lake Garda, Trentino shore, for the Formula Foil World Championship organised by the Circolo Surf Torbole, IWA (International Windsurfing Association) and the Italian Sailing Federation, which as always allows high-level regattas to be held with Race Officials and an international jury. Strong winds and sunshine again kept the athletes busy in the two sessions of three races each with a break of about an hour between one and the other, bringing the total number of races out of the 25 scheduled to 12. 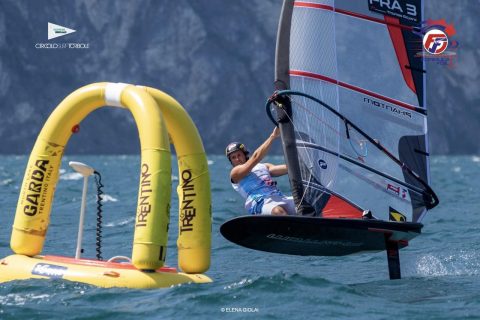 The day was particularly exciting and spectacular, due to some starts given with a mandatory left tack, which saw the fleet race towards the Ponale rocks. Even the rounding of the buoys was more tightly contested with close engagements, which were somewhat lacking on the first day. After two days and 12 races, the leaders remain unchanged in the various categories, suggesting no big news for the days to come: among the seniors there is a family battle between the two French brothers Nicolas (European Champion of the new iQFoil Olympic class) and Thomas, silver medallist in Tokyo in the previous RS:X Olympic class: the former is leading with 7 points ahead of Thomas and 8 partial victories, compared to his brother’s 3. The Dutchman Luuc Van Opzeeland has nibbled a few points off the Swiss Elia Colombo and moved into third place. Always in the top ten overall seniors the athletes of Circolo Surf Torbole who are competing in the Youth category: Manolo Modena maintains the lead in the under 20 classification with an excellent sixth overall (two fourths in regattas 7 and 8), followed by team mate Jacopo Gavioli, second youth; always third in his category the Slovakian Kubin. Also competing were the masters and grand masters with Spain’s Del Cerro and Poland’s Dittrich first and second respectively.

Sofia Renna is also leading the women’s category, chased by the other Italian Linda Oprandi; third the Czech Slatvova. 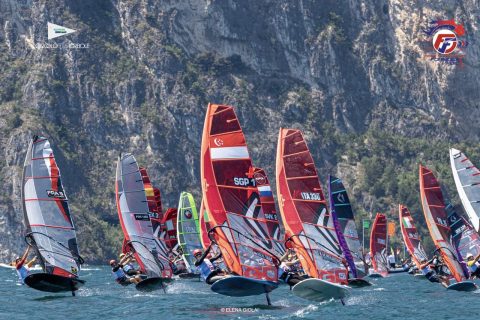 But the surprise is to see the juniors racing: among them, also 12 year old boys and girls, who in just a few outings have learnt to fly with the foil board and in these first two days have tackled the strong wind of Garda Trentino with surprising ease. Circolo Surf Torbole’s holder Leonardo Tomasini, fifteen years old but with an 18 years old tonnage, is dominating and remains focused on improving his speed and trim from test to test: so far all first partials for him, which allows him to be in the lead with 9 points ahead of his team mates Saoncella and Blewett. Among the girls first Anna Polettini.” 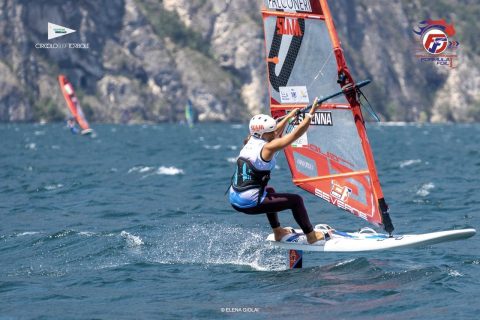