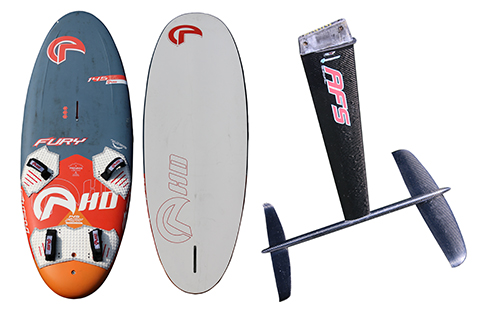 THEY SAY
The AFS W85 Carbon Foil with DTT (Deep Tuttle) head is a very accessible, versatile and upgradable foil, perfect for freeride/progressive foiling. Developed with perfect balance fore/aft to suit all makes of boards and is an ‘Apex Product’ with no compromise made by not using aluminium or other materials that can detract from performance or durability.
The Fury Freeride 145 board is developed from our Freerace series with refined features and construction optimised for use with foils and a deep tuttle fin box.

WE SAY
With the skirt around the leading edge of its Deep Tuttle head, the W85 is easy to locate, with only small tweaks required to house it securely in the box. Tested in the AHD Fury 145 and tried in several other boards, we have to say the W85 is a significant step forward from its already impressive predecessor. It is just so balanced and predictable in flight, responding smoothly to any applied change in height, providing the confidence to really drive power into it and explore its straight-line potential. In marginal winds, the lift is measured if not extensive, easily capable of being used in sub-10 knot winds and sails in excess of 7.8m; you just need to put the effort in to punch clear of the water more than on some of the lower aspect foils in the group. Once going, the W85 simply doesn’t want to stop, its rapid acceleration helping to amplify the apparent wind and provide the feedback in the sail to keep going. It is a fast foil, but more than this, speed comes easily such is its secure, dependable nature. It flatters the inexperienced foiler, and inspires the more accomplished to push harder. There is little hint of play or nervousness in the foil, it’s equally happy cruising on a reach as being loaded and tilted to point high upwind or driven deep off the wind. In transitions the W85’s predictability again comes to the fore, providing the speed and response to really hone a dynamic turning style. It may be a little less forgiving than some of the slower foils, as it enters with speed and purpose, but it is endless fun learning to master a more expressive gybe. The W85 we tried was one of the first off the production line and as such has the mast bonded and pinned into the fuselage, making it a single ‘T’ piece. AFS have spent many months perfecting a new junction design (without compromising performance) and so current foils (post test model) will be ‘dis-mountable’ – great news for transport and storage. With the additional bonus that all AFS foils will now be supplied with bags as standard, this full monolithic carbon masterpiece is a snip at just £1079.00, over £600.00 cheaper than its impressive AFS-2 forerunner! The W85 is easy on the eye and the purse strings – quality foiling has never been so accessible!
The AHD Fury 145, first and foremost, is a very user-friendly and forgiving freeride board. Supplied with a 45cm glass fibre fin, it requires little input from the rider to release onto the plane and accelerates smoothly to a comfortable cruising speed. Secure and relaxing rather than loose or flighty, it cushions the ride over turbulent seas and allows the pilot to easily pick their path, responding fluidly to foot steering. In the carve it grips beautifully and carries its speed effortlessly through the turn for a planing exit, demanding little of the rider. Produced in a durable PVC Carbon layup, reinforced for foiling, and supplied here in the UK with quality MFC footstraps, it retails at an attention grabbing £1299.00, making the £2369.00 W85-Fury package exceptional value for money.