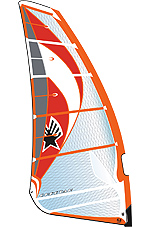 OVERVIEW
The Cheetah has had a makeover for 2016, using a lighter scrim said to make it lighter and also increase its softness. The 6.0m, 6.5m and 7.0m have also had their batten count reduced to six, making the sail lighter still to improve manoeuvrability. The profile has been reduced above the boom, in order to enhance control in strong winds, whilst the twist in the head of the Cheetah has been refined by improved progression in batten spacing, bringing them closer together in the head of the sail. The result, claims Ezzy, is a faster foil with more constant power and control. Using the brand’s exhaustive supply of rigging aids, including their unique calibrated downhaul system, tuning the Cheetah correctly is nigh on fool proof. Tested on an Ezzy RDM mast (although also compatible with an SDM) the Cheetah sets with the now familiar deep forward profile, the new scrim certainly up to the brand’s usual high standards, looking capable of withstanding years of service.

PERFORMANCE
On the water the new Cheetah has the signature Ezzy feel of constant dependable power delivered to both hands, coupled with a mammoth wind range that imparts the confidence you can make the most of any eventuality the conditions may throw at you. On its minimum downhaul setting it generates a wealth of power, which can be used to good effect to push wide stubborn boards onto the plane in the most marginal winds. Providing constant feedback, it also has a very soft nature to its delivery, making it both very manageable and useful for pumping. As the wind increases, the Cheetah can be made more efficient by pulling on the downhaul to its maximum setting noted by the brand’s calibrated system, opening up the leech more. Once tried, as a team we tended to keep the downhaul on this one setting whatever the wind strength, adjusting the extent of the power purely on the outhaul. We’re all between 70-80kg and found the Cheetah’s still, deep profile delivered plenty of bottom end power on this setting, making tuning even more straightforward. As such it had a fantastic top end performance, feeling slippery through the air and accelerating in the hands during every gust. Using a modern boom with narrow arms, we did find you need to outhaul the Cheetah more than anticipated to account for the depth of its planing draft, but taking it into challenging conditions, this elasticity creates a softness that is a real advantage. The soft power delivery is also a real plus during transition, reducing the chance of the rider being pulled to their toes as they pull the power back on in the exit. Partnered with a fast freerace hull, the sail keeps pulling and never loses its stability or form, instilling the courage to keep pushing and the minerals to back it up.

THE VERDICT
The new Cheetah provides constant dependable power with such a soft useable nature to make it more user-friendly than ever. From a real powerhouse to a top-end blasting weapon, it has a massive tuning range and the usual Ezzy attention to detail.