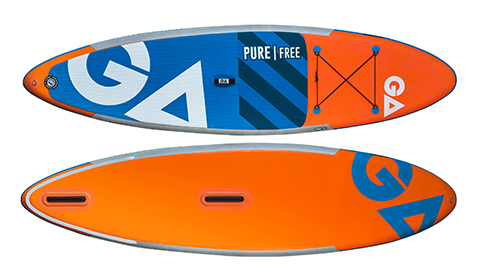 THEY SAY
Our stand up paddling and windsurfing hybrid, the Pure Free Windsurf, is perfectly suited for relaxed SUP sessions, but also windsurfing in lighter winds and when just taking your first steps with a sail in your hands.

WE SAY
GA have revised their iSUP range for 2019, with two clear choices between the detailed Pure range and the more price-pointed IQ series, including a Wave, Free and Touring series. The Pure Free WS lineup consists of three boards, this 10’7” being the middle option, and each capable of being used for windsurfing as well as SUP’ing. The two larger sizes are 6” in thickness, which, combined with the brand’s Fusion technology and new stringer construction on the rails, is said to provide impressive stiffness, even at low pressures. It comes supplied with two plastic fins, fitting into the 10” US boxes and fixed into place using hand-tightened screws. The central fin is placed well behind the mast foot position to provide more directional stability, whereas the tail of the Free WS tapers considerably to its rounded tail, making it narrower than all the other inflatable boards here. There is also some PVC piping fixed to the tail, providing a hard release edge for quick water release – a feature we’ll refer back to later. Complete with a towing eyelet and storage net on the nose, the GA looks much brighter and eye-catching in its new graphics, retaining the single carry handle in the middle of the board and a linear grooved deck pad, covering the majority of the deck.

Being 6” thick, the GA is certainly buoyant and corky in nature, providing plenty of glide and ease when paddled. Stand forward in the paddling position and it tracks very well directionally, the board sitting high on the water’s surface and requiring little input from the rider to squeeze forward. Its stiffness (even at lower than the recommended 15 psi pressure) is excellent, and combined with the PVC edging, undoubtedly plays a part in its efficiency. On long voyages the grooved EVA provides plenty of traction, its linear pattern liked by many, as it seemed to mitigate the chance of pins and needles in the feet, which was experienced when using others. Step back during manoeuvres and the tail of the GA is certainly narrower, feeling less stable than others here, yet making it more responsive and pivotal as a result. Ideal for all-round use in varied sea states, it will suit most rider weights, its material quality and construction capable of handling years of service. Plugging a knuckle joint UJ into the GA, it was equally comfortable and efficient in windsurfing mode. The issue experienced on 6” thick boards in the past was that they were easily influenced by a strengthening wind, inducing sideways slip. Yet, whilst the GA is 6” thick, the rearward central fin and the PVC rail in the tail are ready to counteract, so rather than slipping sideways, the power of the sail translates to forward motion instead. With enough power delivered, the Free WS will plane willingly, allowing the rider to play with their stance and position to keep the board released. The narrower tail is also useful when manoeuvring as a windsurfer, stepping back and sinking easily for a more dynamic redirect. Ideal for teaching younger family members and possessing a wider wind range than many, the GA is a great all-round design, with an outline and design features that set it apart.