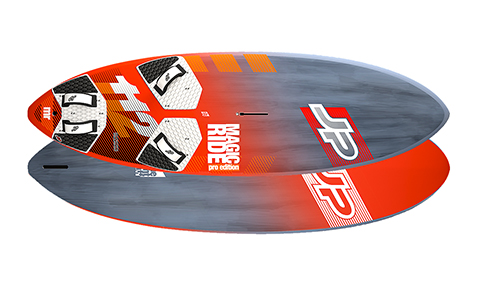 THE LOWDOWN
JP’s Magic Ride range grows year upon year, and now encompasses seven sizes and no less than four technology options. The 112 is new for 2018, replacing the 111 and adopting a similar concept to its siblings, with a very rounded outline and particularly pulled in tail. It is tested here in their top-end Pro construction and certainly looks the part in its classy silver paint job. The roundness of the outline is accentuated by the board’s pin-nose, whilst the tapered rails enact the same visual draw, focussing attention on the board’s thin profile. With a steady kick to its nose at the end, it is otherwise a very clean and uncomplicated design, similarly mirrored on its underside, displaying a mix of flat-vee and double concave that would struggle to raise any eyebrows. The 112 Pro comes complete with a Maui Ultra Fins derived G10 fin, thick dual density deckpads (home to numerous inboard-outboard footstrap options) and comfortable Velcro footstraps with built in anti-twist system.

BRAND CLAIM
“The new 112 follows the shape amendments of its brothers. Now all 7 models provide a high water position, giving them a lively ride and improved performance. The 112, like the 119 and 130, is a lively, agile, sporty freerider which simply planes better, rides more comfortably and gybes much easier than comparable, traditional freeride boards.”

PERFORMANCE
On the water the Magic Ride 112 was the surprise package of the group. It feels relatively small yet gets going early, and corners smoothly and easily thanks to its rounded outline, narrow tail, rockered profile, thin tapered rails and vee bottom shape. But the biggest surprise was its speed and performance off the wind when properly powered. Load it with enough power and it sits high on the water’s surface, cutting a clean path through choppy seas and feeling quick and alert in response. It doesn’t charge through troubled water as if on a mission, but dances over the crests and as such relies on good technique from the rider to keep the board teetering on its fin. That said, if you come from a more nervous disposition, you can throttle back, adopt a more upright stance and the 112 settles easily. In marginal winds the JP’s performance is comfortable if not exceptional. It feels smaller than most in the group, largely due to its pinched tail and suffers slightly in lulls as a result, particularly when trying to drive upwind. The upside to the narrowed tail can be clearly felt when banking the board into a gybe. The Magic Ride is a master of the turn and feels so effortless and refined, even in the most challenging sea states. It provides real connection and feel throughout the turn, enabling the rider to use the feedback and alter the angle as they see fit. Use the Magic Ride in a typical coastal break and it wouldn’t feel out of place, shifting from rail to rail easily, and responding much the way you’d expect of a large crossover board.

THE VERDICT
Early planing, easy, forgiving and responsive underfoot, when you light the Magic Ride up with more power you begin to reveal its hidden talents. Another significant improvement in the JP ranks for 2018…they’re having a good year!