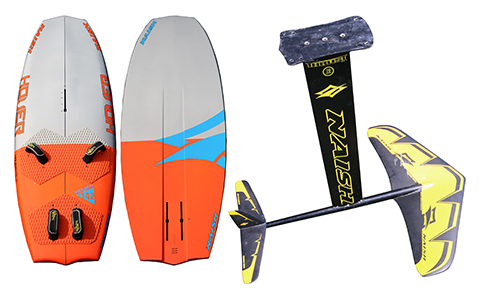 THEY SAY
An all-round freeride foil, the Thrust WS 1 was developed with Robby Naish to be the ultimate easy access fun foil system. Thanks to its modified delta planform, it launches early, provides excellent flight stability, yet never becomes unmanageable at speed.
Designed specifically for windsurf foiling, the Hover 142 board is the larger brother of the 122 and is aimed at the heavier foiler. It features a flat rocker, which planes easily in light winds.

WE SAY
With its narrow span and long chord, the Thrust WS1 front wing is as low aspect as they come and generates plenty of low-end lift to get you going easily. Shift your weight back, placing your feet in the straps to work the foil and it responds instantly, providing flight even at very low speeds. Using the Thrust on its base plate, the position of the lift can be fine-tuned beautifully, with millimetres making a big difference – bring it back for more obvious lift and further forward for lighter riders or for more control in stronger winds. The integrated screw-adjustment in the tail wing was also very useful, varying the angle of the stabiliser and enabling the pitch of the board to be changed in an instant, according to rider weight or preference. With the setup finely tuned, the overriding sensation whilst using the Thrust WS1 is of ease and enjoyment. The quoted length for the fuselage is short at 64cm, but this tells only half the story as the front wing is mounted out in front of the fuselage, making the true length of the foil more like 82cm. Combine this with the rudder fin that sits above the tail wing and the Naish is very directionally stable, helping to channel the forces and flow of water uniformly over the wings. The inset footstrap positions of the Hover board were a good compliment for the Thrust as it encourages a more upright stance over the foil. Comfortable for long periods of use, whilst its straight-line speed isn’t an embarrassment by any means, it is definitely more freeride and manoeuvre-oriented than blasting/race focussed. Loose and playful, it responds to changes in foot pressure in an instant, feeling lively yet predictable at all times. This becomes more evident than ever in transition, the Thrust’s slow flight speed and stability making it a fantastic tutor for full flight gybes. It can adopt the tightest arc, its ability to sustain flight and speed at the steepest angle providing time and margin for error during the foot change. Overall, the Thrust is easy to setup for varying conditions and rider weights, providing the chance for instant success and really celebrating the values of windfoiling.
With its inset straps and base plate setup, the Hover 142 was the perfect partner for the Thrust WS1. The channel through the centre of the board’s tail keeps the foil’s angle of attack consistent, whilst the board’s rockerline has been kept as flat as possible to promote early planing. Despite its 142L, the larger Hover (dressed in 2019 graphics here) wasn’t really comfortable being used with sails much larger than 7.5m, the inset straps and upright stance meaning you couldn’t get far enough away from larger rigs. Instead, bag out the sail and rely on the early lift of the foil to make the most of marginal conditions.