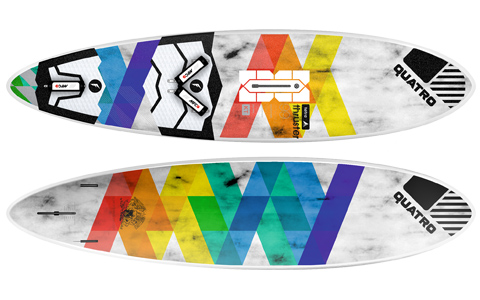 THE LOW-DOWN
Having tested the 99L Tetra back in 2015 and got on famously with it, we were interested to see how this, the largest in the unchanged range, compared. Unlike the 99, the 109 comes supplied with a single-fin rather than thruster set-up, although still possessing the boxes for a tri-fin arrangement if desired. Supplied with Quatro’s reputed deckpads and MFC straps, it does have the option for outboard/double back strap positions, although even these remain relatively inboard. Wide in the shoulders yet narrow and thin in the tail, the Tetra sees the rider’s stance move back on the board, said to increase response and early planing potential.

BRAND CLAIM
“This short compact rocket of a quad was designed for speed and manoeuvrability. We have completely redesigned this board from its outline to its bottom contour to the entirety of its profile flow. A fuller outline through the nose compensates for its shorter length.”

PERFORMANCE
Feeling big underfoot, the Tetra 109 has masses of stability and rig carrying capacity as a result, planing early and accelerating smoothly as the power is applied. As with the 99, we found the thin tail of the Tetra really hugs and connects with the water, giving it an easy forgiving character and tempered ride. It is a stunning board for cruising on over great distances in a relaxed upright stance, and would find particular favour with larger riders. Unlike the 99 though, we didn’t find it particularly gunny or suited for directional blasting, the flat deck under the inboard straps making it uncomfortable to adopt a locked in stance for any sustained period. The lighter riders on the team in particular found the board’s longer length and wide voluminous shoulders tended to bounce a bit when using the board in harsh seas states and strong winds. Change the fin to a thruster set-up before introducing it to a wave break and we began to understand the Tetra’s real forte. It would make a fantastic float and ride platform, especially for the heavier rider, where its early planing and easy progressive nature would enable the rider to make the most of the conditions. On the wave the flat deck and thin tail provides smooth and easy rail to rail response. It does still feel its size, yet the thin rails on the tail grip beautifully and help to redirect the board up the face, the broad shoulders effortlessly pushing back off the section or broken white-water to complete the turn. It was a lot of fun in marginal winds, made even more so when you’re picking your way through the floundering crowds on their smaller wave boards.

THE VERDICT
A real bear of a board, with the early planing prowess and weight carrying capacity to make fun, easy work of the most fickle float and ride conditions, the Tetra 109 would equally be suited for larger riders that are looking for more all-round ability than a large dedicated wave board offers.