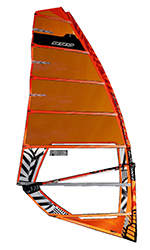 OVERVIEW
Now in its sixth cycle, the Fire remains in RRD’s sail line up as their no cam freerace performer. The only sail in this test group that is recommended for use on a 460cm mast (SDM specified), it is also the largest, increment wise. The big change for 2018 is in the sail’s aspect ratio, reducing the area in the head for less swing weight and smoother twist, whilst extending the concave cut of the leech to improve top end control. Rigged on a Dynamic Pro 100% mast, it has a moderate luff curve, the bottom four battens enjoying rotation around the mast during transitions. There’s a good deal of looseness along the length of the leech, the shape of the sail’s profile sitting low yet relatively far back in the draft. With its low cut foot and exclusive use of tubular battens, the Fire is aimed squarely at providing performance, for those that want more without taking the leap into the cammed sector. And as with several other sails in the test, it possesses two stepped clew eyelets (named by RRD as their Power Clew system), said to offer distinctly different results – the higher, further out eyelet for power and drive, or the lower inner eyelet for control and ease. Visually very conspicuous on the water with its orange upper panels, it would be interesting to see how its size translated to feel on the water.

BRAND CLAIM
“The Fire offers all the performance of a race sail, but without the hassles of cambers. … Modifications to the outline and aspect ratio helped increase the power, for improved drive at the low end, whilst the increased negative leech curve helps to keep the power low in the sail where it can be easily controlled.”

PERFORMANCE
With the Fire possessing the largest increments of all the sails in this group, it comes as little surprise that it feels its size in the hands initially. Grunty and powerful in the hands, it generates plenty of bottom end power when set for marginal conditions, the stretch in the hybrid luff panel and sleeve helping the profile to deepen significantly as the wind fills. There is also plenty of response provided whilst pumping, the pull coming through both hands, maximising the drive and more direct return of the longer, stiffer mast. Accelerating smoothly, it can be used to cover distance in comfort, happily partnering large stubborn freeride hulls and adopting a more upright, cruising posture. And yet that tells only half the story. As the wind increases, it’s time to return to shore and adjust the Fire with more downhaul tension. It is only then that you begin to appreciate its true virtues. With the leech twisting off, the centre of effort is balanced and centred around the rider, feeling much more precise and direct in nature. Connect it to an efficient freerace or slalom hull and it can’t help but impress, its low cut foot making it natural to assume a locked in stance, providing the impetus to charge around on any point of sail. The two clew eyelets also make a noticeable difference, giving the rider an extra permutation for fine-tuning the power delivery to match their style and the conditions. In transition we were expecting the RRD to feel cumbersome, given its size, yet it performs admirably, powering in easily and rotating smoothly without feeling too top heavy or clumsy. And once on the new tack, the low, rider focussed power is easy to direct, the twist profile in the upper panels helping to keep the sail driving forwards.

THE VERDICT
Capable of transforming its character significantly through tuning, the Fire has masses of user appeal, from the progressing freerider on their entry level short-board, right up to the weekend racer looking to power his slalom machine.