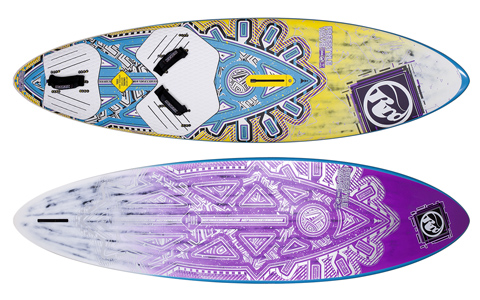 THE LOW-DOWN
The V3 series of the Freestyle Wave remains current for 2016, offering four sizes of board in two different constructions, this 106 being the largest of the range and tested here in its high-end Ltd construction, complete with eye-catching polished hull. Whilst most other brands are, at the very least, offering the option to convert to a multi-fin set-up, RRD have kept the FSW as a single fin, believing it is better suited for those “who wish for a ‘do it all’ type of short board”. Along with the fin configuration, the RRD has quite a conventional rounded outline, with a thin tail, pinched rockered nose and simple clean bottom shape, bestowing it with a somewhat classic appearance.

BRAND CLAIM
“The outlines of the boards have been re-designed and adapted to the new rocker line. The boards are now slightly longer than the previous incarnations, the V2s, and slightly narrower. This difference in width has created a more alive, crisp feeling of the performance while riding and further more enhanced the control in stronger winds.”

PERFORMANCE
Rising up onto the plane early, the RRD has a very smooth, controllable and endearing nature, gaining speed well and feeling lively, yet forgiving of clumsy footwork. Supplied with the largest fin of any in the group, it is directionally very stable, the fin providing masses of traction to push against. It has a very interesting character, the nose sitting high to give the impression of a manoeuvre-oriented platform, confirmed further still by its effortless rail-to-rail response as you transfer weight from heel to toe. This fluid gliding ease belies the fact that the 106 is actually one of the fastest in the group as well, the dependable grip of the fin providing the confidence to plough power into the board and push it hard. It covers great distances in real comfort, the large deckpads and familiar Da Kine straps playing their part. In harsh seas, the pronounced vee in the hull seems to iron out any impact well, the balance of the board enabling the rider to stand upright over the board in a more relaxed stance if required. But it was in the gybe that we really fell in love with the FSW. It carries speed into the turn effortlessly and can adopt any angle required, responding instantly to any change in pressure yet exiting with speed as if on rails. In a wave break the RRD’s early planing, smooth gliding nature over chop and ability to simply motor upwind make it a great deal of fun to use. Partnered with a smaller fin, it was also surprisingly useful on the wave face. Whilst not as agile or loose as some of the multi-fin boards, its real strength is the control and speed it carries into the turn … and speed can always be used to good effect.