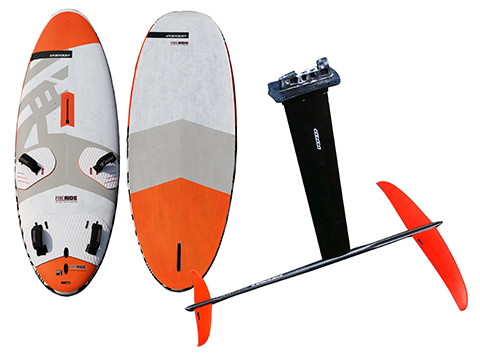 THEY SAY
The WH Flight ALU 85 together with the FireRide 155 is a simple and cheap solution for freeride foil use that allows you to save space and costs. The FireRide 155 is a windsurf freeride board but also well suited for foiling. The WH FLIGHT ALU 85 is the newest and latest developed freeride hydrofoil. It has the highest performance in light wind conditions and allows you to be in the water in 7-8 knots.

WE SAY
Supplied in a sleek padded bag with a manual and tools, the WH Flight ALU was easy to put together, and comes with the hitherto unique option of being able to be used with a Powerbox fin box. In fact, the plate system enables the foil to be used with any type of box, and has the stated added bonus of “eliminating the risk of the box cracking” … time will tell. Easily located into a Tuttle box, the WH Flight provides a good amount of early lift and response from pumping, albeit requiring a slightly different approach from other foils here. The wings of the RRD are the highest aspect on test, mounted on the longest fuselage at 120cm. The front wing is located a long way in front of the mast, so despite it generating a smaller force, it is located a longer distance away, amplifying the power and pushing the board clear of the water early. So instead of staying close to the wind in marginal conditions (as you do on lower aspect foils), the RRD favours a positive turn off the wind and a few pumps to get faster flow of water over the wings, the longer fuselage providing the springboard to rock back and punch through the back foot. Once clear, the WH Flight accelerates with interest, feeling fast and efficient in marginal to comfortably powered winds. Its response to input from the rider is smooth and progressive, as well as relatively fast given its fuselage length, making it fun and easy for cruising across the wind. The long fuselage also has a positive impact during the gybe, providing flight stability and time during the trickiest part of the transition. However, as the wind increases and you begin to really load the WH Flight to explore its performance range, it does start to protest, which we think can again be attributed to the long strut. By extending so far behind the mast, it is prone to flexing and oscillating as you push through your back foot or sail through turbulent water, providing a clear twitch and manifesting in some control issues. It’s a shame as the wings feel they could go faster and be pushed more were it not for the foil’s unpredictability forcing you to throttle back. Fortunately, RRD have an answer as they offer the option of shorter fuselages, designed specifically to extend the upper range of the foil’s wind limit. Having tried the WH Flight in a number of different boards and conditions, we feel it best placed for use in marginal winds, calm seas and wide boards with the 120cm strut in place. It is clearly in its element for making the most of days when you would otherwise be stuck on the beach.
Despite its volume of 155L, the largest FireRide of the V1 series is narrow at just 76cm. As such it feels smaller underfoot than its quoted size, being chunky in profile and very domed along its rails. Certain features such as the array of footstrap positions available and long mast track certainly help in tuning the setup for foiling, whilst its extended length provides room for recovery should you accidentally sky the foil and plummet back to the water’s surface. It will provide a trusty, dependable platform for the foiling novice, safe in the knowledge that the box in the board can handle the forces. However, if you’re likely to push your foiling frequency beyond the occasional foray, we do feel the conventional design of the FireRide has been superseded. With its narrow, highly domed tail, the FireRide struggles to provide consistent connection to the foil through the back foot, which becomes particularly apparent through choppy seas. Instead, the FireRide is best used with a fin in a conventional manner, its classic user-friendly nature requiring little input from the rider in return for hours of fun, effortless cruising.