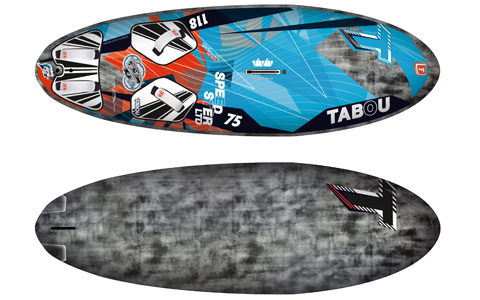 THE LOW-DOWN
The Speedster series is unaltered for 2016 in every way bar a slight graphic update and the inclusion of a new T-Lab Lightwind fin. Even more eye-catching than the new livery however are the reduced prices, with the CED version pitching in at £100.00 less this year and the LTD £50.00 less. Good news when most other brands see a price increase. Sitting between the Manta and the Rocket in the Tabou range, the Speedster is charged with providing ‘World Cup Speed in an easy freeride board.’ Short and wide with an attractive rounded outline, its scooped-out nose visually harbours more rocker than others on test here. In the tail there are deep cutouts projecting along much of the finbox’s length, whilst on the deck are the Speedster’s now familiar enlarged deckpads with raised sections under the toes of both the front and backfoot.

BRAND CLAIM
“Ultra-fast and easy to handle, the Speedster is the perfect board for the recreational sailor who wants to have the highest GPS speed at his local spot without having all the hassle of a slalom or speed board. The Speedster rides smoothly and gybes easily. All boards come with T-Lab fins to provide a winning freeride combination.”

PERFORMANCE
There is good reason why the Speedster remains unchanged for the new season. It follows the old adage: “If it ain’t broke, don’t fix it!” With width and stability to hand, the 75 can carry a much larger sail than its quoted volume would have you believe, albeit at 233cm it is the shortest here so has less directional stability for pumping effectively in marginal winds. Once going though, its acceleration is instantaneous, exploding from the blocks to sit high on top of the water. There is plenty of feel and feedback from the fin, the board feeling fantastically alive and responsive underfoot. It simply craves power like an addict and is best partnered with an efficient freerace/slalom sail that has the best chance of keeping up with it. It was certainly more critical of its sail partner than others; such is the Speedster’s credentials that it could leave a freeride sail wanting. On flat water it feels invincible – gliding effortlessly through lulls, pointing at superb angles and reaching seemingly limitless speeds whatever the point of sail. We did think the straps felt quite inboard (particularly the front straps) when trying to load and push to explore its top end, yet this soon became a real bonus when entering a typical choppy coastal arena. Light and compact underfoot, it skips over small chop yet becomes more technical as conditions become severe, requiring real rider input to keep its energy at bay. And yet, when it all gets too much, the inboard straps come to the rescue, allowing you to stand upright over the board and regain composure; something you can rarely do on a slalom board. Which leads us to the gybe – another Speedster delicacy. With its short boxy stance and rockered nose, it seems to fit beautifully into tight corners, its rails biting crisply whilst its entry speed means you’re through the turn before you know it. Tacking, on the other hand, with its short low volume nose is quite a skill, punishing any clumsy elephant steps, so stick to gybing in our opinion and you won’t be disappointed!

THE VERDICT
Blisteringly fast and a stunning gybing machine, the Speedster lets you ride the fin and really explore your adrenaline limits, with the built in safety-net to back off if it all gets too much.