From our August issue we look back at this feature with Moroccan sensation Boujmaa Guilloul and his new new sponsor – Goya! Windsurf caught up with him to hear more about the move, his new-found passion for foiling and how he ended up ‘stuck’ on Maui for 6 months! 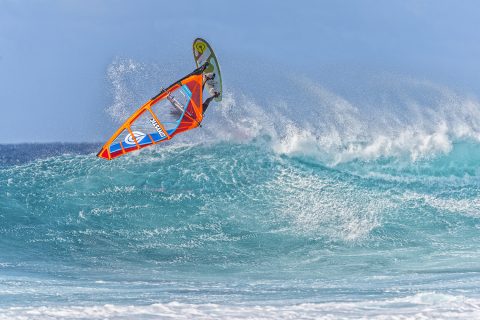 Moving to Goya was a big change, but it has given me the opportunity to be part of a fast moving company where I can be at the heart of the sport and working with some of the most inspiring and talented windsurf board and sail makers; I am surrounded by an amazing team. I have been given the opportunity to try so many different new things and to be able to learn from the best; that is a driving force to my windsurfing life. Knowledge and learning is the most precious thing to me.

I always considered windsurfing a passion and never a source of income, but I was very lucky to have been supported to travel and discover some of the most amazing windsurfing spots in the world.

Overall the Goya gear is amazing! I tried so many boards, sails and much more; everything felt great, but I managed to have my favourites! I was going to shape a custom board but ended up saving it for later. I always feel like I don’t need that many boards or sails to be enjoying the ocean, and I do feel guilty by consuming too many toys. I am not into having the most boards and gear, but mainly having one thing that I enjoy and use it until it dies. The production boards work just fine for me. I am a fan of 3 fin boards and so far the Goya Custom 3 Pro 75 is my favourite, I feel like I can use it everywhere. With an MFC TF2 centre 16 cm and 10 cm TF sides it feels great – fast, planes early and has an incredible straight-line speed. I have a super wide stance for how short I am and with that I get so much control and manoeuvrability for what I am doing with it in the waves at Ho’okipa or even at side-onshore spots. I also tried the 81, it does feel big for me to use at Ho’okipa, but I am sure it will be my favourite board elsewhere. 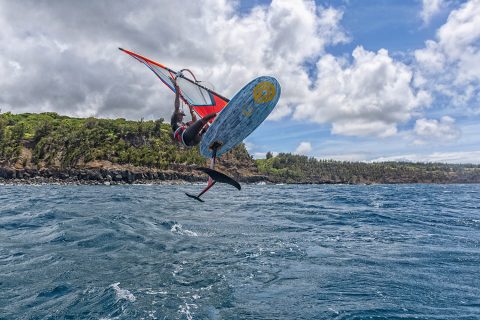 I have also been foiling a lot, testing many different MFC foils and Goya foil boards. The setup I am using these days is insane, it has brought a whole new feeling to my windsurfing and my passion about it. I have been foiling for a year now and from the very first time I felt the board flying above the water and hearing just the sound of the ocean and wind in the middle of the sea, it was an amazing feeling, very deep, almost spiritual. I immediately felt the connection with it and it wasn’t too hard, I just took the time to spend many hours foiling at first in very light winds and with big sails, but then realized it’s just the same when the wind is at 10 to 15 knots, to use a 4.5 or a 5.5. If you don’t want to break the world speed record, it is actually more fun to have a light sail because then you just play with the foil and you worry less about the sail and its weight.

I would have never imagined I could be doing what I am doing now with a windsurf board, going places I would never go to with regular boards, and it has opened my eyes towards a new challenge to feel the thrill I always craved for when I am windsurfing. I do a lot of long distance sailing because it feels so incredible to be in the middle of the ocean far away from all the tensions on land. These quarantine times have been very strange and being somewhat remote in the ocean made me dream again and think about more positive things and continue the pursuit of happiness that windsurfing has given me. I want to go on long distance journeys, collecting knowledge about the ocean, about how to survive alone in the ocean and also to challenge my body. Hopefully I manage to do some crossings soon. I also want to show the younger generations in Morocco and around the world that the power of will can move mountains, and that with only natural energy we can reach places and have experiences we have never dreamed of before, all with a very small carbon footprint. Wind and sun energy should be developed more and used more, and I wish to be alive to see renewable energies revolutionize the world. 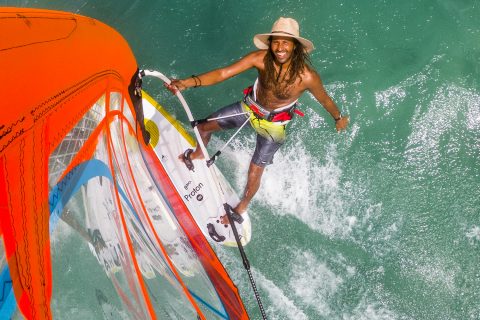 If you are just starting to foil, my advice is try it first in light winds around 10 to 15 knots with a medium wave sail. You don’t need to straight away be in the footstraps, you can just play with your stance till you find the right position. You don’t have to waterstart, you can always uphaul, that way you won’t be kicking the foil that much.. and take apart your foil always after every session no matter how lazy you are to prevent the parts seizing up!

I have been on Maui for the last 6 months, I actually came here to train and to follow the IWT tour, but with the Covid-19 crisis I didn’t know what was going on and if the situation was just going to be for a couple of weeks and then things would go back to normal. I had plans to go to Japan and Oregon had things been different, but I feel so lucky to end up ‘stuck’ on Maui. I was able to windsurf and surf almost every day. There were anxious moments, but I managed to wash it off with a couple of waves and I am so blessed to have had that; I am very fortunate to have been here and to have been surrounded by a supportive community. Back home in Morocco it has been very strict and my friends couldn’t be in the water like I have been. The government implemented some strict measures to limit the spread of the virus and it did work pretty well. I hope I can get back home soon, as the borders are still closed for everyone, even citizens!