DÉFI SUPERSTARS: RETURN OF THE DÉFI

With the 2022 Défi Wind in full force today we take a look back on last year’s Défi Superstars to get you in the mood for the world’s most spectacular windsurfing competition!

After a 2 year break due to Covid, the legendary Défi Wind returned to the windy waters of Gruissan in the south of France with a revised format of a smaller fleet and course, but with the addition of a lot of the top PWA racers, as it was the first time a Défi was sanctioned by the PWA. Francky Roguet, part of the Défi organizing team, gives us the lowdown on how the event unfolded.

Because of Covid-19, we had to reduce the size of the fleet. That is why we had the event in two parts, with the first part being the qualifiers for 300 racers. The top hundred out of those racers then had the chance to join the pros in the second part of the event, the Défi Superstars. In attendance were the top 30 PWA riders, some Olympic champions and also some of the top iQFOiL competitors and under 21 youths, so it was a stacked fleet talent wise. 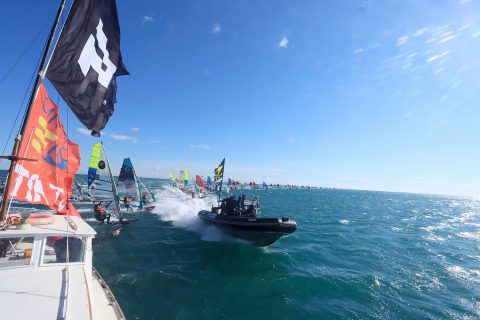 The course was shorter this year, as well as having less people on the starting line, but there were still a lot of racers on the start line compared to a normal race anywhere else, it was just a more compact fleet for a Défi. The longest reach was 5 km instead of 10 km. It was still fun and there were some amazing races. With the smaller fleet for the Défi Superstars, we could stretch out the course. Normally we stay closer to shore, but this time we made huge downwinders going out around 1.5 km, where it was choppier and rougher conditions. Défi Superstars is for experienced racers. That’s why we want to push them to their limit on the racecourses – be it the size and/or type of course. It’s clearly different from the 3-minute sprint of a classic slalom race. Marine skills are required with sometimes wide angles on the course that disturbs conventional racers.

The PWA Superstars idea came up a long time ago. The local town had enough prize money and we wanted to have the best of the best at the Défi Wind. The idea of Phillipe Bru is to help the sport and support the sailors that could not compete this year or win any prize money. Uniting the PWA and Défi is to show that we want to work together, to promote the sport. We are just sharing one amazing event through the social media of the PWA. Hopefully this union will mean a brighter future for the Défi and for windsurfing. 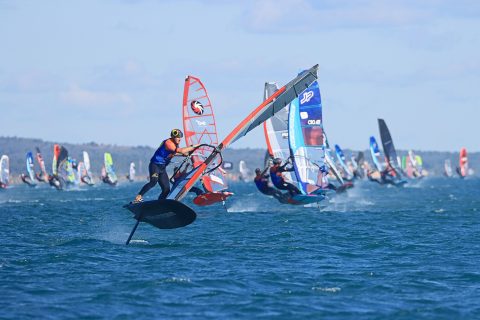 Normally we have twenty knots minimum to have everyone competing with whatever gear they have. But with pro sailors and the foil in the game, we could bring down the wind minimum to 12 knots. That worked because the event started with an unusual day of 12-15 knots and a very cloudy tramontana wind. This made the equipment choice very difficult. Foil was definitely needed. In a normal Défi we would have done nothing on that day. It was amazing to see how many people including the kids were equipped with foils and handling the rabbit starts and cross-shore winds. We had never experienced so many foilers on a start line with a rabbit start. It’s tricky and dangerous with fins, but it’s even more complicated for the racers on a foil as they can’t really stop or slow down that easily. That meant some weird lines on the approach to the start with a lot of scared faces!

The next day we had 20-25 knots and on the last day we had the cherry on the cake with 25-35 knots for the final races. People could then go on fins or foils as they wished, and a few foil specialists stayed on their foils even when it was 35 knots. There was a good mix of fin and foil in the fleet, especially in the last race where it was 35 knots. The lead was changing between fin and foil a lot, but eventually the last two races were won by fin sailors – Matteo Iachino and Pierre Mortefon.

When you organize a windsurf event you have to be lucky with the conditions and we were blessed with great wind for the qualifying and the Défi Superstars event. We had windy tramontana which is what the Défi is all about.

Nico Goyard was the standout sailor in the men’s fleet, even though he did not win overall. He is two years ahead of everybody on the foil and even when it was super windy, he was still on the foil, using a 4.3m sail. Basically, he won 3 races and had one second. He was disqualified from one race for not signing in properly and he had equipment failure two times on the first day, which cost him the victory, as there was only one discard after 7 races. He was by far the best and gave a lesson to everybody. He was not on the final podium but he was outstanding! He showed that foiling is possible in 35 knots and that the ‘fin’ is going to have some problems! Nico’s brother Thomas, who was silver medallist at the Olympics, also won one race. Albeau is still the most experienced sailor and that paid off. He knows the place and he knows how to sail hardcore conditions still. He can handle strong winds; he is the oldest but still up there! 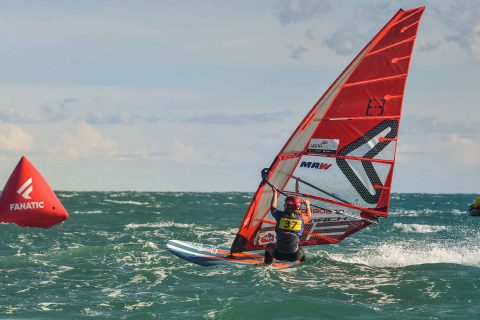 It was a close battle between Helle Oppedal and Blanca Alabau. What happened was that on the first day with the tricky conditions, Marion Mortefon and Delphine Cousin lost out on the chance of victory by taking the wrong gear. It does not mean that the other women did not deserve to win, as that is part of competition. Helle was sailing every race on her foil on a huge board, which was very impressive. It was a very good event for Blanca, who opted for fin for the last two races. She believed in herself on the last day and she knew Helle is a foil specialist and in windy conditions Blanca could use her fin board to her advantage. That is when she claimed a very narrow victory. Out of the full fleet the top three girls were all around 60th position overall. Also, in most of the races they were finishing together amongst 200 racers! 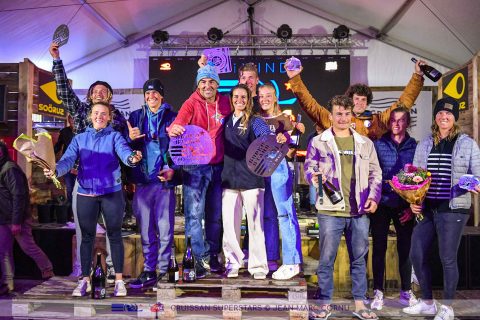 The 2021 event was a special one! The goal is to have five other Défi Superstar events around the world if that is possible. In 2022 we want to celebrate the 20th birthday of the Défi Wind with 1500 racers. We want to have that one back to normal with everyone together in 20 knots minimum of wind. We want this normal Défi to be a Pro-Am, including all the pros, so hopefully there will not be a PWA event clashing next year!