Do you know where the draft is on your wave sail, you should do, say the Duotone team and they have given the matter considerable attention in their new 2021 Super Hero and Super Star sails. Read on as they explain why they view it as a very important buying factor when deciding on your new wave sail, if not the most important one.

This feature was published in our 2021 January / February edition. To read more features like this first, Print and Digital subscriptions are available. Prices include delivery globally for 10 x issues a year!

“When building up your personal sail quiver, you should try to combine sails that have a similar feel and behaviour, even if they are from different brands. The one decisive factor defining how similar or different one sail feels/behaves to another is the position of the draft, in both levels, vertical (high or low) and horizontal (forward or back). I think that the horizontal draft position is forward oriented on nearly every freeride and slalom sail these days, so the biggest difference in feel you can find is with wave sails, as basically there are 2 different kinds of wave sails in terms of draft position. 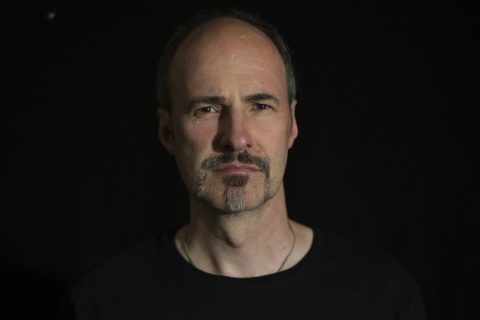 The first kind is draft centred (a balanced pull on both hands) and draft low (to keep the sail controllable). These draft centred and draft low sails are the ideal companion for multi-fin boards, since the balanced pull on both hands makes them super neutral in your hands and they shine especially in real down-the-line conditions. On the other hand they feel very different to modern freeride and slalom sails (which are very forward pulling). So if you are using such draft centre/draft back/draft low wave sails only very occasionally as your high wind flat water sails, you might be better off with the second type of wave sails.

The second type of wave sail is draft forward and up (to still generate enough low-end power). These sails work on both single and multi-fin boards. With the forward pulling feeling they are more exciting/direct to sail and have a very similar feeling to modern freeride and slalom sails. In addition they are the ideal choice for side-onshore jumping conditions, as the higher and off-centre oriented draft helps/accelerates rotations in the air (especially forward/backward loops).

So if you are looking for a direct feeling wave sail, especially for jumping, or you need a smaller sail to compliment your freeride or slalom sails, try to get draft forward/up wave sails. In our range, this is the Duotone SUPER STAR.

The brand new SUPER STAR replaces the SUPER SESSION and with 4 battens (except for size 6.2) it’s more sporty and modern. It is designed for waves, but due to its forward oriented profile position it has a very wide performance range up to freewave jumping conditions. This makes it suitable not only for the perfect days in classic down-the-line conditions, but also for the many sessions in gusty, sometimes underpowered onshore conditions.

If you are looking for a wave sail which is super neutral for down-the-line riding and very forgiving in nuking gusty conditions, try to get the draft centred/draft low type of wave sails, which in the Duotone range is the SUPER HERO. The SUPER HERO is made to perform optimally in all wave conditions around the globe and any rider weight. It’s the personal favourite of PWA wave triple world champion Victor Fernandez, and thanks to the absolutely neutral and perfectly balanced draft position, it remains stable and highly controlled in every situation. The SUPER HERO feels like a three-batten design combined with the stability of a five-batten one. 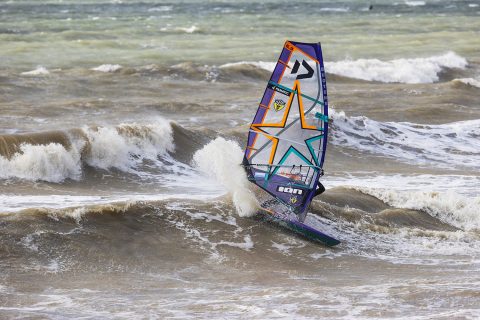 Both the SUPER STAR and SUPER HERO are pure world cup wave sails. This means they work in any kind of conditions, from down-the-line to onshore. Also, draft stability or planing, is pretty much the same on both sails. So that’s not the difference between these sails, they both work equally well. The difference is how they feel in your hands. And that arises because both sails have a very different draft position. The SUPER STAR has a draft position that is further forward and higher, around head to shoulder high. The SUPER HERO on the other hand, has the draft lower, belly to breast high and further back. This means you have the pull on both hands. Whereas on the SUPER STAR, the pull is much more on the front hand, rather than on the back hand. This translates on the water into the following differences. With a draft forward and up like the SUPER STAR, these kind of sails have an extreme and instant on and off. They basically know only two positions, full power or zero power. So there is nothing between, as soon as you slightly sheet out, the power is gone, completely off. As soon as you slightly sheet in, the power is there, full power. That’s the biggest difference. This also makes this sail, much more direct, much more agile in your hands, but also more nervous, especially in super overpowered gusty nuking conditions, like when using 3.4 and 3.7 sail sizes. Nervous is also a positive though, because they’re much more reactive on a wave, so good for super short, slashy turns. On a sail with a draft that is between your hands, like the SUPER HERO, you can gradually adjust the power. So as soon as you realize you need a bit more power to stay on a wave, you slightly sheet in, and you gradually get more power. It is more a ‘surfy’ style, where you can really adjust your turns.

Another difference between both sails is with the draft position forward the sail feels more direct and more ‘sporty’ in your hands. And with the draft being more up, the sail feels lighter in your hands, as it lifts the board. Forward rotations are easier to initiate if you have a higher draft position, especially in mushy conditions. With a lower draft on the other hand, like on the SUPER HERO, it helps to grip the rail into the water, so it’s much better for a surfing style and for multi-fin boards.

In summary, I advise to avoid combining draft forward/up sails with draft centered/low sails in your quiver as these feel and behave extremely differently.” 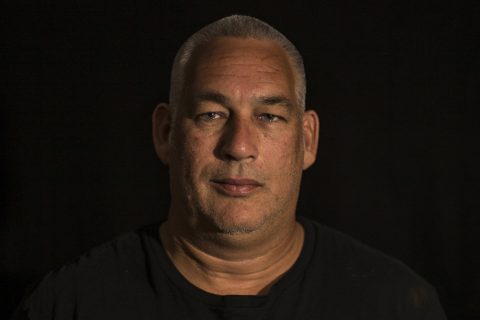 “To be clear we are discussing wave / manoeuvre sails only here. However, looking at a sail isolated from masts, boards and fins is not really possible. Over time we have gone from low volume boards with a stiff, long mast and a very powered, unstable sail, to a high volume board with a soft short mast and medium powered sail. In the past board volumes commonly used were at least 10 litres (sometimes 20 litres or more) below your weight in kilogrammes. At the moment, I recommend people to buy a wave board of their bodyweight in kilogrammes +10 litres. So if you weigh 85 kg, this makes for a 95-litre board. 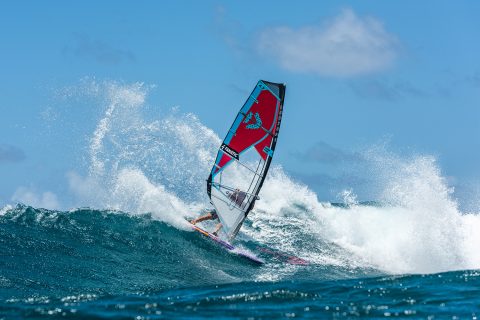 Slash off the lip in Hawaii

The current sail rigging style was very much set by Victor Fernandez who has for quite some time been using bigger boards and smaller, fuller sails, that are tighter in the leech and making up for that with a slightly bigger volume board.

What is the benefit of this style of sailing?
1. Less physical – needing less power in the rig to move and plane means less fatigue and more hours on the water.
2. More control – by being able to use the less powerful rig, you can focus on surfing the board with precision.
3. More range – if you only need to be just powered to plane you have much more room left until you are overpowered.
SUPER HERO vs SUPER STAR

Now getting into the details of our current wave sails – SUPER HERO vs SUPER STAR. The SUPER HERO is the ultimate control sail and has been designed to have control both on the wave and in the air. This is the sail you use when you want to focus on your sailing and want to forget about your equipment. Through its large separation between foot batten and batten above the boom, it inflates gradually and softly. The centre of effort is relatively low and centred, eliminating any sort of over the top pitching. 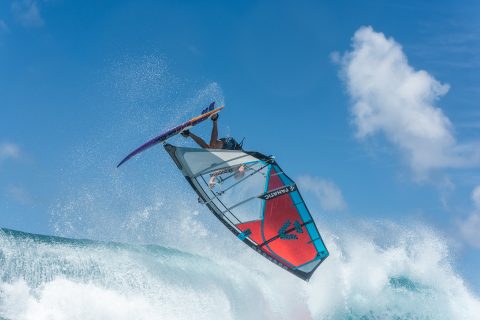 The SUPER STAR is the ultimate all-rounder and has been designed to get ultimate air time and power in your turns. This is the sail if you want to go that extra bit higher, or you want to get that extra spray out of your turn. With its evenly spaced battens and more forward and up centre of effort, power comes on and off fast. The higher centre of effort generates more lift and allows you to use that leverage in both turns and jumps.” 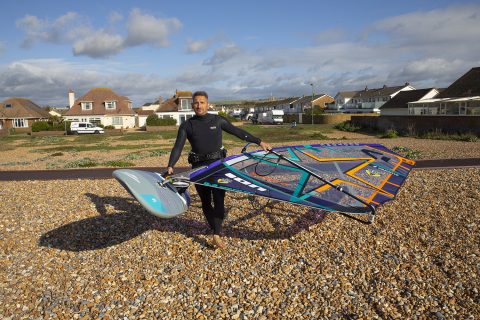 “ The SUPER STAR lifts the front of the board up, which is something I’m always trying to do. I’m always trying to get my board to feel loose and lively, so that I can turn on the smaller mushy waves that we get around Europe. With the SUPER STAR I can get that more vertical turn and snap, yet I don’t need to drive so much. I’ve really enjoyed having that snappy feel, but at the same time for jumping it gives some extra lift too on small waves.” 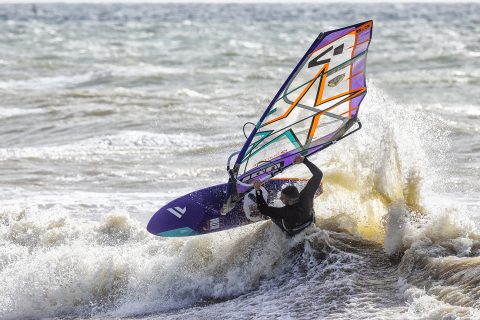 Baker in the UK

“Personally I think the draft forward or back is a bit of a personal feeling thing and there isn’t a right or wrong answer. For myself, I think bizarrely it almost manifests itself the most in how the board feels and planes over the water as much as how the sail feels. The more forward pulling sails help to keep the board a little more lively and free feeling, whereas the further back draft tends to offer more back hand grunt, but also keeps the board a little lower in the water giving a more controlled feel. So for myself using the SUPER STAR more often I really like that the board feels ‘free-er’ over the water. I can drive enough of the board’s rail into the water without the sail, so the free feeling helps me to also get away with higher rockered boards for jumping or to come more vertically towards the wave, where the more on-off power delivery is really helpful too. 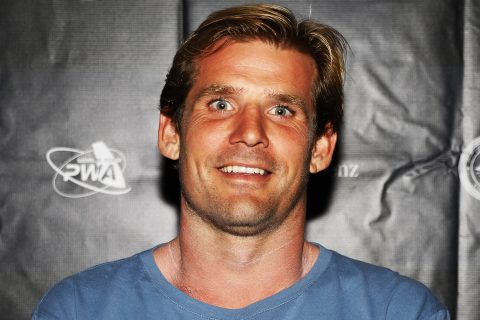 The SUPER STAR generates a lot of lift, so it pulls the board almost out of the water, which is useful for somewhere that has a lot of current for early planing and getting out. I’d say also the SUPER STAR lends itself slightly more to a thruster to turn, in that you’re coming down, and going straight back up a little bit more. The SUPER HERO is more suited to a quad, as you’re doing a more drawn out, carvier turn. The greater ‘downforce’ of a SUPER HERO helps keep the rail in the wave during a carve, and that again suits a quad. With a thruster you’re coming a little bit more vertical and you’re kind of snapping off the top and that really suits the SUPER STAR.” 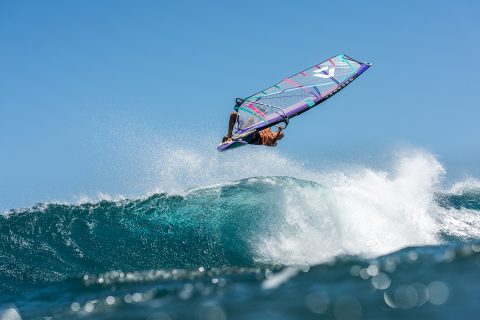