Log In
22/06/2022
by John Carter
Category
Tags: FORMULA FOIL WORLD CHAMPIONSHIPS DAY 4, Nico Goyard
Tweet
FORMULA FOIL WORLD CHAMPIONSHIPS DAY 4
The action continues at the Formula Foil World Championships with he two French brothers Nicolas and Thomas Goyard dominating the men’s class while Sofia Renna leads the women’s rankings! Photos: Elina Giolai.
Nago-Torbole (Lake Garda, Italy) – The wind, on the penultimate day of racing of the Formula Foil World Championship being held at Circolo Surf Torbole, arrived lazily, almost as if to spite the Race Committee, which had brought forward the first possible start to 11:30 am, considering that in recent days it has always blown in the early hours of the morning. Around 14:00 the southerly wind began to spread over the race course discreetly, initially reaching 8-10 knots, before gusting to 20 knots during the third race of the day. A weather warning forecast for mid-afternoon with a possible thunderstorm approaching over the race area, advised caution to the Race Committee, who did not let the fleets out on the water after the scheduled break, stopping the programme for this fourth day at three races, bringing the provisional total to 18 races.
With one day to go in the senior category, the top two positions are still firmly occupied by the two French brothers Nicolas and Thomas Goyard (European champion and Olympic silver medallist respectively), 5 points behind each other. The other duel continues between the Swiss Elia Colombo (currently third) and the Dutchman Luuc Van Opzeeland, just one point off the podium. In the first race with light wind, surprising second place overall for Polish Romanowski, now seventh in the overall ranking. Among the Youths, the Circolo Surf Torbole athlete Manolo Modena maintains a 23-point lead over team mate Jacopo Gavioli.

In the women’s category, Sofia Renna was always first, beating the other Italian Linda Oprandi (23rd and 31st overall respectively). Spain’s Del Cerro and Poland’s Dittrich always lead the master and grand master categories. Among the younger juniors, it is a pity that the Swiss Zeley only managed to arrive in Torbole on the third day of racing: considering his two seconds and four thirds, he would have given more battle to the athletes competing for the podium area, without taking into account the leader Leonardo Tomasini, who continues to race on his own, creating a vacuum behind his wake: he is now in the lead with 14 and 20 points ahead of his club mates Mattia Saoncella and Valentino Blezett. 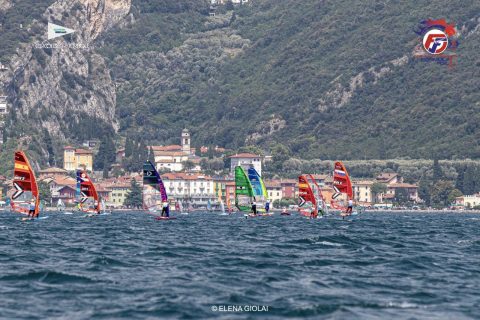 Last efforts at the Circolo Surf Torbole to conclude in the best possible way this world championship, which has always seen fabulous weather conditions. In the meantime, the first champions are arriving at the Circolo Surf Torbole headquarters to take part in the legendary RRD One Hour Classic from 24 to 26 June, a one-hour challenge between one shore and the other of the Alto Garda Lake: almost 20 athletes who usually race in the PWA professional circuit have signed up for the regatta, bringing great prestige to the event and raising the challenge to break the record both with fin and foil boards to the highest levels. A great satisfaction for a regatta that was born in 1989 and that now also celebrates the memory of Alberto Menegatti, the Circolo Surf Torbole athlete, whom so many riders present next weekend knew, sharing training, regattas, and trips.