With three days to complete a photo shoot and a last minute diversion across continents, Geraldton based photographer / fireman, Mathias Moerman, charts how a mission to capture Severne’s team and 2020 product in action turned into love at first sight with the island of Fuerteventura.

Normally when Ben Severne calls trying to talk me into a windsurfing mission, it’s the night before he wants to leave. Most of the time, like most people, I have things I’m committed to, like work or projects at home, so the answer is usually no, or something to that effect. This trip was different, I had the time booked off work and we had a plan. I like having a plan. In Australia they call me the German, I was born in Belgium but the Aussies in Geraldton have never heard of Belgium, that makes me the German.

THE PLAN
So, the plan was…. Mauritius for 2 weeks. Windsurfing…. lots of windsurfing, and photos with the new 2020 Severne gear. We had an epic crew lined up – Jaeger Stone, Phillip Koester, Iballa Moreno, Timo Mullen, Mauritz Mauch, Dieter Van Der Eken, the man himself – Ben Severne, and Thewes De Boer from Severne Europe. The forecast was looking solid and it was all lining up to be a great trip.

However, as we got a bit closer to departure, Mauritius started looking dodgy. Every 10 minutes I was checking Windguru and the colours were fading and fading. We had to make a call. Drinking spicy pineapple mojitos and playing poker with Russian tourists sounds fun, but that wasn’t the plan, the plan was simple – windsurfing was the plan.

We started looking at different spots, Fiji…. no wind, Indo…. no wind, everywhere we looked…. no wind. Then the Canaries popped up on the radar. I wasn’t overly excited about the Canaries, I had never been there, so all I could think about was trying to get decent shots in 45 knots onshore. But the forecast started looking good for a 3 day strike mission and next thing it was on….Canaries was the plan. Ben had some work in Germany, so left Australia early, Thewes left from Holland, Timo from UK, Phillip and Mauritz from Gran Canaria, Dieter from Tenerife and Iballa got to wait for us all to arrive. I pulled the short straw, a 400 km drive to Perth, flight to Doha, flight to Barcelona, 10 hour stopover then a flight to Fuerte’. By the time I got there, I was cursing Ben and his great ideas!

“The plan was simple – windsurfing was the plan.” 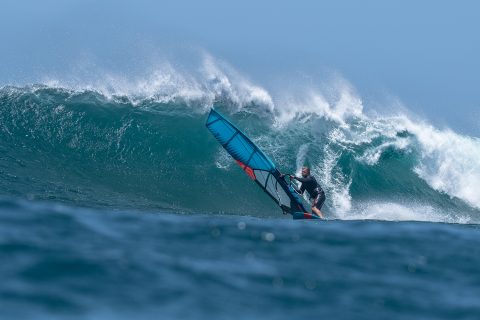 PUERTO LAJAS
Iballa picked me up from the airport and took us straight to the beach, first stop Puerto Lajas. This place looked like lots of fun. Waist to head high waves with side offshore wind. First thing I noticed was the angle of the sun. As a water photographer in Western Australia we can’t shoot wave riding after 1 p.m. because of the sunlight, this place was the opposite, awesome. Flippers on and out we went. I felt pretty relaxed, the water temp. was similar to home, the current was mild and there were no men in grey suits to worry about. In Australia sharks are always in the back of your mind when you’re swimming.

It was a great afternoon, side-off with plenty of waves, definitely not the 45 knot onshores I was dreading. Lajas has waves for all levels, the perfect spot to progress your riding and the locals were super friendly and helpful. Phillip’s girlfriend, Manca Notar, was taking photos from the beach, so it was great to see the two different perspectives from the same session. This was all lining up to be a great 3 days. After the session I was in need of a beer, and quickly, but when I realized it was 9:30 p.m., I started to panic about getting dinner. In Geraldton you’d be lucky to find anything other than fast food after 9 p.m. but Iballa assured us there was no stress, it’s all “tranquilo’’ on Fuerte’, you can get croissants and steaks at midnight! That night I woke up after 3 hours sleep, wide awake with jet lag, so I edited photos until the morning and got pumped for day two.

COTILLO
The plan was to head to El Cotillo on the other side of the island to try and find some beach break action. We had to wait for the tide to come up when we arrived, but I could already tell this place had massive potential. Really nice water colours and super smackable sections. It reminded me of a spot in Esperance, Australia, just the opposite tack and maybe a little more onshore. It was fairly heavy and everyone was hitting some big sections. The shorebreak was nasty too, so it was surprising no one broke a mast! We had a couple of hours before the wind went too onshore and brought the session to an end.

As we were packing up, we were invaded by little squirrels living in the rocks. Really amazing stuff. This place has it all, beautiful beaches, friendly squirrels, cold beer everywhere, midnight croissants and steaks, absolute heaven! 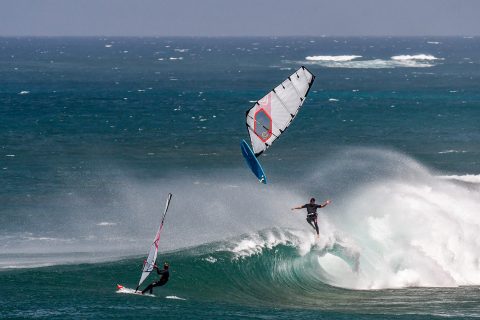 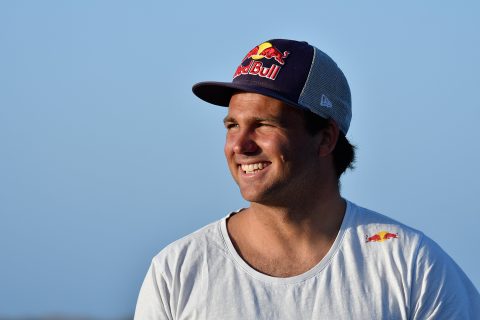 SLAB TIME
Day three was the highlight of the trip. After another daily dose of croissants, it was back to the west side of the island to have a look at a bodyboard wave that can be ‘sailable’ on certain tides and wind directions. When we arrived there was some solid sets rolling in, not massive in height, maybe ¾ mast, but very wide. Big barrel sections breaking on a shelf.

I was a little nervous jumping off the rocks. There was a fair bit of surge and you had to wait for a wave to time your jump. But if bodyboarders could do it, we could do it..or so I thought!

Phillip made it out first while I was swimming out and launched an air on the barrel section but lost his gear. I was thinking noooo! That’s it. It’s over, but magically his gear gently landed on the rocks where someone could grab it and carry it back. No damage!

Once I made it out the back, I noticed my camera was stuck on the wrong aperture setting and I couldn’t use the back dial on the housing to change it. I had to swim back in and pass my camera to Ben so he could open the housing and restart the camera. Not a good start, but luckily, we didn’t miss any action and made it back out for Phillip’s second round. By that time Mauritz and Timo were also out and the spot fired for about 45 minutes until the tide became too high and the waves were literally breaking on the rocks! 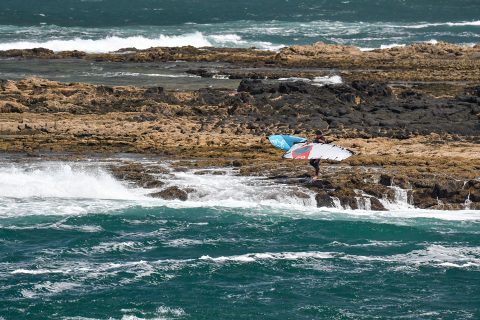 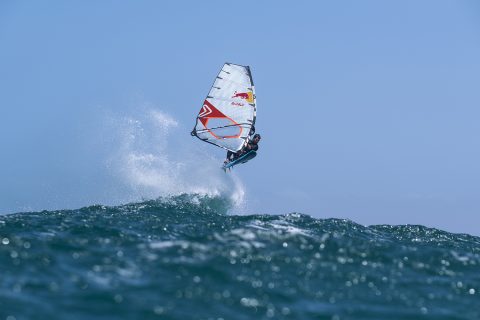 In that 45 minutes everyone had some amazing waves. Philip had huge airs hitting the barrel section, Mauritz had rail to rail hacks and Timo’s all-round skills were really cool to watch from the water. Getting in was a little tricky because the tide had risen and the surge on the rocks was a lot worse. It took me about 30 minutes to find a spot to climb back up!

After a few beers it was time to start my journey to the legendary Défi Wind de Gruissan in France. My three days in Fuerte’ was really amazing stuff, what a place, it has it all, cheap flights from Europe, good windsurfing, good food and cold beers. As a windsurf destination it really has a place on my map and I’m stoked the Canaries became the plan! I can’t wait to come back and check out all the other islands.

“My three days in Fuerte’ was really amazing stuff.”