THE SEARCH
There is something about winter storms that I find so special; waves start to break where they don’t usually break and spots appear for a couple of hours before disappearing until the next storm! We went to this remote part of Spain because of a wave that only breaks once in a while over a shoal, in front of a quaint lighthouse located at the mouth of a river.

RARE
This spot is so ephemeral, it only works at low tide, and needs a very powerful swell. To score all that together with the right wind conditions is very rare, but after a few failed missions, this time it all happened for us! Somehow there wasn’t any tow surfers riding on that day, just Pierre, Julien ‘Wesh’ Taboulet  and myself, looking at the waves breaking from the channel, taking our time and enjoying the sights.

NOW OR NEVER
At first, we thought it wasn’t windy enough, but once in a while a gust came through and it just looked so perfect! A minute later it seemed so light that there was no way we could have been standing on our boards! But we decided to try!  Simply because we were there, as were the waves, and the tide was only going be low enough for a couple of hours. 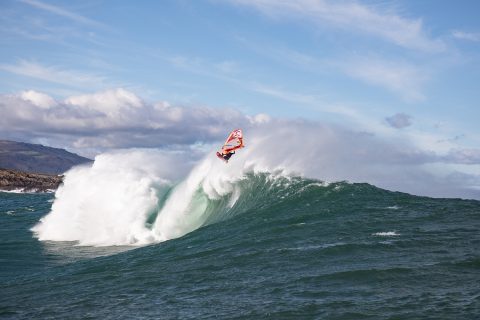 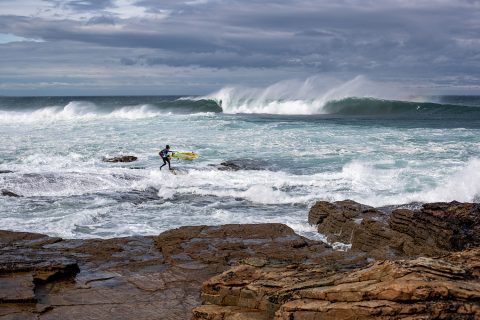 RISK VERSUS REWARD
There is so much on the line at heavy wave spots that it’s all about making the right decisions, at the right time. That is the main reason why mostly I chase those big waves on my own! I don’t want to get disturbed by anything or anyone! I feel like most people would doubt too much and make  me doubt too. With ‘Wesh’, it is different, because he always has this positive and fresh energy and the go-for-it attitude that I love. On that day we really committed together to give it a try, feeding off each other’s energy.

THE SLAB
The wave itself is a short and very intense barrel, only standing up at the last moment when the swell hits that shallow reef. That means that there isn’t much time to get going! You are on a fat lump of swell and the next second the wave sucks you down and releases all its power on top of you! And then it’s over. With the wind being very light, we had to stay extremely close to the slab to be able to drop into the wave, and we missed so many waves that we simply could not catch.

“Riding that wave was like a deep breath ‘in and out’.”

MAGIC RIDE
But once in a while the right gust came together with the sets and the magic happened! Pumping our way into Atlantic walls, dropping down over glassy water, with the lighthouse standing proudly in front of us, laying the sail down and putting the board on the rail, looking only at this huge amount of water transforming into a throaty lip coming full speed at us! Feel, integrate and use that energy, that acceleration to carve or sometimes even get airtime, and then reaching the channel fully stoked!

Riding that wave was like a deep breath ‘in and out’, during which you feel so much that the sensation of time gets altered; it is very fast but very slow at the same time. Big wave windsurfing is generally more about the wave than it is about the wind, and over the years I’ve come to realise that the lighter the wind, the more naturally we can get in sync with the energy of the ocean, the rhythm of the waves, the feeling to be present, to commit and let it all happen. 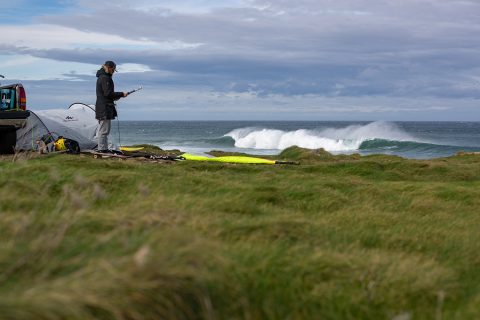 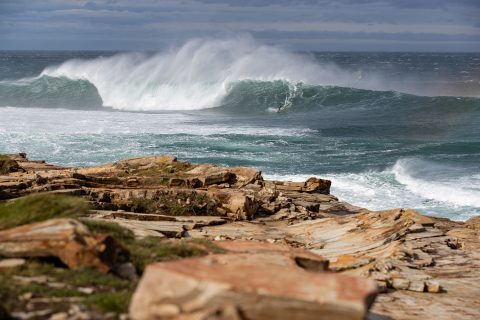 WILD
Later that day the wind suddenly picked up and we sailed another spot nearby where 10 metre lines were breaking about a kilometre outside of small cliffs. We had to launch from a sheltered beach four kilometres upwind, then sail downwind for at least 10 minutes, where I was feeling very small and vulnerable in the middle of this moving sea. The wind got so strong that the face of the wave was very choppy and we were feeling a bit lost out there, putting ourselves into some very large walls of water and navigating through huge sets to try and make it down and into the shoulder of the wave.

It was a very strong experience as there was absolutely no room for mistakes, and the challenge was simply to be there, not to perform. Pierre was putting himself very deep in the lineup with his jet ski, but he always kept his smile and stayed calm, a little bit like a guardian angel, which he was for us on that special day. In a nutshell that trip was an amazing experience, not to mention how kind and welcoming the local surfers were, they shared their knowledge of the place with us and lived the session with us too, watching from the land. 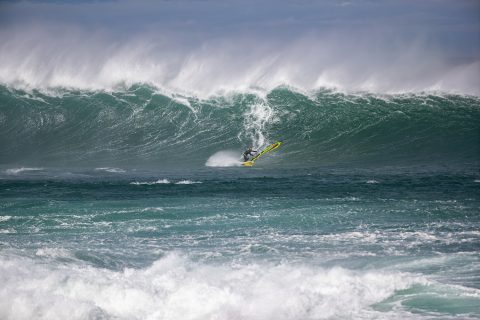 JULIEN TABOULET
First time for us in Galicia, and for me it was cool to make a new trip with Thomas and Pierre; Thomas and myself are like a family, we are riding together for 25 years now! We rode two spots; it was super windy, 3.7m for me and 3.3m for Thomas, and a nice run over big rocks to get in the water! It was impossible to ride the wave with more than 60 knots of wind on a tricky “slab”; if Thomas can’t do anything then nobody can! To get out of the water was pretty treacherous, but we survived.

The other spot was another big slab! At low tide there were some gusts, so we decided to try the beast! After a few waves my confidence was building, but after a “small” crash, I had no time to take my breath and was more than 10 seconds underwater in the dark! You know that going for an aerial on this kind of wave is another story, the water is sucking and you feel this step under your board, it is so scary and involves so much technique! But Thomas did exactly this! What a rider! What a commitment! We think that he is a psycho! But if Thomas hits the lip, he knows that it’s possible to land it, it’s never an “air suicide” with him!  We have shared so many things together in our lives already! Even after many years, the love of big wave riding keeps us going! Windsurfing will stay an awesome and original sport forever, whatever will happen in the future of this crazy world!

“The love of big wave riding keeps us going!”

FIRST MISSION
My first mission with Thomas to Galicia was on January 15th. I drove 14 hours with the jet ski on the back of my truck. It was a long drive, but what we found there was worth it. The jet ski has 3 jobs – safety cover, for shooting photos from and lastly, we simply need it to get to these remote spots. On this first mission it was a crazy 20-minute passage to get to the spot with a 50 knot head wind! At the spot the channel is very small, so you focus on where you are if you don’t want to end up on the rocks. The wave we wanted to shoot was not breaking, but we found another spot, Rinlo, that was just barrelling non-stop! Thomas a.k.a. ‘the cat’, rode the wave perfectly until a crash! I managed to get him on the ski quickly, but his gear was broken. We were a bit disappointed that the main spot Illa Pancha did not work, but we were glad we got this magical slab in Rinlo!

SECOND CHANCE
A month later on February 7th, the phone rang! It was Thomas again, calling me to see if I was up for going back to Galicia. The forecast looked way better than the first time. So yeah let’s do it, as we missed the big wave spot the last time. We wanted to come back with that box ticked! So it was on the road for another 14-hour drive, but this time Julien Taboulet joined us with his family and it was great to have him on the team, he has a good vibe and is a really talented sailor.

The first day at Rinlo was mast high but with 60-knot storm chase style winds. Julien was on a 3.7m and Thomas on a 3.3m. It was hard to take waves with the wind really offshore. The session wasn’t really good or long, it was just to test the waters before the big day.

“I had some scary moments.” 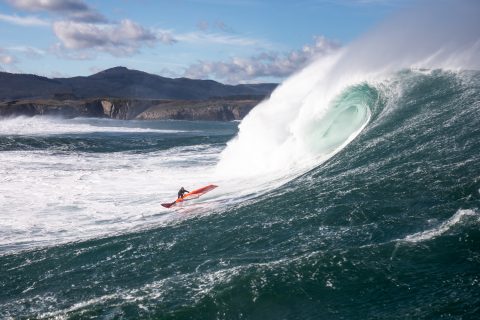 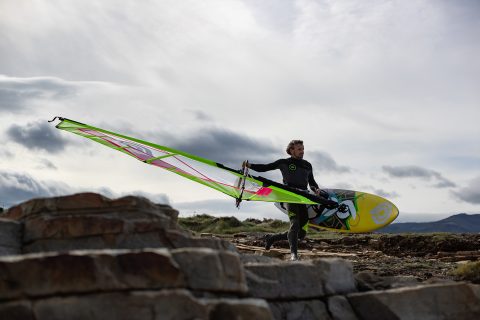 THE DAY!
At sunrise there were already sets breaking at Illa Pancha! Quickly we put the jet ski in the water as the tide would not wait for us. We packed one board each on the sled and two rigs on the side of the jet ski. It turned out to be the longest day on the jet ski I have had in my life to date!

Finally we arrived at Illa Pancha and Thomas was straight out there, dropping in super deep on his first wave, followed by a big bottom turn! It was sick conditions – huge waves and light winds. It wasn’t easy for them to take a wave, but when they did it was next level! Julien was back from Maui with a couple of Jaws rides under his belt and kept his big wave flow going by putting some heavy lines down on this monster Galician wave.

After a few hours we checked another spot. While the guys got ready I had to wait three hours in the water before they went sailing again! I had some scary moments; a big set came in and closed out the bay. I had to escape from huge waves of around 12-15 metres! Luckily, I managed to get out before the wave ate me! On the way back, everyone had big smiles during our last 40 minutes cruising with the ski to get back to the harbour, super happy that we had scored what we came for! At the end of this day I had spent nine hours on the water, I was sunburnt but stoked!