After an intense battle Nico Goyard and Helene Noesman took the victories at the iQFoil European Championship in Lake Garda. After leading for much of the week Emma Wilson took the silver medal an incredible achievement after switching to iQFoil from RSX. Sam Sills continued his solid run of results with 5th place in the men’s with Andrew Brown taking 8th. So the British Team continue to be right up there at the top of the ranking in iQFoil class as they continue on the road to Paris in 2024. Official report below:

“Frenchman Goyard, who confirms his 2021 title ahead of Nicolò Renna who took the European silver medal; disqualification at the start of the final for Dutchman Van Opzeeland who finishes third, after leading the Championship for all the final series

Torbole (Lake Garda, Italy) – An intense, exciting and thrilling week of Olympic windsurfing ended in Torbole, north of Lake Garda, for the European Championship of the new iQFoil class, chosen for Paris 2024. The Circolo Surf Torbole, with all its staff working for weeks to organise the event in the best possible way, managed to conclude this first international seasonal appointment of the highest level in the best possible way, helped by weather that ensured beautiful sunny and windy days on Garda Trentino. Participation set a record for this new class with 249 athletes (154 men and 95 women) from 41 nations. 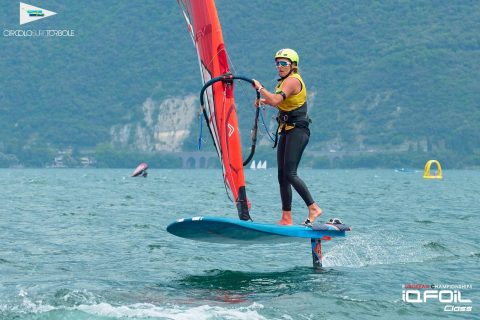 A fine performance from Emma Wilson

Olympic medallists, European and world champions of the speciality, as well as of the previous Olympic class RS:X or athletes from the propaedeutic Techno 293, but also many young new hopefuls and new talents chasing the Olympic dream, thanks to a renewed Olympic board, which has had the ability to give a real shake-up to the entire windsurfing movement with the advent of the foil. 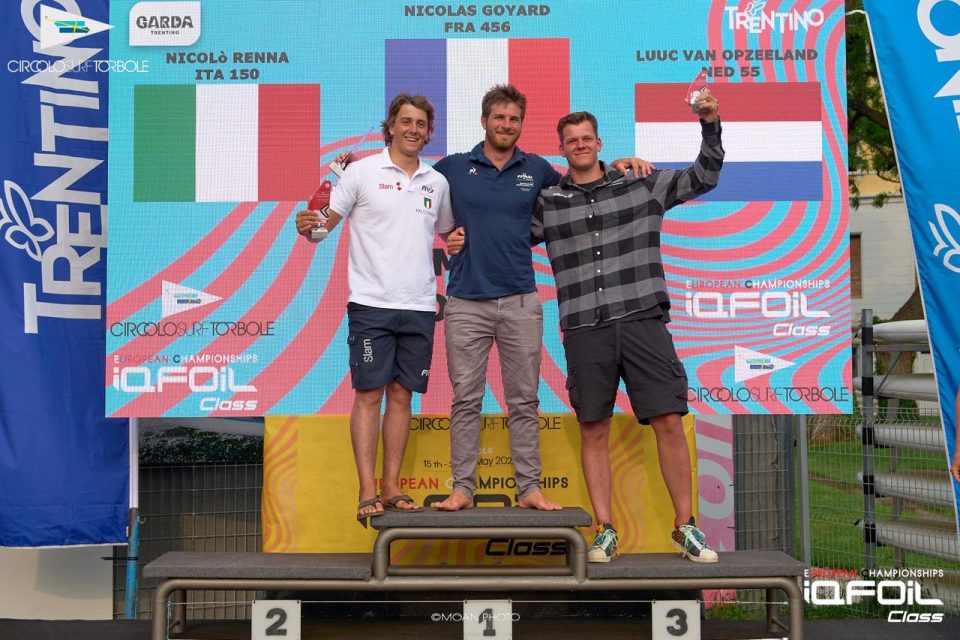 After five days of fleet course races (10), slalom (8) and marathon races (1), only the top 10 men and the top 10 women in the overall standings took to the water on Sunday, athletes who were able to maintain a high performance in all the disciplines envisaged and earn medal series. 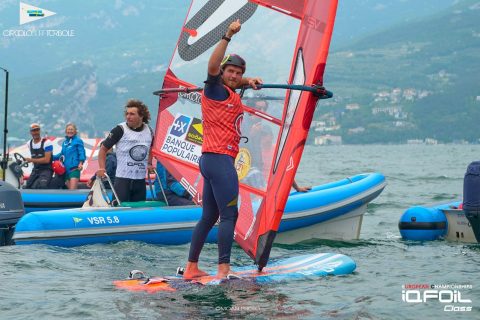 While only the first in the overall ranking automatically knew they had a medal in their pocket, with the colour being decided in the very final (the Dutchman Van Opzeeland and the Briton Wilson), for all the other 9 entered in the medal series the possibility of the podium remained open with the very last races of the semi-finals and quarter-finals: an enthralling format, which no longer takes into account the score, but the order of arrival. It was a historic day for Italy, which thanks to the young Circolo Surf Torbole sailor Nicolò Renna climbed onto the second step of the podium. Marta Maggetti from Cagliari, Italy, also defended herself well by finishing sixth: results that would have been unthinkable a year ago with the iQFoil. Nicolò Renna sailed well throughout the Championship and on the last day managed to maintain his concentration, which in the start of the final instead betrayed the Dutch athlete Van Opzeeland, leader of the ranking for almost the entire championship. A disqualification (BFD), which practically did not even allow him to race, automatically slipped him down to third place. 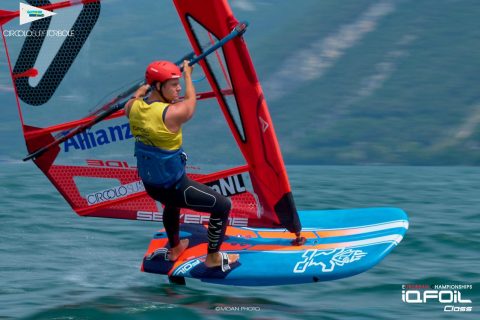 After the disqualification of the Dutchman (who had already won bronze last year at both the European and World Championships), only France’s Goyard and Italy’s Nicolò Renna remained in the final, who – after a change of course and discipline due to a drop in the wind – literally duelled it out. With a better start, Tokyo Olympic silver medallist and reigning European and world champion Goyard flew first to the finish, leaving the young talent from Trentino, Nicolò Renna, in second place overall. Nicolò, who grew up among the youngsters of the Circolo Surf Torbole, put into practice the experience accumulated during the winter months spent in Spain between training and regattas, winning a silver medal that gives confidence for the future. Among the under-21s, a category won by the Dane Johan Søe, fifth place for local Alessandro Tomasi. 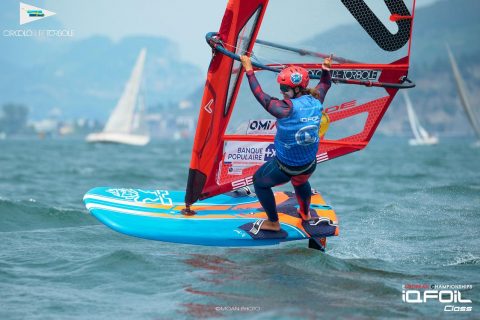 Twist of fate among the women, who started the quarter-finals with an early start for four out of seven athletes: Italy’s Marta Maggetti failed to make it through to the semifinals due to a start that was too conservative, leaving the pace to Great Britain’s Watson and Holland’s Wennekes. 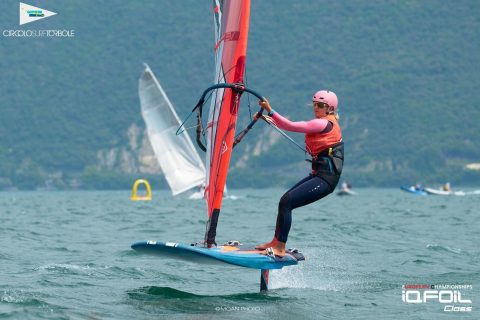 After a semi-final in which Noesmoen and Dziarnowska passed without too many problems, the final was a hard-fought affair with Britain’s Emma Wilson, leader until the penultimate day, who managed to recover a position after the stern gate and move up to second place, but without overtaking France’s Hélène Noesmoen, who sailed a perfect final, managing to repeat the title she won in 2021. Third, as on the eve of the medal series, was Poland’s Dziarnowska. Under-21 victory went to Israel’s Daniela Peleg. 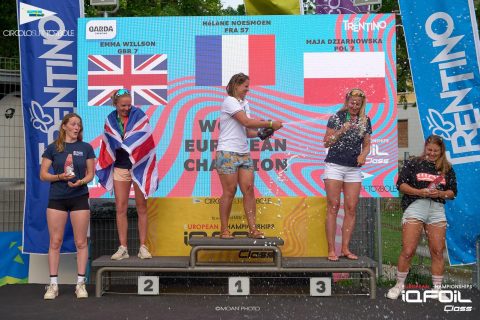 A French double then at this European Championship just like last year, with the great satisfaction of seeing the Italian and home idol Nicolò Renna among the great champions of the Olympic class, not only in the regatta, but on the podium with a well-deserved silver! 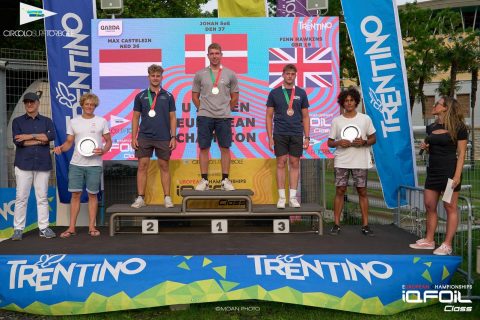 Finn Hawkins takes third in the Under 21’s

The Circolo Surf Torbole looks forward to the next international event, which will be the Absolute Foil World Championships scheduled from 18 to 22 June: more spectacle and flying boards, which now represent today’s windsurfing and sailing.”
Results: https://iqeuropeans2022.sailti.com/en/default/races/race-resultsall