Severne have been making waves with their entry into the windsurf board market. We catch up with Severne head shaper James Hooper to get the lowdown on their new freeride board – the Fox.

Originally published within the November  ’17 edition.

WS: What was the design brief and goals of the Fox?
JH: The original concept of the Fox came from Ian Fox in Victoria, Australia. He sails on Port Philip Bay where they have really short, steep chop that can be very uncomfortable to sail in. He wanted a board that could be pushed hard in these conditions and still be fast and controllable. Another part of the brief was rider comfort and overall ease of use. The board had to suit riders of all levels. The target market is people that just want an easy, comfortable board to sail and people that really want to go fast and be competitive in their chosen conditions.

WS: Vee is a big part of the Fox design. Can you explain its use in the Fox and application to freeride design?
JH: The use of pronounced Vee through the front sections of the Fox deflects the impact of slamming into chop and the backs of waves at high speed. It also helps to lift the rails clear of the water forward of the mast track to avoid tripping and getting pitched over the front. The Vee through the front sections also allows us to have a lower angle of attack on the entry rocker, which helps to lift the board onto the plane earlier for better acceleration.
There is still a fairly strong Vee through the aft section of the board, which improves stability and makes gybing really smooth and responsive by increasing rocker curve on the rails through the tail. 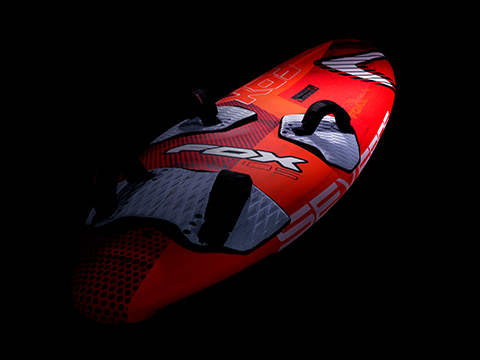 WS: How did you start the design process with no history of reference boards and what was the testing process?
JH: That was the fun part of this project, we were starting from scratch! Ian had built a couple of prototypes earlier that had some good attributes such as correct deck shapes for foot comfort and also the pronounced Vee we talked about earlier. I was working on the Nano wave boards at the time and I was finding that the parallel rail concept lent itself well to decreasing maximum width, as well as improving acceleration and stability. We brought that into the design and it worked well. We also used some other features of the Nano such as the bevelled rails and the double concaves. I had a good idea of what I wanted the board to look like to fit in with the style of the other boards in our range and we refined that over a number of prototypes and modifications. For the testing we called in as many different riders as we could of all different skill levels and weight ranges. I thought this was important to achieve an overall user-friendly board. One of our main testers was Tom Radis from Perth. He put in countless hours of water time and gave us loads of great feedback to help us with the modifications we needed to do. Thanks Tom! We started with the 105 Fox and got that one pretty well refined and then we developed the other sizes from there. We also made sure we tested in as many different locations and conditions as we could – Western Australia, Victoria, Mauritius and Maui.

WS: What are the construction and fitting features of the Fox?
JH: The Severne boards are built using a technique called compression moulding. This differs from a lot of the boards on the market that use a vacuum moulding technique. Every component of the hull is CNC’d so when the boards are laid up and laminated everything fits together perfectly. There’s no voids or imperfections in the moulding process. The Foxes have a full PVC wrap over the EPS core with Carbon construction. Load patches are added to the high impact or high stress areas. The fin boxes on the Foxes are moulded carbon / PVC for strength, accuracy and reduced weight. For the vent plug we’re using a double skin Gore-Tex valve that lets the board breath at all times. There’s no need to undo the valve, which eliminates the problem of forgetting to do it up or dealing with perished washers that leak. The footstrap screws and fin screws will now be using the Severne Hex4 system, which is a 4mm hex head screw that fits all Severne fittings on the sails and boards. This system is especially easy for screwing in footstraps, eliminating the need for a lot of downward pressure when screwing in the straps. It’s also very handy to have 1 tool for fins, straps and sail fittings! 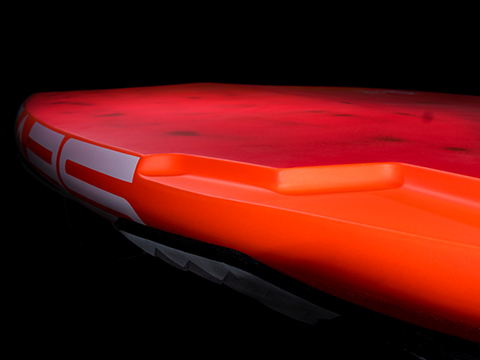 WS: What is your favourite board in the range and why?
JH: I like all of them and had loads of fun testing them and developing them. It was great to get all the feedback from different riders to help develop the Foxes. If I had to choose one for the type of sailing I do I’d maybe go for the Fox 120 because it allows me to get on the water in minimal wind when it’s not so great for wavesailing. It also handles well when the breeze kicks in and remains pretty stable and controllable in the stronger stuff too.

“ The use of pronounced Vee through the front sections of the Fox deflects the impact of slamming into chop. ”