MARK OF A CHAMPION: ANTOINE ALBEAU

Twenty-five times world champion and the fastest windsurfer in the world, French powerhouse Antoine Albeau tells us some of the secrets of his phenomenal success.

We cannot talk only about windsurfing here. I want to do the best job I can possibly do in everything in life. It is in me. I always have wanted to try my hardest and do my best, except at school! (laughs). I did not like school, but in sports or anything I like to do, I have always given one hundred per cent. 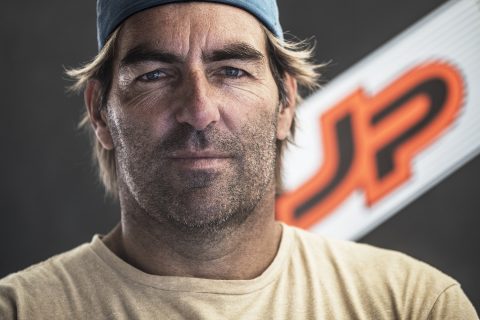 To have success I try to organise and put everything in place for my goals. Now it is a little bit different because I am in the part of my life where other things have become more important. Windsurfing, the tour and my career are just part of my goals at this stage in life. I have grown up and that is how it is, my mind is changing as to what is important. I feel something different now. Before when I was doing the tour when I was winning, I was putting everything on the side to have success. I was training hard and trying to have the best gear, just to arrive at the event, ready to win. I was trying to leave nothing to chance. Not like a teenager that goes to an exam at school and just studies one part of the curriculum and hopes that question comes up! I was not doing this. In windsurfing terms, I left no stone unturned. If you want success, you leave nothing to chance. 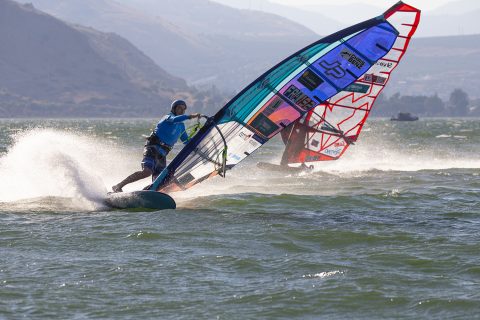 Antoine gybes on the fin!

I am not the type of guy who has an idol, I don’t know why. I like people like Kelly Slater, Usain Bolt or Roger Federer. I don’t know any of them personally, or how they train or the mentality they have. I like what they did because they were killing their sports, in their disciplines. That is why I like those three sportsmen.

When I came into windsurfing, it was an important choice that I made myself. After school at eighteen, I did not want to study anymore. I did not like to be in the classroom or exams. Luckily for me it was an easy choice because my dad was a professor, but on the side, he had a windsurfing centre. He had two shops as well. I made the choice to work in the shop and take care of the centre. I did not want to study. It was an easy decision to make because I had it there ready for me. It was not like some kids who need to study to find a job. I was super lucky to be in that position. This was a big thanks to my parents. 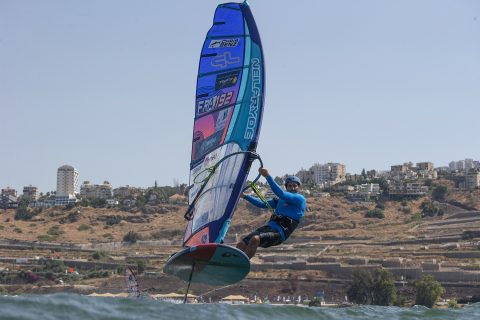 I think I am pretty lucky with my life balance. I had a different life before, but now things have changed and I have met new people. Now I have a super happy family. My wife is expecting another child also so we have some exciting times ahead. I feel incredibly lucky to have met Paula. She helped me change my life and see things differently. It was great that she also was with me on tour when I had success at events, so we got to experience that together.

I would say that when you go on the water it is like a freedom. The last three years I did not sail so much. I was really busy at home building my house. I did it all myself with my dad. So, for the last three winters I was not going on the water at all. I was building, building, building every day! I tell people that I changed my job from a windsurfer to a builder! When I did get on the water it was just to have some free time and escape from any stress. I did not really feel that I lost any of my windsurfing skills. Some people who did not sail for six months might go on the water and find it difficult and painful. Every time I go on the water, I don’t feel like that at all. Even after two months without windsurfing I feel like it is riding a bike. I just got on my equipment and flew like it was the day before. It is funny because so many people were complaining during the lockdowns in France that they could not sail. The last three winters I had spent three months without going on the water at all, so it was normal for me. I did not do any sports, no gym, no bike, nothing, only building. When I did sail it was a little hard to recover at the end of the day because also, I am getting older of course. But I am not that tired and I feel ok to compete at the highest level still. I used to sail nearly every day of the year. I think my record was 315 days of sailing. I was young and went on the water whenever I could. 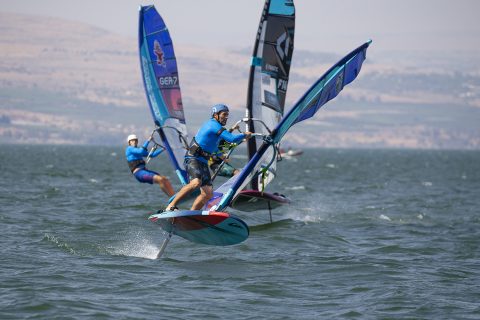 I never had any coaching on the mental side of sports competition because it was not really an option when I started competing. More sportsmen do it now and that can help them deal with competition nerves. I was lucky to have the right mentality to cope with these situations myself. I was dealing with all that pressure naturally. Maybe with the mental coaches that they have these days it would have been better, but I was lucky that I handled it. Stress is a really big part of sport, especially at the top. When you are winning every year, it builds up because the focus is all on you. I spent some winters really worrying about if I could win again. You always ask yourself if you are still going to be on top or if I can do it again? I was also getting older, so I had the physical side to deal with also. At the top everyone is coming for you, so the only way is down. The pressure to maintain that with keeping sponsors happy and the media expectations is immense. Now I don’t feel the stress so much because I know that I am less competitive. I am a little bit less prepared as well as I used to be. When I come to an event and I can see that I can still fight at the top with the best guys, that still feels amazing.

The sailor I respect the most is Bjorn Dunkerbeck. He is one of the sportsmen that I like as well as Slater, Federer and Bolt. He had a wonderful career as well. He was the ultimate professional and was always very well prepared for all the events. It was amazing that I was fighting with him during those years. One year he was not amongst the top riders, but the next year he managed to turn it around and win back the title, I think it was 2011. Bjorn was one of the most talented windsurfers that I fought with.

There is not the same mentality in the French group that there used to be when I started. In the old days everyone was friends and training together. Now there is more of a mentality in the French riders that is a bit more cliquey. They are all the time together and there is a little bit of jealousy. This I don’t like so much. With Matteo I know that he has a lot of respect for me. That is how a champion needs to be. You need to have respect for the other top riders around you and what they have achieved. You cannot be jealous of one guy who was winning for twenty years. He did what he did! If he was a champion like this it was because he deserved it. So, with Pierre, he had some attitude that I didn’t like. I don’t think he has respect for me so I just say hi, but I will not talk to him! I think he feels the same way as well. With Matteo I have no problem. I like this kind of person and I think a champion should be like this.

My life does not totally revolve around windsurfing. I like to do a lot of other sports that touch the water or go up in the mountains. I like snowboarding as well or skiing. If I don’t go windsurfing, I might go one hour on the wing and that makes me happy also. I like to escape by spending time doing something that I like. I love to play with the wind and the water. If I don’t windsurf, I will go wing foiling, kiting or surfing. Any time on the water is my escape from normal life. 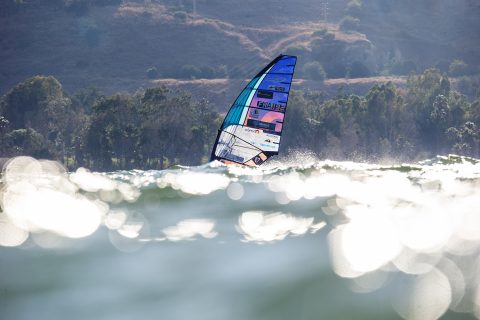 I think the talent from champions comes naturally, but you obviously also need to train. If you don’t train, maybe you will have a few successes in your career and you might win one event, but the real champions work hard for what they achieve. If you are talented and you train hard, then that is when the rewards come year after year. When I was at my peak and winning every year, I was working as hard or harder than all the other guys. It was my life!

Winning was the most important part. The prize money was never that much. For me the money was just a bonus, I was after the success and winning titles. When you win the world title then you can go home and say you are the best guy in the world! This is the best for me.

I was lucky never to have any injuries in my career. I felt that I was focused and always professional in what I did during my years on tour. That was my strength. You must be professional with the media and every aspect of the way you conduct yourself as a sportsperson. I trained hard, worked hard, and made sure I was always prepared in all ways and tried to always conduct myself professionally during the events.