As travel restrictions ease up in Europe, acclaimed writer Jonathan Moss brings us this travel focused article on his months sojourn to El Medano in the Canary Islands! 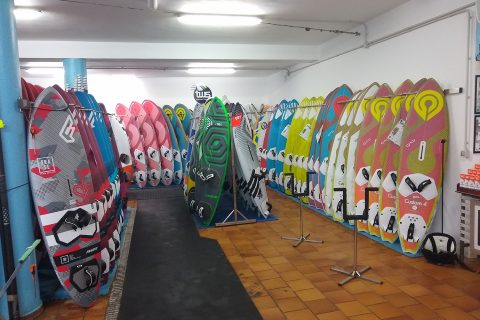 Just as Britain was about to be battered by Ciara and then Dennis, I had the good fortune of flying into El Medano. After a smooth touchdown at Tenerife South and entry through passport control, exiting the airport proved more of a challenge. With a well-stuffed quiver bag and board balanced sideways, just leaving baggage collection proved tricky. First, an ill-placed pillar prevented progress, then a narrow passageway forced unloading for a second time. Next, after taking over a large lift I reached the ground floor where I quickly found Spanish trolleys have minds of their own! After watching me lose the battle of wills a bemused cleaner brought me a better-behaved model, then pointed out a fold-up bar allowing my kit to be propped upright. Finally, hidden behind the unstable bulk I made slow, erratic progress scattering unwary women and children who got in the way! With an impatient cab driver waiting outside I thought I could finally escape, but my jutting masts wouldn’t fit under the final obstacle. Luckily a fellow traveller came to my aid and we tipped the unwieldy contraption backwards under the sliding exit doors and at last, left the airport behind! 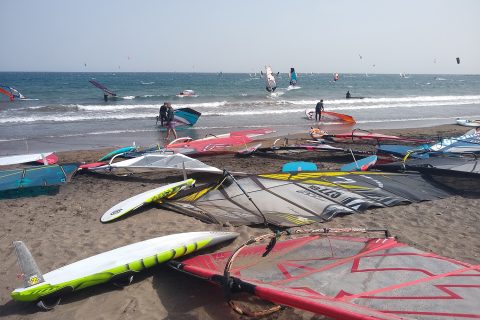 El Medano, located on the south-eastern tip of Tenerife, is blessed with some of the best wind stats in Europe. Consistent trades generally blowing from the north-east bring superb bump and jump riding to the broad South Bay, backdropped by Red mountain’s iconic cone. The wind, known locally as Alissio, gets accelerated along the flanks of Mt Teide, Spain’s highest peak. Nestled alongside the wide kitesurfing beach, windsurfers launch from sparkling black sands backed by a line of excellent hire centres. Close by are the more challenging wave spots of Cabezo and Harbour wall. 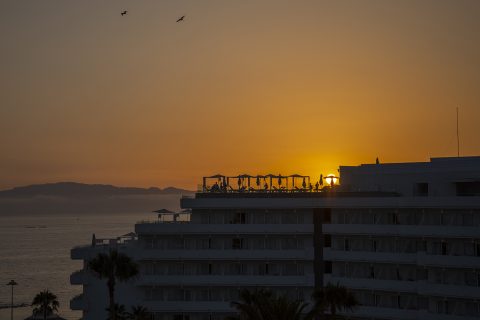 After locking my kit into storage at Duotones perfectly placed beachfront Pro centre, I pulled on a pair of boardshorts and wandered next door to Flashpoint for a bottle of chilled Dorada. With the Calima bringing unusually calm conditions there was no rush to get out on the water… manana would be just fine!

Just as Medano boasts impressive wind stats, similarly Tenerife boasts superb winter temperatures which in turn attract millions of tourists each year. Fortunately, the island is both large and diverse enough to allow Medano never to feel crowded. With its tranquil central plaza and a seafront lined with boutique shops, bars and restaurants there’s something for everyone. And it takes just minutes to stroll the snaking wooden boardwalk from Playa Grande and the centre back to South Bay’s perfect Watersports playground. 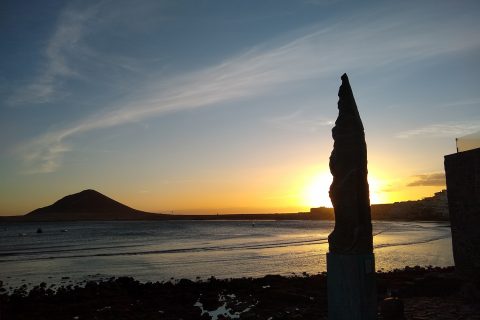 Here, windsurfers wanting to hire kit are well served by TWS and Duotone’s Pro Centre, amongst others, providing all the latest top-quality kit for hire or sale. Staffed by talented, friendly, multilingual faces most also offer all levels of instruction. Duotone even runs a weekly meet and greet, providing beer and snacks plus the opportunity to question and socialise with pro’s, sometimes even screening live video calls with world champions like Victor Fernandez and Pierre Mortefon!

When Allisio arrives, he can be brutally relentless, buffeting the island and sending non-windsurfing tourists scurrying for shelter along the length of its rocky wind-scoured shoreline. Semi-circular swell lines push into Playa Chica with smoke-like spray peeling from foaming crests. 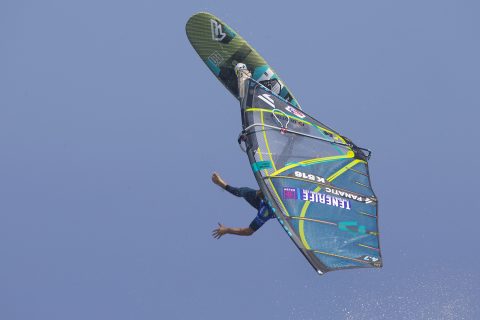 Harbour wall’s protective bulk can sometimes create a slight wind shadow, but once clear of that the blasting and jumping are epic with towering Atlantic swells pushing in and providing massive ramps, doubling up air-time as the troughs drop away. With stray kiters in the mix, it can sometimes be a busy playground, but the odd near miss always brings extra excitement!

Medano’s blue skies, warm waters and reliable winds also provide an ideal winter training ground for many European pros who spend hours charging around slalom courses here… but finding yourself blasting towards a buoy then suddenly hearing a pack of PWA racers screaming flat-out downwind can be slightly unnerving when you’re all aiming at the same gybe mark! 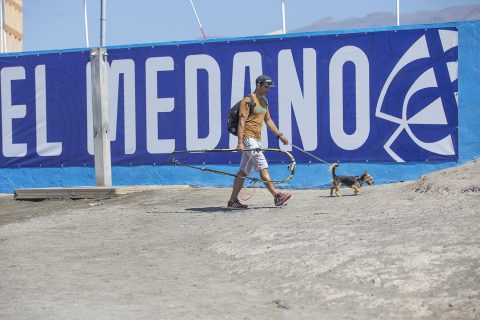 For the first three weeks barely a day went by when I couldn’t get on the water, with conditions ranging from playful underpowered cruising on an 85ltr Freewave with a 5.8, to totally maxed out my 4.7 when I should have been on something a metre smaller! With Jet2’s 22kg sports bag allowance, I’d been limited to bringing 3 sails, 2 masts and just one board. Having had so many great sessions in South Bay, if the wind was lighter or when it was really howling I resisted the urge to hire kit… despite the many temptations of the superbly-stocked toy shops!

If the wind doesn’t blow, or when your body needs a break, Tenerife offers many distractions within easy reach. Car hire is relatively inexpensive and local buses reliable and cheap. Tourist info on the main plaza has plenty of excursion advice, free maps and even give away decent walking guides. If you want to explore by road or mountain bike, both can be easily rented from Bike Point, Medano. The island offers plenty of off-road trails, but the volcanic terrain can be brutally punishing in the event of a spill!

At the islands centre Mt Teidi rises to over 3700m, so if you fancy cooling down with a hike into an otherworldly landscape this currently inactive volcano is your location, although at that altitude snow can occasionally close the park. 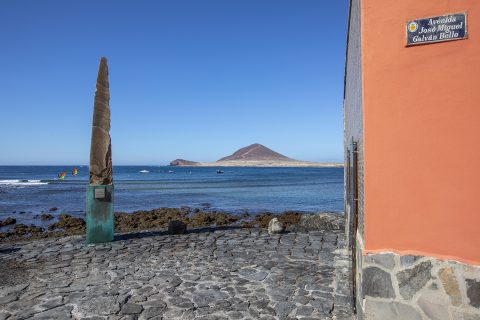 During February Carnival comes to Santa Cruz in the north. Billed as second only to Rio, island folk put on an incredible spectacle with parades, music, dance and all-night parties. Festivities carry on for a week in the capital before continuing around the island… so if you want to party like a local pray that Carnival coincides with Calima conditions!

Accommodation to suit any pocket is available in Medano with anything from budget hostels to plush hotels, with plenty of choice in between. Similarly, the compact and colourful, slightly bohemian town caters for a wide array of tastes when eating out. 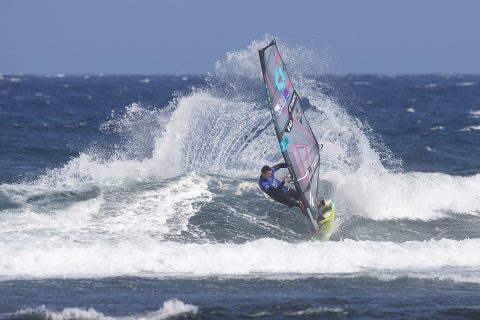 With supermarket prices similar to the UK costs can be kept down by self-catering…  although the local cerveza Dorada can be a danger, as it’s considerably cheaper! 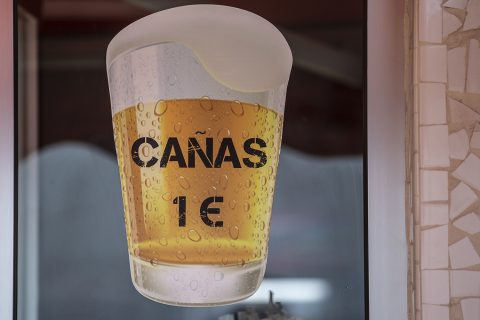 Jonathan Moss is the author of the acclaimed book Tom Tom Corner, Travel Tales from Around the Globe.