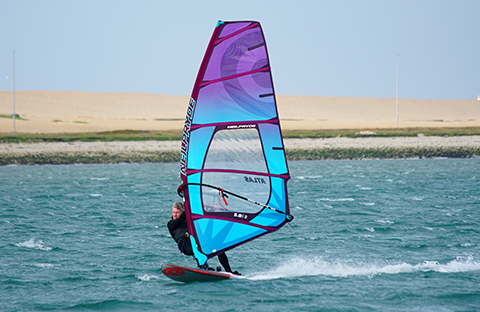 THE VERDICT
With the handling talent to match its good looks, the standard Atlas is a pleasure to use in any environment, but found particular favour when partnered with a manoeuvre-oriented platform. 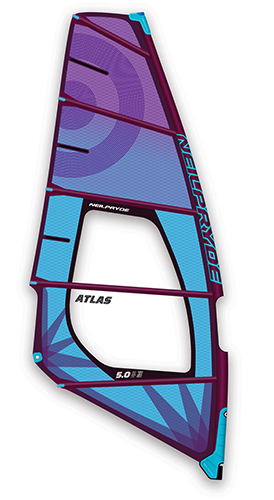 OVERVIEW
The Atlas makes a return to the Neil Pryde lineup for 2020, after taking a sabbatical in 2019. And as with its stablemate, the Combat, comes available in no less than three construction options, providing the platform for the brand to really draw attention to the quality laminates they have developed for the new season. The premium version of the Atlas is the Pro, which uses Ultra-Scrim in its upper panels – a reinforced lightweight rip-stop laminate, said to be 25% lighter than the Ultra-Web x-ply used in the other versions, and twice as strong as conventional scrims. The standard Atlas (tested here) is the same as the HD version, save for a difference in colourway (purple-blue for the former and red-pink the latter) and the fact that the HD uses x-ply in its window rather than monofilm. The Ultra-Web x-ply used around the window’s perimeter and in the upper panels, is claimed to be 40% stronger than commonly used polyester x-ply and combines with the brand’s now well-established Powerfuse concept in the tack and clew, used to help distribute loadings efficiently. Described as a “true wave sail that can also be used in flat water or bump and jump conditions”, it is a classy looking bit of kit and was tested here on a TPX100 RDM, setting with a moderate to high amount of luff curve. Both lower battens retain good rotation around the mast, and the downhaul can be played according to conditions, the prescribed tuning range clearly marked by two visual guides in the upper panel.

BRAND CLAIM
“The Atlas offers a predictable, stable and friendly ride, ideal to use in onshore wave conditions. Early to plane, the Atlas is up and ready to get into the action with efficient, usable power at all times.”

PERFORMANCE
Taking the Atlas onto the water, the two words that seemed to be repeated time and again by the team when describing the sail’s power were ‘crisp’ and ‘balance’. There’s a real accuracy and finesse to the Atlas’s delivery that endeared it to those that tried it. Light and easy in the hands at rest, there’s some play in the luff sleeve, enabling the draft of the sail to expand as pressure builds, generating a good amount of bottom end grunt. The centre of effort is locked forward in the sail, the power centred between the rider’s hands and remaining comfortable at all times, never pulling the rider to their toes. Settling into a relaxed upright posture, the Atlas covers ground effortlessly, providing useable back hand feedback to point high upwind and punch through prolonged lulls. More at home in a manoeuvre-oriented role than blasting, it feels tactile and supremely controlled at all times, yet lacks the extra gear some others possess in a drag race. Instead, the Atlas is an excellent partner for everything from a wave board to freemove platform, where its handling prowess can be fully exploited. As the conditions turn on the Atlas can be re-tuned with more tension to assure its stability, the leech twisting off beautifully whilst the forward focussed drive keeps the board pinned to the water’s surface. When the control and handling of the standard version is this well received, surely it is hard to justify the extra expense for the PRO version? But then, as with the cutting edge in any industry, there is always an element of showboating! “We do it because we can!” And there’s always someone out there who considers money is of no consequence!