John Carter and Ross Williams tell the spooky tale of a freak Halloween storm that transformed the normally sleepy waters of Shanklin Beach into mast-high monsters.

John Carter – “If you came to Shanklin Beach on the Isle of Wight in the summer, it would most likely be to bring the kids down to play with their buckets and spades. Situated on the eastern side of the island, at the far end of the picturesque Sandown Bay, it is a classic British flat water sandy beach with huts, cafés, amusement arcades and even a dinosaur crazy golf course thrown in for good measure. The possibility of wave sailing here, even in winter, is rare since it is so shielded from the elements and actually faces back towards the mainland of England. Many factors must fall into place to score wave sailing here, including tides, a complex mixture of winds to create swell, and of course the right wind direction. But, as many of us who live in sheltered spots know, every location can have its day and those abnormal days can happen when an unusual storm provides the rare combination of conditions that means your local comes to life, while many other spots are out of control. 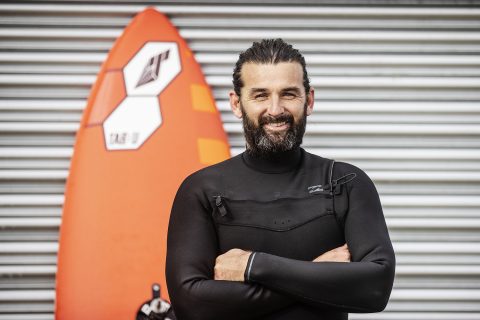 That said, I don’t think I have ever seen any decent wave sailing conditions at Shanklin, except for the odd dreary southerly gale when the wind is cross-on with driving rain in the midst of winter. And I have certainly never taken any wave sailing shots there. So come the end of October, as we approached Halloween, it was the last place I was expecting to fire up. During the autumn and winter, Sandown Bay does score the occasional day where the wind blows southerly and then swings westerly as the storm blows through, which gives surprisingly good surfing as the wind swings from onshore to side offshore. Weirdly, as Halloween approached, we had the same identical forecast predicted for three consecutive days, which in my experience is almost unheard of. Friday through to Sunday the 31st of October, the predictions were for overnight southerly gales, then swinging westerly in the day, with high tides slowly dropping during the morning. Yep, we were in for a rare treat of firing surf at home! 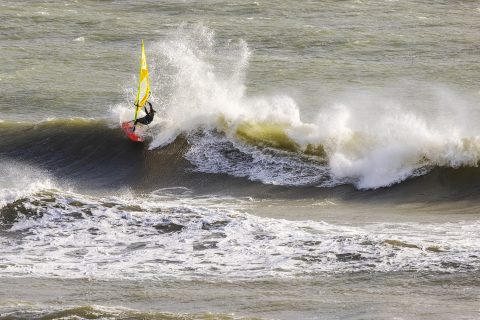 On Friday morning we were enduring a gnarly southerly gale as predicted, with howling winds and driving rain. My trick when we have this weather is to wait at home until I see blue sky looming and then go check the beach. When the rain eventually subsided, I drove up to the cliff top where you have a panorama of the bay for a quick surf check. Instead of dropping right off like normal, the wind had literally just switched and was now howling side-offshore. It was way too windy for any decent surfing, but for wave sailing it looked epic. I was straight on the phone to Ross who was down at his café, “Tradewinds”, midway along the bay and he was already rigging, hoping to catch this rare session while it was firing. By the time I made it down with my camera gear I managed to shoot two or three waves before the wind fizzled and it was back to business as usual with the expected good surfing conditions. On Saturday, the forecast was almost a carbon copy of Friday, but typically the predicted gales never really transpired and there was barely any wind or waves. 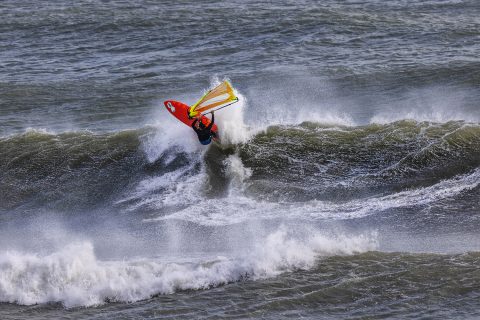 Come Halloween on the 31st of October, stronger winds were predicted overnight, but I wasn’t banking on any anything apart from some decent surfing conditions. The strongest winds must have come through about 8 a.m. from the south, with Portland Bill reporting 80 mph gusts and the wind seemed to be backing to the southeast. I was thinking about heading over to the mainland to shoot at Avon or Branksome, but Timo Mullen rang to tell me two trees had blown down in his garden and a rogue flying trampoline had just missed his house. With the weather that wild, I thought the ferries were all going to get cancelled, so I decided to pack all my camera gear and go get an eyeball on my local bay to check out the conditions. Looking down from my spot at the top of the cliffs, the sea was just a cauldron of whitewater with the storm force onshore southerly waves battering the local pier. I have lived close to this bay for over fifty years and aside from the 1987 hurricane, these were some of the biggest seas I have witnessed at Shanklin. Over to the west I could already see a line of blue sky which no doubt would mark the switch in the wind, maybe we might get lucky for Halloween and score a freakish windsurf session. 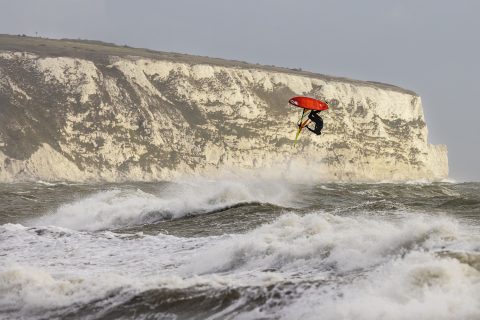 This time round I was on the case and called Ross to see if he was up for another session. Of course, he was already getting psyched up for windsurfing, but weirdly he had been cursed by the fact the starter motor had just gone in his van, so he was waiting for a tow to get it bump started. Eventually the wind switched to the west and the sun came out, but it was extremely light. The waves were easy logo to mast high and wind side-offshore – it was absolutely pumping! 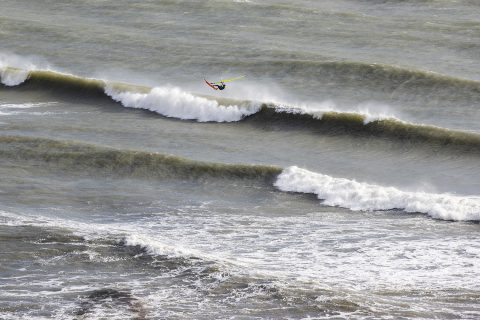 I headed down to Ross’s café to try to help start his van and eventually it spluttered into life. In order to take time off work Ross then needed to go pick up his chef (who doesn’t drive) and sort out provisions for the café so another frustrating hour went by before he was back and finally ready to hit the water. It felt like we had a spell of bad luck preventing us from hitting the water, I normally call this the black cat at photoshoots! By the time Ross was ready it seemed like the wind was starting to fill in, although it was still extremely offshore. We decided to drive along the revetment wall to check out the conditions at Shanklin where the coastline slightly juts out and where we could just catch the wind lin 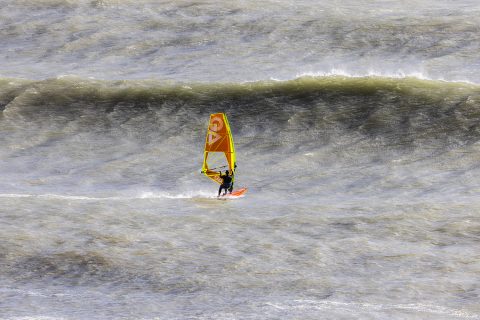 Up at the launch spot the wind was almost next to nothing on the inside, but out where the surf was firing there seemed like enough breeze on the water for float and ride. We were not sure if it was sailable, or even if Ross could make it out, but he was determined to give it a try. Were these conditions a trick or a treat? We were about to find out! It took about twenty minutes of challenging work for Ross to swim and then drift out to the wind line, but once he was out the back it looked like he had enough power to catch the sets. Straight away he tacked onto a bomb, shuffled into the straps, and charged down the line where a juicy bowling section was begging to be hit. Ross hit the section with perfect timing and flew into a huge aerial. With that amazing first wave under his belt, Ross was headed straight back out for more. The tide was already on the retreat and from my experience, the next hour or so would be the best of the waves before it would be game over. Ross knew the clock was ticking too and was on the case, navigating the tricky conditions like the pro he is and picked off some beautiful glassy waves. After a busy summer working in his café, I am sure a session like this was just what the doctor ordered! 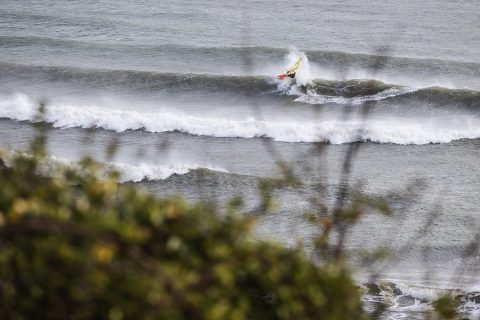 Bearing in mind I have been shooting windsurfing for over thirty years and living in this bay for even longer, it was incredible that this was the first time I have ever seen conditions firing like this. I guess you could say this was our spooky, once in a lifetime storm and Ross even had a bright orange sail to go with the traditional Halloween colours.” 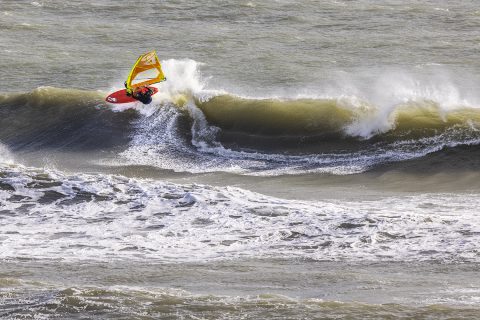 “I don’t think I have ever tried to sail at Shanklin in those kind of offshore conditions before, but the waves were looking so sick it seemed a waste to drive away and not give it a try. It looked epic cross-off down-the-line, but we were just not sure if there was enough wind. I am glad we did not drive away that is for sure! It just made sense to give it a stab. The wind overnight had even backed southeast, which was perfect to build up the wind swell. Then it veered around as it can do when low pressures pass over us in the UK. But for Shanklin, I don’t ever remember seeing it anything close to as good as that before. This was the perfect storm. It does happen, but not as big as that. It was legitimately as good as wave sailing gets!

I didn’t want to take kit that was too big, as it can be hard work when you do hit the wind line. I took my 88-litre board, which I know I can float and ride in anything. As for the sail, I took a 4.8m IQ, which covered me for a wide wind range. Most of the best waves came with the right amount of wind for that setup. Sometimes there was zero wind, but out the back it was windy. If there had been a full PWA crew there I think we would have seen some serious shredding going down. I am a bit out of practice, but I really enjoyed it. It was rare conditions, but it was epic. 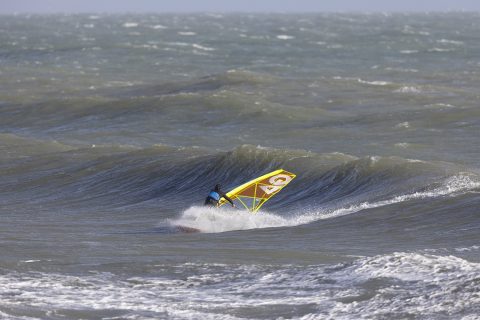 The fact my starter motor went was typical luck for me at the moment as I have been so busy this year running the café. I was all prepared for the day, but that starter motor issue nearly scuppered all my plans. It was like the black cat throwing in one final curveball to keep me off the water; thankfully in the end, we were treated to an amazing session. For the south coast of the UK, it was epic. It was just like sailing a proper down-the-line spot. Getting out was tricky and I took a few in the face, but it was worth it when I was out. In the end Shanklin delivered like I have never seen it before!”