Had quite a few questions yesterday from people asking about the Olympic racing, the techniques and what all those darn ropes are for. I have spent all of 3 hours on an RSX so I am no expert – but as we head towards the medal races, let me try and answer a few. 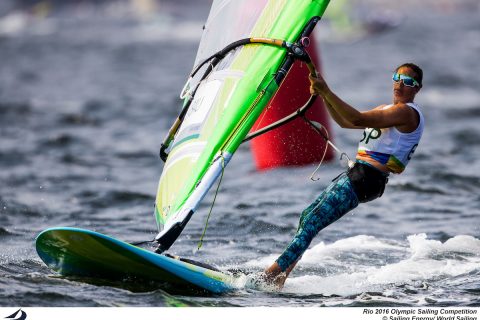 THE ROPES! Out there they have 2 instantly adjustable ones, the outhaul and their harness lines. 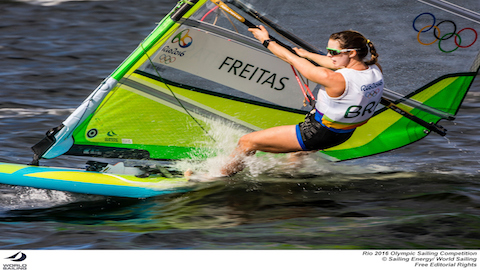 THE OUHAUL. On the downwind leg, to keep planing on those marginal breezes it’s all about power so they let it right off to bag the sail right out. But it’s not quite as simple as ‘let it off for downwind and pull it in for upwind.’ You need loads of power for upwind power too, so they have to feel when that power is becoming too backhanded and lateral and over-powerting fin and/or daggerboard – and then pull it on just enough to sharpen the entry to the foil and make it more effcient.
And of course it also depends on the wind strength – they’re not going to bag out a 9.5 (8.5 for the women) if it’s 25 knots! 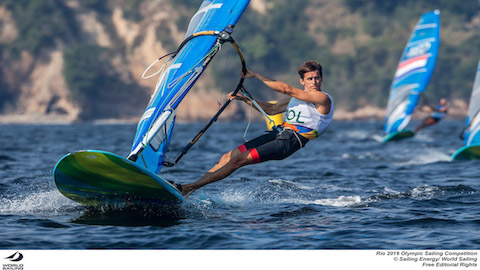 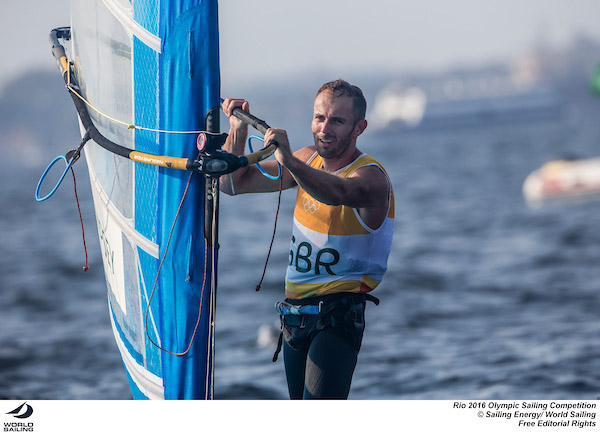 THE HARNESS LINES. This is really interesting and relevant to all. Heading upwind around the leeward mark, you’ll see most shorten their lines. By shortening the lines, they lift the hips and that allows the windward edge to lift and the board to rail up (i.e. ride slightly leeward edge down) which gives the fin/dagger a better angle of attack). Also upwind, the sail is sheeted right in – so with a long line, their backsides would be be scraping the waves and they would be driving too much power laterally into the rail = spin out.
Downwind they lengthen the harness line because the sheeting angle is more open and they want to get as far away from the rig as possible, to sail the board from tail, reduce drag (and resist a catapult. 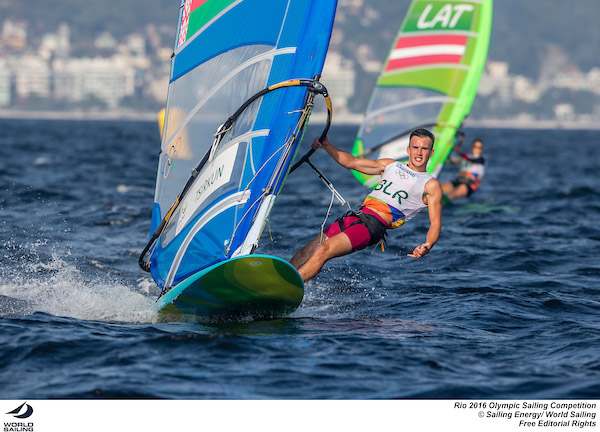 AND WHY ARE THE HARNESS ENDS SO CLOSE TOGETHER?
It makes them super sensitive to sail trim when hooked in and gives maximum scope to work the sail (sheet in and out) when in the harness. 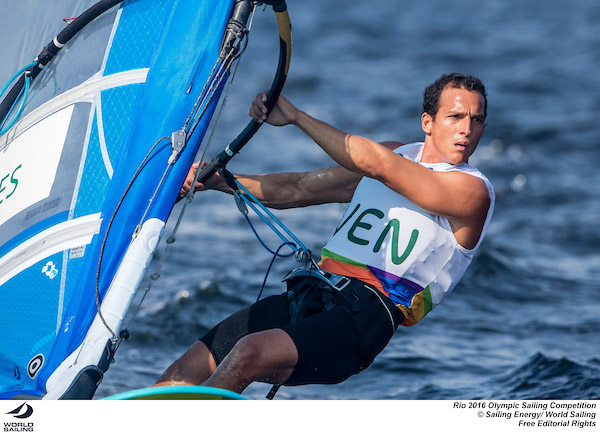 UPWIND DAGGER or FIN?
The RSX, love it or hate it, is a very versatile craft so designed that it can perform in planing and non planing conditions – so you can sail it upwind like a slalom board on the fin – or as Raceboard using the dagger. They’ll point higher with the dagger but go slower. These guys are so good that they’ll get rid of the dagger upwind, pretty much as soon as they’re planing. Yesterday with the wind puffing all over the place was really tricky and you saw them changing modes on the beat, dropping the dagger and sliding the track forward as they dropped into the holes. 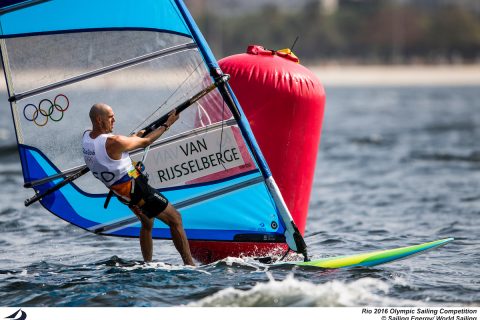 THE GYBES. Gybing from broad reach on the dead downwind leg, in 12 knots of breeze AND staying planing, is really skilful stuff – it’s SO easy to stall. The lessons to be learned for all is how early they change feet and rig to maintain fore aft trim and get power back immediately.
DUCK GYBE! Yes – yesterday van Rissleberg, while leading, chucked in a duck gybe as he rounded the mark on the way to the finish. Was he showboating?! Hardly – it’s not the gybe you generally favour with monster sails (booms too long) but if you can do it, you start the sail flip on the original tack so get power back earlier just as you turning through the wind. Risky – but it sure paid off!

I’m doing this because i want people to appreciate how fit and technically brilliant our sailors are. They make the RSX look like a light , squirrily wave board and believe me it’s not! They are true Olympic athletes working within the finest margins.

I don’t have a pic of me sailing with Nick or Bryony – but here’s one of me and Penny WIlson (nee Way) our original Olympic icon, training in another Millennium! 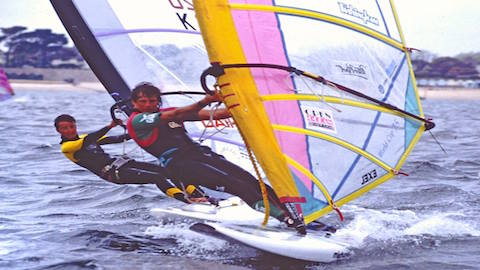