From our April edition of Windsurf Magazine, John Carter tells us why a session at the Bluff, Cornwall with Timo Mullen and Ian Black, was just the tonic for the ills of our times.

Looking back on last year, there were some positives. Many of us re-evaluated what things are important in our lives, spent more time with our families and found innovative ways to adapt and ride out the storm. Some of us spent extra hours exercising, rediscovering old passions and enjoying the amazing spots we have in our own country rather than abroad. 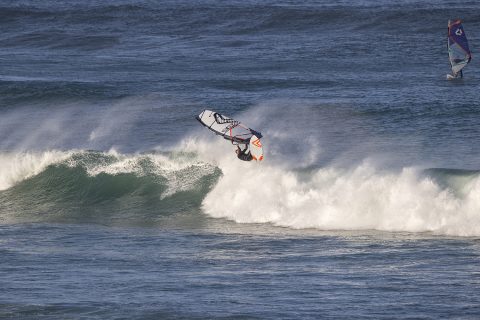 As for windsurfing and watersports in general, the UK’s popular spots saw an incredible resurgence in numbers at the beaches. Many rediscovered the benefits of being active through windsurfing, the therapeutic effects of hitting the water and the positive effects it had on our mental wellness. The great outdoors and our beaches become a place of solace, with many dusting off their old gear or purchasing new kit to enjoy the rush that windsurfing provides. Pre-pandemic a lot of us had been caught up in the rat race and one of the things that Covid-19 taught us was to enjoy life to the full nd live for the moment. Consequently, the likes of Witterings, Gwithian, Avon and many of the other popular spots had fifty, sixty or more windsurfers out on the decent days, as well as kites, wingers and surfers enjoying the health benefits of watersports.

Personally, it was a difficult year as a photographer, with pretty much all of my regular jobs at photoshoots and events around the world cancelled and many restrictions preventing travel back home in the UK. I was looking for a high to end the year and come mid-December on the home run towards Christmas, there was one final forecast for 2020 that had me excited with a huge 6 metre swell forecast for Cornwall, combined with sunshine and twenty-five knot southwesterly winds. It was time to make a plan! There were no restrictions in place at the time, so I was able to catch a ferry to Southampton, jump on a train and then ride down with Timo Mullen, leaving his place in Poole at 5 a.m., to be down at Gwithian by 8:30 a.m. or so for the outgoing tide and predicted strongest winds. 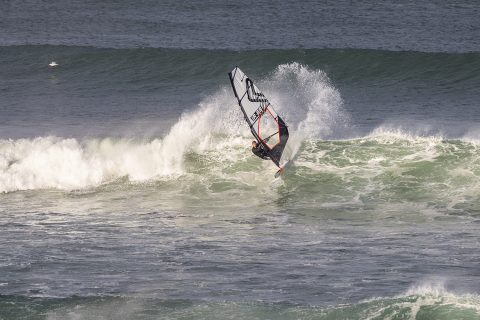 Timo carving in the light winds

Having spent about nine hours in a mask on boats, trains and in Timo’s van, I was hoping that the journey to Cornwall would be worth it. Word on the street was that the wind was quite southwesterly, meaning our most likely location would be the Bluff. I was already happy as that is my favourite part of the bay that stretches all the way up to Gwithian for shooting. When the wind swings southwest, Gwithian can become a tad bumpy and side-shore, but as the bay wraps round to St Ives, the angle swings more and more offshore. Mexico’s is kind of in the middle between Gwithian and the Bluff and has become very popular despite its steep walk down to the beach, but when the wind is close to SW or WSW, then the Bluff is normally the go-to spot. There is a decent sized car park in front of the pub at the Bluff, but make sure you pay the correct amount of parking as it is a well monitored machine! There is a huge difference between high tide and low tide at the Bluff, as well as the effect of the river mouth to contend with. Most locals prefer mid tide as low tide can break very hollow onto the sandbar! 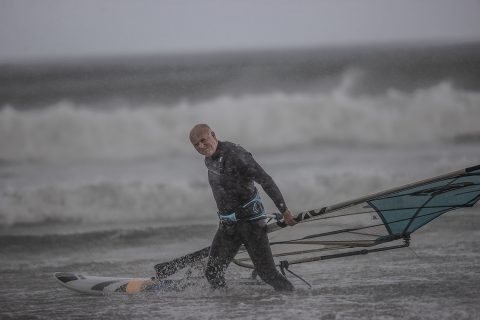 It was no surprise that the car park was jam packed when we pulled in. It doesn’t take a rocket scientist to read a decent Cornwall forecast these days and it looked like plenty of sailors had made the journey west to make the most of this day. It looked like we would be sharing this session with forty or fifty other windsurfers and kites! En route we had been on the phone to our man on the ground, Ian Black, who casually yawned, “I will be down about 11 boys, as it never gets windy until about then anyways!”

Funnily enough, Blacky was dead right. The Bluff was definitely firing, but on first inspection it looked much more like a surfing day than a windsurfing one. The sets were easily logo high, but the wind was barely enough to throw any spray as they detonated on the sandbar. Local sailmaker Ian Ross was the only sailor on the water, drifting around through the waves in about 8 knots of wind. According to local guru kitesurfer, Lee ‘Pasty’ Harvey, who windsurfs too, he had dropped into a couple, but it all looked like the amount of effort involved was outweighing the rewards. Nevertheless, Timo was adamant that he had the kit to cope with these light winds and confidently rigged up a 5.7m on his big board. After driving four hours there was no way he was going to not give it a try at least. So by 9 a.m., Timo was rigged and ready and his actions had encouraged half the car park to give it a try. Meanwhile Blacky was most likely back at home enjoying a nice cappuccino and frying up some bacon! 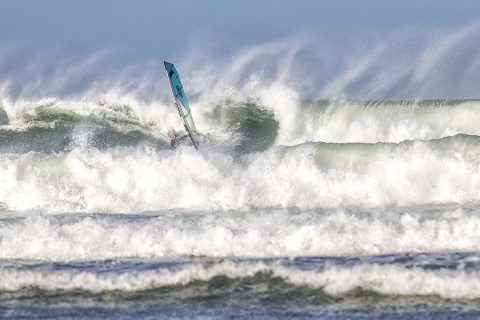 Byfield in the mix

For the next two hours there must have been twenty guys out on the water, all giving the conditions their best shot. After all it was a beautiful day, glorious sunshine, clear air, a pumping swell and just enough wind to drift out through the impact zone. One after the other, most sailors gradually threw in the towel, obviously Timo not included! He was persevering come what may! 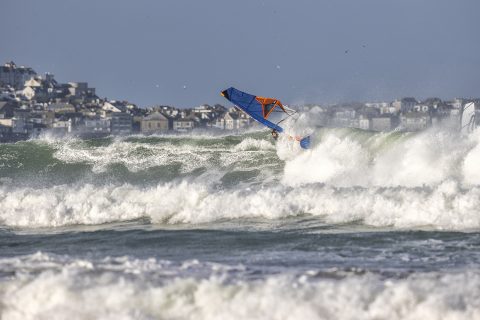 Hitting the lip at the Bluff

It was one of those frustrating sessions where you drift out for twenty minutes, are barely able to pump on a wave and then end up getting washed with a high chance of breaking your kit in the impact zone. To be honest I was quite happy just to be outside in such a beautiful location enjoying the fresh air and watching the sets peel across the river mouth. I had probably taken about 50 shots during the course of two hours so far and was pretty sure not a lot of them were keepers! But after the year we all had had, I was not going to start sulking about the lack of wind. The bigger picture was that I was glad to just be out and about, keeping my social distance and enjoying the day. 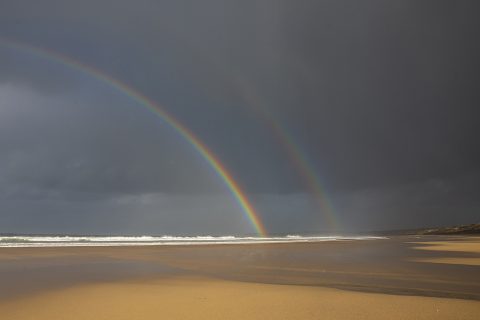 By 11:00 a.m., Timo was one of the few left wallowing in the light winds and I had made my way to the water’s edge to try and change up my angle of shooting. The conditions had not really improved and the tide was rifling out. Cue the arrival of Blacky, along with an ominous looking black cloud that stretched all the way from St Ives across the horizon. Literally as he hit the water, the heavens opened and I had to brace hail and torrential rain for about fifteen minutes. 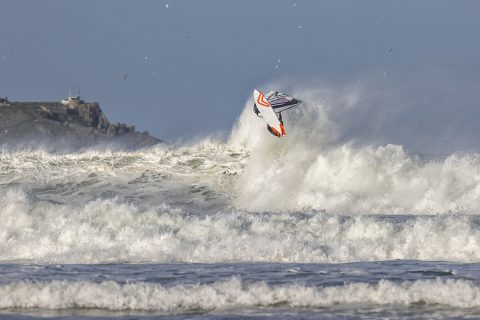 My hands were so cold they had gone numb, but the cloud brought wind with it too, plenty of it! Who knows if it would be short lived or not, maybe Blacky’s black cloud would be the real kick off for the day. Sure enough, as the rain slowly cleared I could see blue sky beyond St Ives working its way towards us, while down towards Gwithian a huge rainbow framed the landscape. 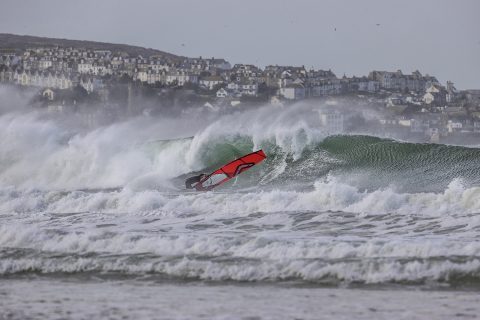 As the sun cleared the wind kicked in and suddenly it was game on for those left on the water, which was literally Timo, Blacky and one or two other latecomers. What potentially a few hours ago could have been one of the busiest sessions of the winter judging by car park numbers, ended up being just Timo and Blacky and a few others scoring epic Bluff conditions all to themselves. Blacky had either called it or been incredibly lucky, while Timo’s perseverance had definitely paid off, although now he was going to have to dig deep to find the extra energy to keep sailing now it was game on. 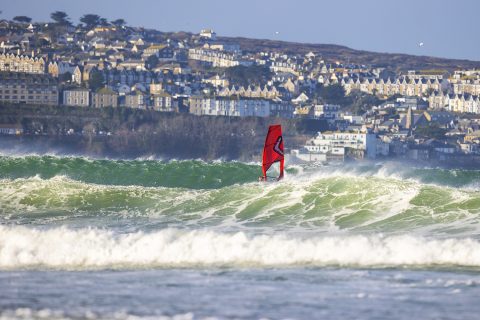 So, from a day I had pretty much given up hope of scoring any worthwhile shots from, our luck changed at the stroke of a black cloud, and after that we pretty much dialled into epic Bluff for the next two hours. Both Timo and Blacky were lapping up logo-high peeling cross-off conditions and could not believe that they had scored it with just a few others out. I think the call must have gone out that the wind had kicked in at Marazion on the other coast, so most other sailors had headed over there for a jump session, while the lucky few were left to mop up the perfect waves at the Bluff. 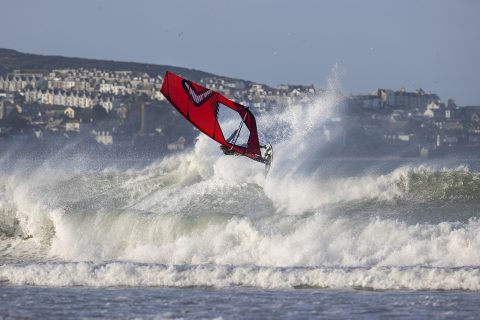 There were a few sets which were butter smooth and I remember seeing Blacky appear from the midst of a massive set and throw a huge rail carve, bottom turn combo that I am sure he must have been thinking, “If Carter didn’t get that shot, I will kill him!” That is one thing you can rely on with Blacky, that classic bottom turn driving the rail photo and today he was doing it with style. By 1 p.m., even Timo was toasted after scoring so many waves and big airs and he reckoned that it was one of his best sessions of the whole year! Blacky was grinning from ear to ear, as was Mike Byfield and the rest of the crew who were lucky enough to score the session. 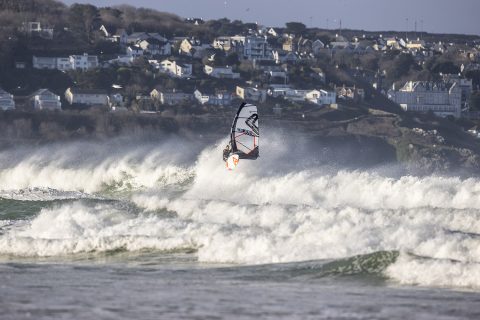 After a challenging year, initially I had been happy to just be out photographing for the day, but to have the luck turn in our favour felt like a real injection of positive energy. Sometimes a decent windsurfing session is all that is needed to raise your spirits and we drove back home finishing the year on a high – mission accomplished! 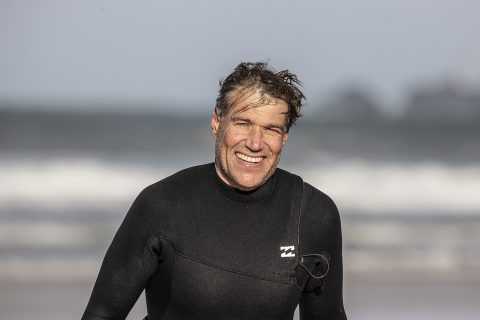