We last caught up with Jono Dunnett on his round Europe windsurf adventure as he landed in Istanbul. Here he picks up the story as he continues his epic voyage, venturing further into the Black Sea along Turkey’s coastline and into Georgia. Read on as Jono reflects on his journey.

Intuition, and a willingness to read meaning into the appearance of dolphins, had persuaded me that a winter break was advisable. There had been various things unsettling me: the potential for very harsh Black Sea weather, the leaky condition of my drysuit, a worn out connection between board and sail, and the unresolved problem of how to sail the heavily transited Bosphorus Strait without getting arrested. So, from Istanbul I skipped back to the UK, to see family, and also to preserve sufficient time on my visa for the sailing ahead. The break gave time to consider that whilst reaching Russia remained the goal of the sailing, it didn’t provide a sense of closure to the journey. And I was still having persistent daydreams about the possibility of ending the journey where it began, at Grense Jakobselv on the Norway-Russia border. Was there a viable river / sea route through Europe back to there? Perhaps. But I conceded that I didn’t have the appetite for the uncertainty such a trial would involve. This liberating admission spurred some research. Then I stumbled upon the EuroVelo cycle network, and in particular EV13, the Iron Curtain route, which goes from southern Europe right up to Grense Jakobselv. If the shoe fits…

I also heard from Edhem Dirvana, a Turkish sailor and fantastic guy with connections to the coastguard, press and navy – result! – Bosphorus permissions sorted. Then a replacement drysuit, fin and extension arrived, and I’d run out of reasons to wait. Before getting hooked on the easy life, it was time to do cold Turkey.

BOSPHORUS
Mid-March and Edhem has everything under control. The day after returning to Istanbul I sail to the Asian side of this Eurasian megacity. Then we search for a day with a southerly wind to help beat the Bosphorus current, a continual stream from the Black Sea that flows at its strongest at this time of year. But with no southerly wind forecast we instead settle on a day when a moderate northerly looks likely. Coastguard and press are notified. The cameras roll and seconds after launching I fall in. I can sense Edhem’s concern, his reputation being on the line here as well as mine, but it goes better after that. The current in places matches that of the renowned tidal races. In old times they towed boats through here. But now the banks are walled and the water races through. Opportunity to escape the current is limited. Thank God there is decent wind. Even so, some parts are a real battle. If tactics are wrong, the wind lulls, or the main channel is sailed, then progress is negative. Each bend is hard fought. We link a few corners and make it under a bridge, a campaign victory! Then another few hundred tacks, and the second bridge is behind us. We reach halfway, where Edhem has arranged for me to stay at a waterside house with a quay. Our coastguard boat escort peels away.

A week later, after some media training from Edhem, and a presentation I make a hash of but learn from, and again with north wind, we complete part two. It is easier this time. The channel is wider and there are fewer ferries criss-crossing the strait. The third suspension bridge is the last. Edhem has been with me all the way and follows out to where the first Black Sea waves are felt. For me it’s a big deal that the route has remained 100% continuous and independent. However far I get, the Bosphorus is now part of the track. Thanks Edhem. 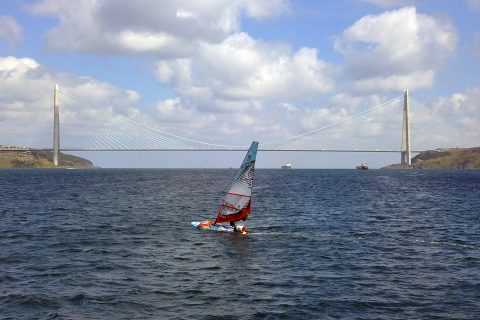 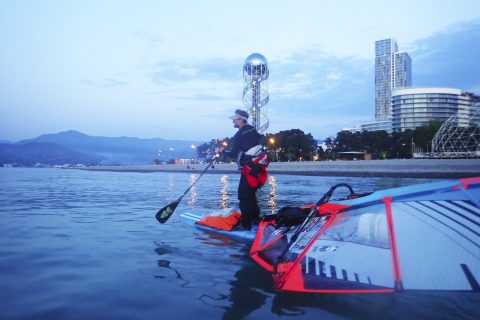 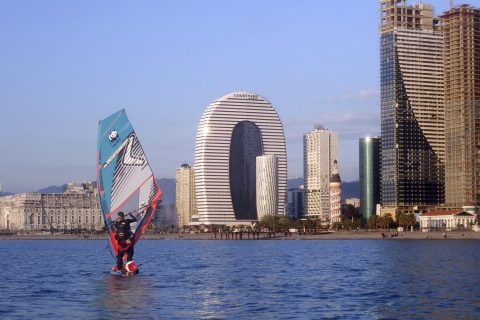 BLACK SEA
First landing is a tea stop where I get a taste for Black Sea cold water and shorebreak. Good fortune allows an escape with mast and sail intact. I push on to Sine. For the next three days the wind blows onshore and is biting cold. More waiting is psychologically uncomfortable, but the sea state would be bruising on the board, and this is now the nurse-it-home stretch.More settled weather arrives, and I link together some days. The feel of the Black Sea is more reminiscent of the Barents Sea than the Mediterranean. It is usually lonely, grey and cold. There are many seabirds: grebes, terns, divers and gulls. There are also many dolphins, rarely a day passes without seeing short-beaked common dolphins, common bottlenose dolphins, and harbour porpoises. Fishing boats are typically industrial sized. I’ve not seen any pleasure craft outside of harbours. It has also rained a lot. There are a few theories about how the Black Sea got its name. My guess would be that the simply descriptive is favourite; to the old world traders, the contrast with the colourful Aegean would have been very apparent. A sadly unmissable feature of the Black Sea and enclosed seas in general is plastic. The stuff is everywhere. In Turkey is it not helped by poor infrastructure. Household waste landfill sites are quite common. And in places the waves are eating into the sea cliffs of plastic. That said, there are still considerable differences between how effectively different towns deal with their trash. Near fishing harbours there is also very typically polystyrene from broken fish crates. Near places nice for a picnic there is trash from picnickers.

The apathy towards plastic pollution is a bit dispiriting. What hope then for the bigger issue of the climate crisis? But in Turkey, as elsewhere, I have also met educators and young people who are the start of a wave of environmental awareness that will only grow. I choose to remain hopeful, for what other option is there? We either fight for our planet or give up on the future. Better to go down fighting, finding solidarity in the cause. From recognition of the common threat, crisis can bring unity, action, and change.

CHALLENGES
The sailing and coastline has been varied and interesting. There has been the occasional day to raise the pulse, either because of waves or stronger winds. There are frequently conditions that are dangerous for small craft, and the hypothermia risk in event of prolonged immersion is real. I give the Black Sea the full respect I give all seas. But I am not the same sailor who sailed round Britain back in 2015, or who set off from Norway in 2017. I’ve seen a lot of sea now, have been scared on occasion, and am mentally toughened as a result.

“The sailing and coastline has been varied and interesting.”

PEOPLE
I look back now and laugh at myself for the trepidation experienced before sailing beyond the comforting familiarity of Europe. We pick up fear of the unknown and carry it. It conditions our attitudes and can undermine our humanity if left unchallenged. People here are the same as elsewhere, with good intention.  I enjoy reflecting upon historical migration, trade routes, discovery and conquest. We are a genetic tangle, and that’s fantastic! I have enjoyed seeing the easy coexistence of faith. How people identify or dress doesn’t seem to be a big deal for anyone else. There is no obvious segregation. The mosques issue their call to prayer five times a day just as municipal clocks might mark the passing hours in European cities.

In villages and rural settings people are unlikely to speak English. In the urban centres there are typically more educated people who may speak some English, and for these religion does not seem to be a major part of their lives. The family of the sea in Turkey has been particularly engaged. There are sailing clubs in the bigger towns and cities and all have been hugely generous with time and support. There has been lots of TV and interviews that repeat the same format. I get a little tired of those. But I do enjoy the opportunity to talk freely with children of all ages with open minds, and perhaps play a part encouraging others to explore their ambitions. The sun is out this morning, the description of a grey Black Sea no longer fits. The café where I am writing this plays jazz music and my sleeping bag is airing nicely in the gentle breeze. Time for breakfast – Kahvalti in Turkish – and a few more cups of tea. The journey continues to be a huge privilege. For the first time the Russian border, the end of the sailing part of the journey, appears close. I hope to savour every mile. 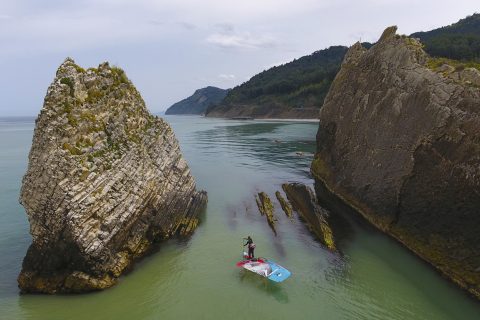 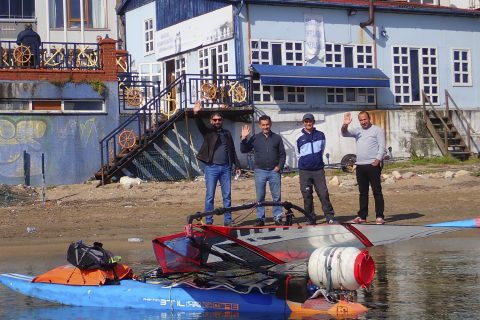 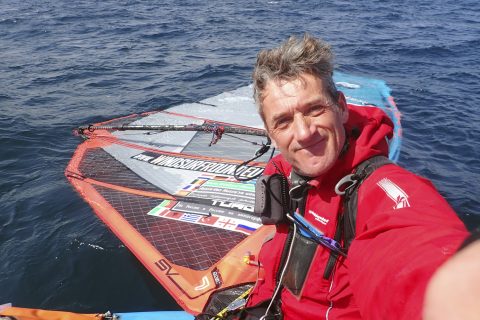 ARRIVAL GEORGIA
Winds remain light for the remainder of the Turkish Black Sea coast. Only the occasional outcrop of coastline is natural. For the rest a 3-lane dual carriageway, protected by a rock armour wall, runs parallel, separating all towns and villages from the sea. Inland are attractive hills and mountains; hazelnut country becomes tea country, and behind the mountains are snow-covered. Most days are at least part paddled as progress into light headwinds barely provides a return. Help continues to come my way either planned (often a hotel) or spontaneous (fish soup and a covered place to sleep). Every town has a harbour, so stopping is easy, even on days when there is an awkward swell, and there is nowhere else to stop.

With a few days to go until the border with Georgia I step up my attempts to attain permission to sail into Abkhazia, which has declared independence from Georgia and is self-governing. I reach out to embassies and specialist fixers. It soon becomes clear that the plan I had in mind had never been viable. Avoiding- misunderstanding at borders shared by countries and regions in conflict is paramount. There is no sea traffic from Georgia to Abkhazia or vice-versa. The situation now is calm, but the border remains a tense place after more than 12000 deaths during their still unresolved conflict. Over a few days I move to and settle on an updated plan. From Georgia I will catch a ferry to Odessa, Ukraine in order to bypass the politically complicated north-east corner of the Black Sea. Then I will sail the Black Sea coast to Romania, and then to Bulgaria, from where I will begin the cycle to the Arctic.

The final leg of the continuous windsurfed part of the journey is a border crossing from Turkey to Batumi in Georgia. It is a suitably effortful day: part-paddled and part-sailed. 10 hours hard slog with cramping muscles at the end. The mountains give way to river delta and flat land and then a modern clean city. Like every day, it is a good one. The next day I catch the ferry to Ukraine and at the time of writing I’m in Odessa sorting paperwork to enter Romania; the final sea legs off the journey await.

“The journey continues to be a huge privilege.”