A modern freerace exemplar, the Monster is a big beast in both size and personality! Comfortable carrying big sails, with all foil types and in all sea conditions, we recommend partnering it with a quality fin to really explore its true potential. 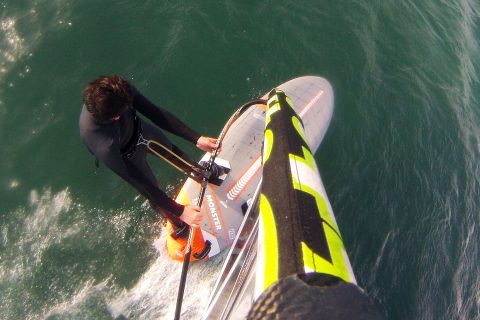 The Monster is part of Simmer’s fifth generation lineup, providing the “Freerace Firepower” to their armoury. The four sizes in the range remain unchanged for the new season (bar a graphical update), all measuring 230cm in length yet varying in width accordingly, to house their stated volumes. Said to be a step more user-friendly than the brand’s no-compromise 3XS slalom boards, the Monster range follows a convention found amongst the slalom fraternity and come supplied as standard without a fin. And like its larger sibling, this 126 has a foil ready fin box fitted, allowing it to be used with a foil, and thereby extending its useable wind range. At 82 cm it has easily the widest outline in this group, with a large, cavernous recess extending through the deck, starting from between the front straps and radiating out through much of the nose. In profile it means there’s a wealth of volume in the domed deck under the rider’s feet, whereas the wide nose is relatively thin. Produced using the brand’s most advanced technology it boasts a PVC stringer through its spine and a Biax carbon layup of varying angles over a double PVC sandwich. And by utilising the latest techniques, such as a brushed paint and Hot-Coat finish (where the colour finish is integrated into the epoxy gel coat finish), the result is a very light board … the lightest in this test group in fact! It comes complete with thick dual density deckpads, four branded Velcro straps and a bespoke plastic-moulded nose cone – a nice touch, especially if you’re considering using the Monster to progress your wind foiling. One another comment – the supplied footstrap screws and fin-bolts are fitted into place using a TX20 tool. The adoption of Torx is a definite step forward and we’re sure will become increasingly commonplace amongst all brands; just make sure you have a good quality TX20 in your toolkit for this Simmer! 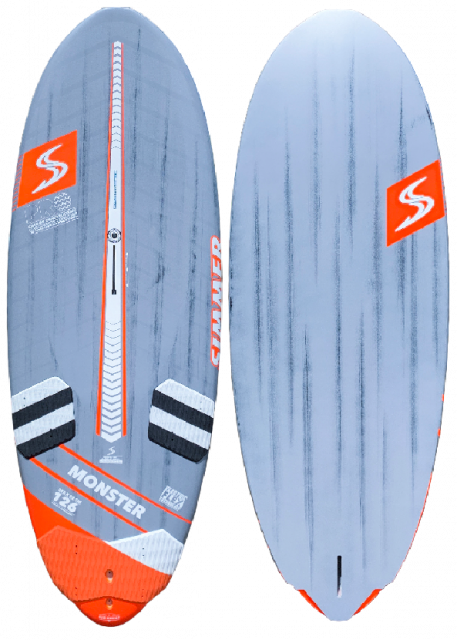 “Insane top speeds with full control at all times, even in the choppiest water you can find. The Monster gives you total confidence, sheet in and just go for it!”

Super stable and easy, the Monster has a great rig and weight carrying capacity, feeling much larger than its quoted volume at rest. Deliver power though and it is quick to release as soon as it’s pointed off the wind, the straps surprisingly easy to find as the tail is much narrower than the visual appearance of the board in front of you would have you believe. Gathering speed in an instant, the acceleration is crisp, yet the Monster feels incredibly comfortable and planted, riding high and stable on its mono-concave, the nose of the board pinned to the surface of the water thanks to the recessed mast track position in the deck. We used the Monster with a variety of fin sizes and types, and predictability it thrives on being partnered with a quality blade. It also has a wide wind range, comfortably taking sails of 8.5m (and more) and although feeling big, retained its manners well whilst used with sails down to 6.0m. A great example of how freerace boards have evolved from being simply poor relation ‘detuned’ slalom boards, the Monster is fast on all points of sail, but more importantly comfortable for long periods of use. Planted and accommodating, it invites you to plough the power in and explore its potential. In the gybe it does feel its width upon entry, yet push hard through its pulled-in tail and it responds admirably, capable of driving through a much tighter arc than initially envisaged. And the final feather in the Monster’s cap – it’s a cracking board for foiling! The 6 mm fin bolt holes do demand perseverance when fitting some foils, yet it was versatile in the foil types it could partner, from low to high aspect, the deck shape and footstrap positions providing plenty of feel and connection.

Bottom shape: Vee with double concaves in nose and shoulders, the vee pronounced in the shoulders, washing out to mono concave between the straps and flat in the tail behind the fin.

OTHER BOARDS IN THIS TEST