Top slalom sailor, Matteo Iachino, has been switching between his slalom board and speed needle recently. From our May 2021 issue he tells us more about his foray into the world of speed sailing.

In my mind speed and slalom have always been connected. I remember back in the day they ran PWA events such as Fuerteventura with the two disciplines together. I never had any spare time to try and do some speed sailing until last year, but now I’m hooked.  I’m still a rookie in the speed world, but the biggest difference I’ve found so far is how relaxed the riders are in competition, as you basically fight against yourself and focus on your own performance, while on the slalom course you fight directly against the other sailor. You kind of want to be big and heavy in speed, in a similar way to slalom. And the gear is as important as it is in slalom, maybe even more. It is all about testing, getting a good board, fin, sail and mast working together for that day in that spot at that moment. It is also a matter of luck to get a good run with good gusts from the right direction and no waves or chop in your way. 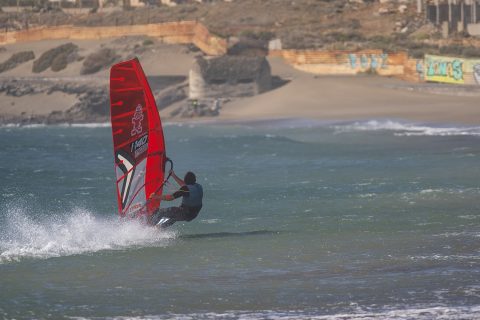 The need for speed

My main goal is to go as fast as possible every session I get on my speed board. It is really challenging sometimes to find the right gust and keeps you in the water for hours before you finally get the speed you want.

I don’t have any secret weapon at the moment. I’m still experimenting as much as possible because as I said before, I’m a complete rookie in the speed scene. I think I have really good gear, a good stance and plenty of control coming from my slalom background, that helps for sure.

My best speed experience so far has been the Prince of Speed, World Speed Tour event in the South of France last year where I came second. My worst speed experience was a stupid crash I had accelerating on the approach to a speed run. I crashed sideways and the weight in my weight jacket moved sideways damaging my left ribs and leaving me in pain for a month afterwards. 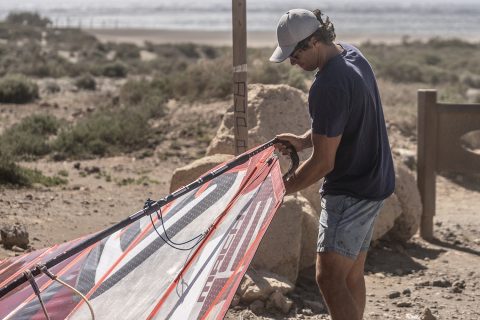 I don’t have a spot where I train for speed yet. I think it will be here in Tenerife at La Tejita, as it is only 5 minutes from where I live in the winter time in El Médano, so I can easily go there sailing every strong wind day. 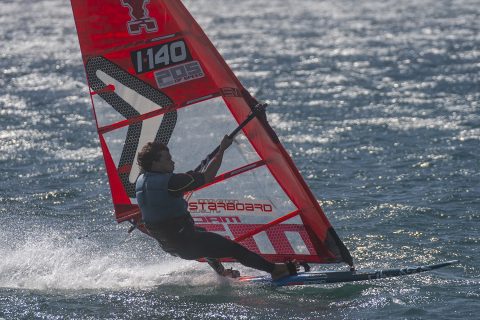 If I would have to suggest anything to a weekend sailor about speed sailing then I would tell them to hold on when they hit a gust, even though it feels as if you are about to catapult. That is the feeling you want to get to accelerate. If you manage to hold on and just shoot downwind in that moment instead of catapulting you will get a sick speed run.

I think stance and setup are really subjective for speed. I’m a slalom sailor and I like long harness lines, a more sitting down and legs wide apart position to feel in full control of my board.

I don’t think the windsurf speed record will be broken by a foil. I think foiling will bring us to new speeds in medium to light winds, but the fin is way ahead for now, especially in control and you have to have control for 500 metres, not for 2 seconds.

Lüderitz is definitely something I see in my future. I just want to go there with a chance to break the record. I just need more gear knowledge and some sponsors to support me for such a project.

I think Antoine Albeau has done great things in speed sailing, as he has done in many other disciplines. The wind tunnel he used might be mostly a commercial thing, but for sure he will have took some knowledge out of it. 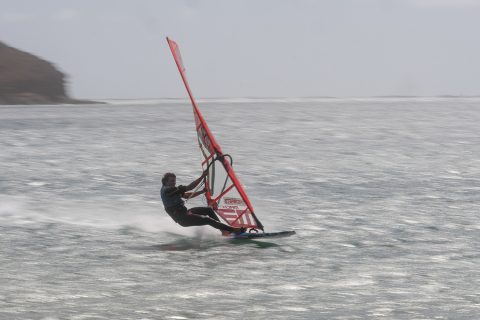 Speed run from Matteo in Tenerife

I did wear a weight jacket with 10 kg for the speed event, but when I go free sailing I don’t put anything on.

Where would I choose, an island with good waves or an island with dead flat water for speed sailing? That is a hard question, but I think I would go for the wave one. I love wave sailing and riding waves, so if you were to make me chose between waves and flat water, I would chose waves. Racing and speed is great, but to free sail I’ll always choose waves.

I look at Antoine, Bjorn and all the Dutch guys in the speed world for inspiration. They have a lot of knowledge and experience to draw on having been speed sailing for so long. I grew up with the myth of Bjorn and I had the pleasure to compete with him for a few years before he stopped. All the PWA riders from the 2000s were my inspiration also, so I can’t really come up with just one name from that important era. I’m just happy to be doing what they were – living the dream and doing what I love. 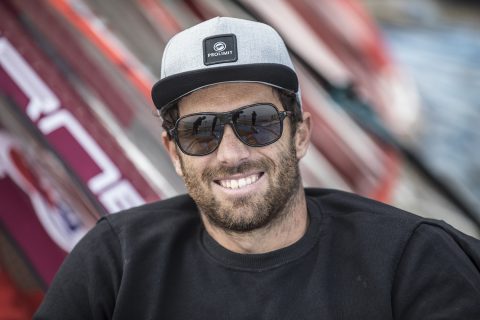 My dream speed spot would be Lüderitz on a 5.2 Severne speed sail lit up. I think there isn’t a better place in the world at the moment for speed sailing.

To me slalom is still the hardest discipline. Speed is hard too, but it is less nerve wracking, it is a lot about how many runs you do and if you have that lucky one with a strong gust from the perfect direction. The iQFoil discipline is really technical, but the important iQFoil competitions are in lakes with flat water most of the time. They are a one event competition and the last day decides a lot, so it is a lot about luck because although you may have won in the days before, you can get an unlucky finish on the last day and what you did before doesn’t count. You can enter the last day in 11th or 12th position, never having really fought with the top riders for the whole week and by getting a lucky break you might end up on the podium. So obviously it is really hard racing, but not close to a PWA world tour event in terms of pressure of competing for the podium every day.

In PWA slalom you also compete with a fin or a foil, race in flat water, chop, breaking waves, warm and cold weather and you have to perform and be ready in all of this to be able to win the world tour. I feel therefore it is another level up of competition. It is like comparing Formula One with all its events to a single race like Le Mans.