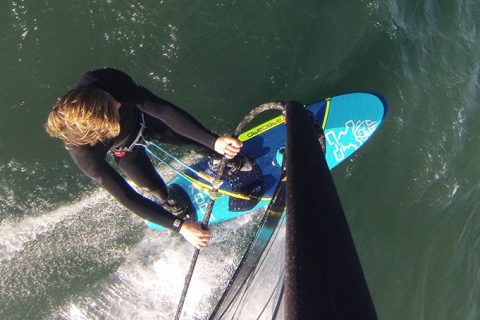 VERDICT
Maintaining the Starboard Kode’s reputation as a true all-rounder, the 95 has masses of user appeal, from coastal blaster to the heavier rider’s wave weapon. Compact, lively and adaptable, it is a very good-natured board to get on with. 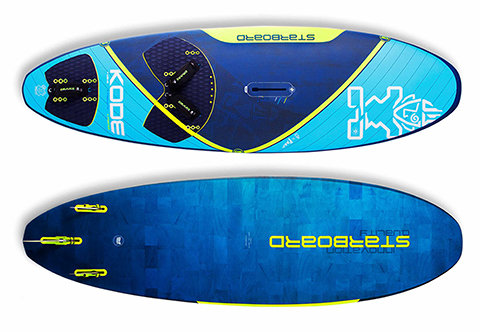 THE LOWDOWN
The Kode 85 was tested in the wave board category last month and we were taken aback by its capabilities in a wave environment. It could transform a day of coastal slop into an exciting playground and make cross-onshore waves a choice day with its early release, ease and practicality. So we had high hopes for the 95 as well! Short and wide, it has a stubby outline, with its squared off nose and squashed diamond tail. The deck is flat in the nose and around the mast track yet heavily domed in the rear, accented even more so with the thick dual density deckpads. On the underside, the 95 parades a wealth of pronounced vee and double concave, giving it something of a spine along its centreline, said to better its rail-to-rail response and blasting control in challenging seas. Produced exclusively in the brand’s eco-conscious construction Flax-Balsa, which uses natural end-grain balsa, the board is lightweight and comes with four natural rubber Yulex straps and two G10 fin setups, giving extra value for money. And as with its smaller sibling, the 95 has colour coded guides on its mast track and fin boxes, to help tune the board according to the conditions and manner in which it is being sailed. With a definite tow-in to its star box side fins it would be interesting to see if this larger sibling could still mix it in the wave arena as competently as the 85.

BRAND CLAIM
“The brief for the new Kodes was to deliver the best onshore wave board yet excel in freeride, freewave and freestyle as the Kode legacy demands. To achieve these objectives, the Kode shape was shortened in both nose and tail for added manoeuvrability, while avoiding any loss in acceleration or speed. The increased bottom vee shape further adds manoeuvrability in the waves, giving a sharper acceleration in the gusts and more smoothness in rough waters.”

PERFORMANCE
Set for use in flat-water blasting mode initially, the Kode feels compact and easy underfoot, accelerating quickly once pushed off the wind. It instantly feels lively and alert, the 28 cm fin supplied providing ample drive to push against, whilst the deckpads offer a ridge to lock the back heel against, with the outboard straps encouraging the rider into a committed stance. Load it with power and the Kode becomes a real gem for coastal blasting, feeling balanced and affable at all times, whilst spurring the rider on to trust it as they dance their way out through the breakers. Hit a ramp and it projects freely into the air, feeling smaller than its quoted volume and snug as the rider compresses for more height. It has a versatile nature; sail it at half speed and it won’t protest, but you get a real sense that there is more under the bonnet to explore. Moving the straps inboard and changing the fins to the thrusters supplied alters the feel and response of the Kode, whilst still retaining its easy forgiving mannerisms. There is plenty of volume under the back foot for a bit of pop and freestyle trickery if that’s your bag (taking the thruster fins out for good measure), although you may be well served to add a dedicated freestyle fin for good measure. On the wave the Kode keeps its speed through the turn well, using a mix of rail and back foot pressure through the fins to vary the carving angle. In marginal cross-shore or cross-on conditions, it was a lot of fun and glided serenely from rail to rail. As the conditions increase, it did begin to feel quite big underfoot, the width and dome in the tail dictating the story as you begin to feel the ride is more forced than fluid. Nevertheless it keeps its speed and will undoubtedly find favour with heavier riders, who can maintain their dominance through the turn.

« THE 1987 SURF FUNBOARD CUP FROM CORNWALL PRESENTED BY PETER HART!
LEARN HOW TO DO A STALLED FORWARD LOOP IN FOUR STEPS: BY RICARDO CAMPELLO »