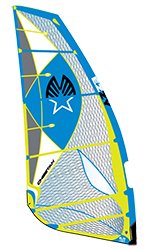 OVERVIEW
The Cheetah has had a facelift for 2018, with some changes in the panel layout and now available in two bright colourways (red or blue) for the new season. Reported as being able to “hold its own against any race sail”, it is compatible with RDM or SDM masts, being tested here on the brand’s familiar Ho’okipa RDM option. With the thinnest slither of Dacron in the luff panel, the rest of the sail employs Dyneema reinforced x-ply and ripstop scrim-X in its panels, with the signature PVC central window and a Weft-Stop anti-rip cloth for the luff sleeve. The leech trimming dots are located on a lower panel for 2018, the ambiguity in their looseness overruled by the certainty of the brand’s now established calibrated tuning system in the foot of the sail. Combined with the outhaul tuning strings in the clew, the Cheetah has its usual enormous tuning range, particularly on the outhaul. Apply the downhaul tension and the battens pull away from the mast to such an extent that none of them retain any contact. The profile is deep as anticipated, the shape positioned well forward in the draft as the Cheetah exhibits one of the least pronounced luff curves here. From the materials used in the Cheetah, to its finishing touches and fittings (such as the durable plastic head cap), it is undoubtedly built for years and years of service.

BRAND CLAIM
“Our go-to flat water sail, the Cheetah has a soft, locked-in race feel. Camless and easy to rig, the Cheetah’s deep foil provides power and speed. When we freeride, we want to go fast, nail 100% of our gybes, and rocket into the air if a ramp appears. This is the easy freedom that inspired the Cheetah, and what the Cheetah delivers.”

PERFORMANCE
Using the Cheetah in marginal winds, it provides plenty of useable feedback through both hands, the deep profile filling further as the pressure builds and the slack in the luff sleeve is taken up. There is a wealth of tuning range on the outhaul, outlined by the tuning threads in the clew; just be conscious on the profile of the boom you’re using as modern monocoque booms are narrower between their arms, potentially restricting the depth of the Ezzy’s profile as it expands. The more proactive rider will also discover the Cheetah’s pumping ability, its reduced luff curve allowing you to really feel the connection and spring the mast with effective pumps. A great proponent for making the most of marginal conditions, as the winds increased, the Cheetah’s settings can be refined to extend its range to extraordinary lengths. This is done largely on the outhaul, but the downhaul can also be played to improve the sail’s release through the air. We downhauled the sail beyond the maximum prescribed in the tack’s calibrated guide, opting to pay more attention to the one in the head of the sail. The leech loosens up, promoting more twist in the trailing edge and making the Cheetah feel more potent in the hands as gusts hit. The centre of effort is locked well forward, the pull coming from a relatively high position, yet always soft and manageable, allowing the rider to rock back into a purposeful blasting stance. It is fast on all points of sail, perhaps not as loose or slippery as some others on test here, and yet the soft dependable power delivery and constant feedback through the hands enables the Ezzy be fast on all points of sail and be comfortable over long periods of use. In transition, it rotates smoothly around the mast, the power returning progressively, giving the rider time to settle.

THE VERDICT
With the build quality to provide years of service, the Cheetah is a delight to use over a simply staggering range, its fine-tuning enabling you to alter the style of the feedback provided more than ever before.