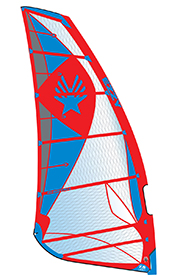 OVERVIEW
The Cheetah has had a visual makeover for the new season, available with new blue-red or blue-yellow colourways in an otherwise unchanged design. The brand is keen to point out the heritage behind the sail, referencing David Ezzy’s 35 years of experience in designing sails. And as with every sail that bears the Ezzy logo, it is built to last, with Spectra-X reinforced x-ply used extensively, a ripstop scrim-X in the coloured panels, and a Weft-Stop anti-rip cloth in the luff sleeve. All seams are glued and covered before being sewn, and there’s a PVC window incorporated to provide resistance in impacts and extra softness in feel. Candidly, the literature supplied goes on to state that David believes a sail should last “forever”, and we have to say this sentiment is abundantly apparent in the sail’s detailing! Rigged on a 460 cm Ho’okipa mast, the Cheetah’s calibrated rigging guides provide a foolproof reference for achieving the correct set, the sail effortless to downhaul thanks to its minimal luff curve. There’s a mass of pre-shape present, seemingly all the way up the sail’s leading edge, the lower battens either just touching the mast or fully pulled away, depending on set. With six battens to its structure in this size, and the top batten fixed right at the top of the sail, the distance between each batten is noticeably more on the Cheetah than in some of its peers. Yet how would this translate on the water?

BRAND CLAIM
“The Cheetah is a fast, easy freeride experience that starts when you unroll the sail.”

PERFORMANCE
Rigged on its minimum setting for marginal conditions, the Cheetah has plenty of shape and depth to its profile, which, complimented by the movement in the luff sleeve, allows the sail to generate a massive amount of bottom end grunt. It is a real diesel engine, generating the torque and pull through both hands to force even the most sticky platform onto the plane. You can stand there passively and let the sail do the work, yet if you’re keen to put some effort in, the Ezzy also responds sublimely to pumping, the spacing between the mid-battens and flex in the mast granting the sail with a real snap to its response. It is a very easy sail to get on with in a freeride capacity, comfortable for long periods of use and feeling very balanced between the hands. Its light-wind potency and high/forward focussed pull-position make the Cheetah a real go-to sail for foiling too, its tight connected mid-leech suiting the head-on apparent wind direction experienced when in flight. Minor changes in wind strength can easily be absorbed or countered by a tweak of the vast outhaul set available, reserving a more considerable adjustment on the downhaul for significant fluctuations. It has to be said, the wind range covered by the Cheetah is quite exceptional, its tuning capacity always giving the confidence that comfort can be restored whatever the conditions throw at you. In manoeuvres the Ezzy provides the power and dependability to enter the corners in confidence. With such a deep profile, it will never go neutral mid-transition and takes some input from the rider to command it, particularly in strong winds. Yet this, for many, is a small price to pay for the upside in wind range and stability that the pre-shape imparts. Naturally fast and comfortable on every point of sail, in a drag race the Cheetah doesn’t have the extra gear of some of its more top-end-dedicated rivals, confirming our belief that it should be considered more as an all-round fast freeride contender, rather than freerace.

THE VERDICT
Offering dependable power over a simply massive tuneable range, the Cheetah is an easy sail to get on with, defining the essence of an engine designed around the freeride discipline.