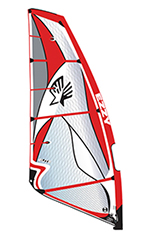 OVERVIEW
The Elite is Ezzy’s four-batten offering, sitting in between the Taka and Zeta in the brand’s line-up. Described as their ‘go-to’ sail for every environment and role, from flat-water fun to bump-and-jump; onshore mush to cross-off wave-riding heaven … there is certainly a lot expected of the Elite. Revised significantly for 2017, it has become more compact, with a new luff panel and construction process, said to make it feel lighter and earlier to plane. Other design concepts from its predecessor remain to ensure continuity, such as the extended distance between battens three and four (intended to boost handling lightness) and the three large mini-battens spaced evenly down the leech. Looking at the size range, there are two new smaller sizes available, dispensing of the two larger sizes (6.4m and 6.8m) of the old Elite. Build and material quality are exceptional as always, with every minute detail of the sail so obviously scrutinised and rationalised by founder David Ezzy. Produced in three bright colour-ways it is, in our opinion, much more eye catching than its forerunner, whilst remaining distinctly an Ezzy with its tall, upright outline.

BRAND CLAIM
“The Elite has gone through some fundamental improvements. The new sail inspires us to sail better and to rig up quicker to get more time on the water. The new luff panel makes the Elite more manoeuvrable without sacrificing overall performance. The biggest change though, is perhaps the new construction process, with makes the Elite feel lighter, allowing it to plane more quickly.”

PERFORMANCE
Using the 400cm Ho’okipa mast supplied, it is effortless to sheath it up the Elite’s luff sleeve since it easily has the least luff curve of all the sails in the group. The downhaul tension is similarly straightforward to apply, Ezzy’s calibrated downhaul system in the tack of the sail providing clear, unambiguous guidance. Setting with the brand’s trademark deep profile, the Elite has several minimum marks (akin to the Taka) to make the most of marginal ‘float and ride’ conditions, extolling the extra range the new sail design has. In marginal winds it certainly generates an impressive amount of drive for its size. Despite feeling small and balanced, there is focussed feedback through both hands as the gust hits the sail, which combined with the extra pumping response (thanks to the reduced luff curve), can get the board planing in no time. There is a real sense of connection with the sail – far from feeling powerful but a little spongy / dead in the hands (the criticism levelled at Ezzy sails in years past), the new Elite feels both active and responsive. It doesn’t go neutral mid-transition as some others in the group do, yet the power is so balanced and manageable, and the sail’s stability unwavering that it retains its manners at any sheeting angle. This instils confidence and allows the rider to use the constant drive available to their advantage. In severe winds a few centimetres of downhaul and significant outhaul helps to settle the sail, its centre of effort remaining steadfastly forward in the draft, whilst the softness to the power delivery helps to temper any harsh impact.

THE VERDICT
With its improved bottom end potential and extra response in the hands, the Elite’s performance range has been pushed on yet again, justly reinforcing the already renowned notoriety of the Ezzy wave sail.