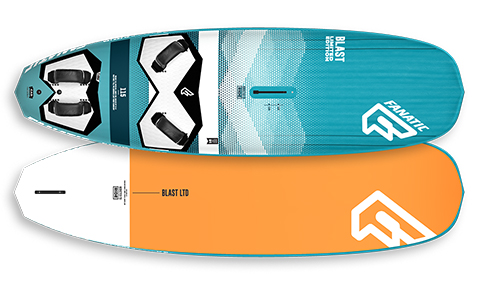 THE LOWDOWN
Described by Fanatic as their ‘performance freeride’ range, the Blast leapt into the limelight last year with its distinguished short boxy outline and parallel rails. We tried the 130 in last year’s freerace category and were impressed with the ease and accessibility of its straight-line performance … before it stole the show in the gybe! Available in four sizes for 2018 (with the addition of a 145) and two construction options, this LTD is the more likely option for most, weighing in as one of the lightest on test and competitively priced compared to others. At 66cm, its design is significantly narrower than a ‘conventional’ freeride of this size. Its rails are chunky throughout their length, and super sharp from the diamond tail to the front strap, before exhibiting a good amount of tuck. Flat in profile and with a steady dome throughout its deck, it comes supplied with the brand’s easily adjustable Premium straps, grippy deckpads and a composite fin shaped by Choco Fins. Interestingly, the fin box used throughout the Blast series is now Tuttle for 2018, enabling the use of more performance oriented fins … or a foil in the case of the two larger Blast sizes.

BRAND CLAIM
“Drawing inspiration from last season´s most successful models – the Stubby and lightning fast Falcon – the Blast does exactly what it says on the tin. A hot new addition to the lineup, it represents everything that got us hooked on windsurfing in the first place. Get ready to have a Blast!”

PERFORMANCE
Despite easily having the narrowest width in the group, the Blast 115 can carry similar sails to that of its peers, the width in the shoulders and tail helping to keep the board balanced and stable whilst off the plane. Provide power and it responds willingly, rising up out of the water and accelerating smoothly. The straps are easy to locate, the fin providing plenty of feedback through the back foot. It feels conventional underfoot in every way … only challenged by its visual appearance as you look down. Compact and responsive, it charges over the water very cleanly without demanding too much of the rider. And as with its larger sibling tested last year, gybing is certainly on the menu with the 115. It is simply sensational round the corners, relaying the feel and response you’d expect from a much smaller board. It inspires you to push harder in the next turn to see if you could get the arc tighter and catapult you out of the turn faster. The inclusion of a Tuttle box is also a great addition for 2018, enabling the more serious pilot to experiment with more specialist fins. We briefly paired it with a precision carbon blade and the results were impressive. The one point we would make is that the more we tried to really lock and drive the Blast (like a straight line slalom specialist), the less effective the energy translation into acceleration felt. If you try to force the issue and push hard, it seems to rock slightly on its vee, onto its leeward rail. Instead, we found it almost more potent if you just relax and let the board do the work – chill-out, maintain your stance and the board will fly and accelerate on every gust. Fast, lively and fun on every point of sail, the Blast proves the ‘compact’ or ‘stubby’ concept has legs well beyond the wave arena and real longevity in its application to boot.

THE VERDICT
The Blast has the ability to keep up with its fastest contenders in this group, yet combines it with a gybing prowess that is well beyond the realm of possibilities for a 115L board … or so we thought.