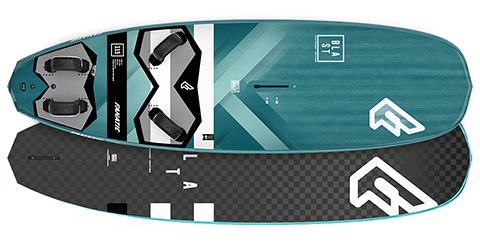 THE LOWDOWN
The Blast 115 was tested last year in this category and remains unchanged for 2019 (bar a graphic update), along with its three siblings. Supplied with a Tuttle box fin, yet hosting a Deep Tuttle box, the 115 does potentially lend itself for use with a foil … albeit the two larger sizes in the range are actively promoted as ‘foil ready’. Its shape remains distinct amongst the group – significantly narrower than convention, with a boxy nose (complete with a raised centre-point, somewhat resembling a nipple or teat!), parallel rails and angular diamond tail outline. The hull shape is clean and uncomplicated, made all the more evident with the omission of any cut-out complexity in the tail. Produced in either the brand’s indulgent Textreme construction, or this Limited biax fibre / full PVC sandwich (which is £100 dearer for 2019, yet still very competitively priced comparing like for like), it comes supplied with four of the brand’s Premium Velcro straps, along with a Choco fin. Last year we summed the 115 up by stating it has, “the ability to keep up with its fastest contenders in this group, yet combines it with a gybing prowess that is well beyond the realm of possibilities for a 115L board … or so we thought.” Would its performance and gybing capacity still stand out amongst its latest rivals?

BRAND CLAIM
“Inspired by the parallel rail concepts of the Stubby and FreeWave STB models, the Blast takes the trend one step further and lands a solid punch on the traditional freeride market.”

PERFORMANCE
In answer to the earlier question, the simple summary is a resounding, “Yes!” The Blast remains the forerunner for easy attainable performance, requiring little to no technical input from the rider. Provide power and it releases calmly and passively, the flat deck enabling the board’s trim to be maintained more intuitively as the rider progresses rearwards. The straps themselves are then effortless to locate, as the narrower outline and tapered tail focuses the rider’s stance closer to the centreline. With its large fin and smooth release, we wouldn’t argue with the stated sail size being as large as 8.4m – impressive for a board that actually feels so small and responsive underfoot. This is also noticeable in the tack, the Blast’s wide nose and shoulders providing ample stability mid-transition, when others of this length would be all too willing to submarine. As the wind builds and the conditions turn on, the Blast’s manner remains rock-steady. It thrives in these conditions, when others in the group were beginning to feel their size, flattering the more nervous rider, yet providing enough response to excite the experienced. Whatever their style, a quick charge out on the Blast can’t help but inspire a rider to push further. And that leads us to the only caveat we would add – rather than push, just let the board’s form and efficiency work for you. Even with a quality slalom fin in, if you force the issue, the board’s compact geometry allows it to rock gently on its vee, losing some efficiency. Instead – relax, go with the flow and the performance comes easy. It just feels so comfortable and balanced; perhaps not as flighty or as crisp as some here, but the connection and control you always feel is a real bonus when the conditions become challenging. That leaves the gybe – the Blast’s true ‘magnum opus’. However you enter the gybe, be it tentatively or aggressively, the 115 simply complies … and in such an assured manner that you pretty much always come out with speed. We actually found ourselves trying to gybe poorly to see if we could make it falter! The tapered tail and thin rails mean you can rely on the Blast to mask over any wrong, or heavy footwork, and still come out smelling of roses.

THE VERDICT
Whilst its ease, straight-line performance and comfort are certainly praiseworthy, the Blast truly remains the one to beat around the corners, with a quality of glide, grip and
versatility that is simply infectious.