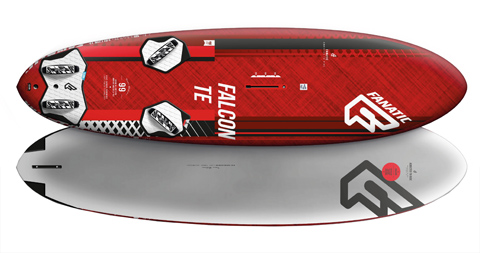 THE LOW-DOWN
One of a seven-board Falcon line-up, the 112 is a new design for 2016, as is its two immediate larger siblings and the 99, whilst the rest of the range remains unchanged. Shorter and fractionally wider than its predecessor, the Falcon 112 is available in TE construction as tested here (made of Full Biax Carbon Sandwich Light Finish technology), or Biax Glass Sandwich (BGS) Light Finish, coming complete with a CNC milled G10 Choco fin and additional inset footstrap options for a more comfortable relaxed ride. It has a short, rounded outline compared to the others in the group, wide and thin in the nose, with recessed scoop to the deck around the track, leading to a flat section between the straps and a relatively narrow pointed tail. The tail itself packs in quite a bit of volume and boasts a new complex cutout design said to increase control without compromising top end speed. Exceedingly light, it comes with Fanatic’s easily adjustable Velcro straps and high traction deck pads, which are wafer thin in all but the middle area between the back straps, where there is a raised section under the toes.

BRAND CLAIM
With special focus on the mid – larger size models, we’ve improved the acceleration, top speeds and control. In addition to this, we’ve enhanced the overall ease of use and response when gybing. During an intense R&D process lasting several months, countless prototypes, meticulous testing and analysis, we reached our goal of a lower ride through step by step adjustments of mast and fin positions. Combined with a overall wider outlineand a wider measurement of two foot off the tail, the early planing
and acceleration is truly unbelievable”

PERFORMANCE
On the water the Falcon was liked by all who tried it. Early to plane and lightning quick to accelerate, it provides a loose and energetic ride, with a real cutting edge quality to its character. It seems to have a naturally very efficient stance, riding high out of the water yet flat to its surface, with the nose pinned down. It is also the most responsive to foot steering here, providing smooth return and enabling the rider to change course easily to pick their way through challenging seas. We tried the Falcon with several fins, from 37-40cm and with its fin box placed the furthest back of all the boards in the group, it was certainly sensitive to fin tuning.
Get it right though and the Falcon really flies on its fin, the board’s balance and posture allowing you to keep it at its sweet spot easily for long periods, feeling comfortable and effortless rather than demanding or exhausting. In the gybe the Falcon’s responsive style comes back into play, biting into the turn like a loose freerace board rather than a hard-lined slalom machine, providing grip and feedback throughout and exiting with speed more often than not. There is a crispness and clarity to the Falcon’s feedback, allowing the rider to really sense the board’s thresholds and ride it right up to its limit.

THE VERDICT
The Falcon 112 provides a high-octane ride with a beautifully responsive and crisp nature, making it a true weapon around a slalom course, particularly around the corners.