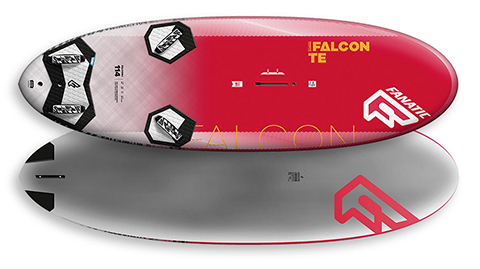 THE LOW-DOWN
The 114 is one of three new designs in the Falcon Slalom TE line-up for 2017, guided by the ‘race-winning features’ of the boards either side of it in the range – the 99, 121 and 129. With many similar design attributes as the other slalom boards on test here, there’s a somewhat clean refinement to the Fanatic design. Firstly the outline is smooth and balanced, with parallel rails sandwiched between a rounded nose and rounded pintail in the rear. The cutouts are significant as you’d expect … and yet unlike the complex rear-ends of rivals, the step down in the Fanatic only goes to one tier and doesn’t interrupt the smooth rounded outline of the tail at any stage. They are also nowhere near the size of some other cutouts on display here. With a sunken deck around the mast track and an “ergonomic rail design” the Fanatic is built with comfort and control in mind, to extend its competitive edge when the conditions become challenging. Produced in biax carbon sandwich for the best weight to stiffness ratio, it comes supplied with the brand’s excellent Premium straps. The deckpads are thinner than those used throughout the rest of Fanatic’s range, yet nonetheless provide good adhesion to the board, and include an additional wedge of EVA in the centre of the back deckpad, raising the rider’s toes and increasing comfort for long periods of use.

BRAND CLAIM
“Last season we claimed that you’d dominate the competition with ease on our Falcons, and we weren’t wrong as the results of our team riders speak for themselves. The Fanatic Falcons won 4 out of 6 PWA Slalom events, the PWA Constructor’s Ranking, the prestigious Defi Wind in Gruissan and multiple National titles. If you want to win, ride the board of champions.”

PERFORMANCE
As soon as power is transferred to the Falcon, it engages and is eager to get going. Certainly one of the earliest planing here, it nevertheless feels quite conventional underfoot, the footstraps easy to reach and stance underfoot familiar and comfortable. Loose and responsive, it accelerates smoothly and actively, sitting high on the water’s surface. To this end, the Falcon’s stance is best described as flighty, riding efficiently on its fin and hovering clear of any harsh chop. It is certainly worth spending some time experimenting with the deckplate position in relation to the fin used to really get the balance right, but some investment here and the Falcon can be backed confidently to deliver around a course. As the conditions turn on, the settings can be refined to compensate, and retain control on this freely airborn stance. In fact, with the extra power delivered through the sail and into the lowered deckplate position, the Falcon even seemed to settle and pin itself to the floor more. It is undoubtedly a slalom board that can be used to devastating affect around a course … yet the best thing about it is that its willingness to retain control makes the Falcon more than accessible for the recreational blaster. It rewards good technique easily, is uncomplicated to use and is engaging enough to captivate even the most demanding rider. In the gybe the Falcon carries its speed through the turn when driven in confidently, returning with power and bite the more input the rider puts in.

THE VERDICT
The Falcon has royal blood when it comes to slalom credentials and this 114 is no exception. Highly spirited in ride and feel, its built-in comfort nevertheless makes it very accessible to the recreational blaster, rewarding good technique every time.