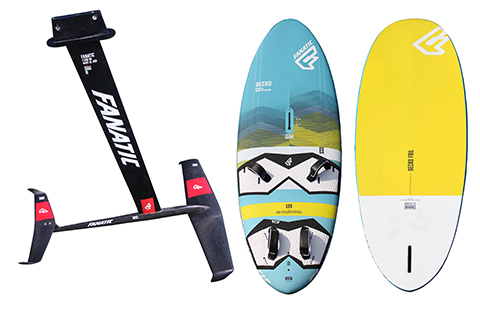 THEY SAY
Our Flow H9 foil has great performance, superb durability and is incredibly good value for money. Anyone interested in getting into windsurf foiling will find the H9 easy and fun to ride.
Enter a new world of riding sensations with our Gecko Foil. Switching effortlessly between a Freeride Windsurfer and a Foil board, it offers everything you need to just have fun! The Gecko Foil offers just enough area and lift in the nose to always stay above the surface in the early stages of foiling.

WE SAY
The Fanatic Flow H9 foil is supplied in a neatly compartmentalized, padded bag and was straightforward to put together. Used in both the Gecko and Falcon, it has an impressive low-speed lift threshold and provides plenty of early flight, the ascent feeling balanced between both feet. Whilst directionally very stable, cutting a straight path through the water, the H9 does take a little getting used to, its flight somewhat unpredictable. Trying it in varying conditions and wind strengths, we have to attribute this sensation to a degree of inherent flex, be it in the mast, fuselage, tail wing, junctions … or a combination of them all. It is not a fan of being loaded and driven hard, or cantered to windward, seeming to flex and spring back in protest. Instead, it prefers a more upright and relaxed riding style, responding positively to rider input for height control, and gathering pace easily. Its active response is also evident in transition, changing course easily and entering with speed. Maintaining flight through the first part of the turn is simple, the H9 reacting to changes in pressure fore and aft … yet that is where the journey becomes more complicated. Mid-transition, the Fanatic foil exhibits the same distinct flex twitch, making the act of achieving the right balance during the foot change much more critical. Overall, the H9 is a well-presented first foil tutor at a competitive price, providing easy lift for first flight success, most suited for light-wind to comfortably powered freeride reaching.
The Gecko Foil 133 is a good match for the H9, its flat deck and various footstrap placement options allowing for plenty of adjustment to achieve a balanced stance. It wasn’t too wide in the tail either, thereby encouraging the upright stance and reducing the amount of leverage that could be applied to the foil’s mast. At 246cm in length, the Gecko also had the buoyancy and waterline to recover from any breach of the foil whilst progressing through first flights. We also had the chance to try the Falcon Lightwind, which is foil ready also. It is a stunning performer when used with the 50cm fin supplied in marginal winds, getting going at the slightest whiff of enough power. With more width in the tail it almost overpowers the H9 at times, forcing the unpredictability issues to become more prevalent. Partner the Falcon with a stiffer more performance-oriented foil though and its true potential is realised – having just the right amount of width in the tail, combined with plenty of strap placement options, it’s a fantastic platform with which to foil on comfortably for hours.