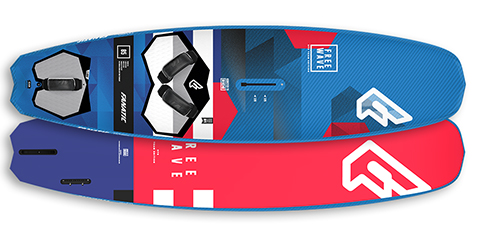 THE LOWDOWN
The Freewave STB is in its third year of production, first introduced alongside Fanatic’s reputed classic FreeWave before replacing it as Fanatic’s go-to crossover option last year. A natural evolution from the brand’s Stubby wave board series, the STB possesses many of the original concept’s hallmarks – a short compact outline with width in the tail and parallel rails, said to provide early planing, ease and stability in the ride, not to mention improved speed and upwind ability. The fittings are then moved further back so that the rider’s stance is placed right over the fins, for rapid response and “snappy turning on the wave.” Available in four sizes in the two dearer constructions, from 85 to 115L, the largest sibling is not produced in the standard biax fibre / full PVC sandwich construction. The 105 is tested here in Team Edition Innegra carbon technology and comes supplied with the brand’s Premium straps, thick dual density pads and a set of MFC thruster fins, the side fins fixing into long 13 cm slot boxes for extra tuning potential. The outline of the STB may look unorthodox … heretical even … to the smooth flowing lines of traditional board shaping, but when the previous incarnations of the FreeWave had such a strong following, the decision to replace it was obviously not taken lightly or impulsively. Being blunt, the performance benefits must have been worth risking market acceptance for…

BRAND CLAIM
“Meet the game changer. The FreeWave STB has the classic shapes beat in every way with its innovative design unleashing incredible levels of versatility.”

PERFORMANCE
When we tested the STB 105 a couple of years ago, we concluded it was “unique in feel”, best suited “for those that like a new challenging back foot biased style of manoeuvre-riding”. Well, our opinion hasn’t changed in the STB’s riding style, but as with anything ground breaking or revolutionary, it takes a bit of time for the market to catch up! Looking back through our notes as well, it seems that the fin boxes have been moved forward slightly in the board, whilst now coming supplied with a slightly larger central fin. So subtle changes, but they have certainly made a difference. The 105 can now be partnered with a larger, more upright fin and outboard straps, for a confident blasting performance. It won’t necessarily win any races, yet it no longer spins out at will, providing a cushioned easy ride over confused seas and requiring little involvement from the rider. Set the STB up with inboard straps and the supplied fins, and it loses none of its user-friendliness, yet can’t help but inspire the rider to try some manoeuvres. It planes incredibly early, has an effortless controlled cruising speed, and feels poised and ready at all times. It pops up over incoming ramps, feels smaller than its quoted volume in the air and even encourages you to try the odd aerial trick or freestyle move. On the face of small waves the 105 was a real delight, providing plenty of grip and comfort through the tail to carve tight and charge through the turn. More than this, its wide tail offers real margin for error, with a low planing threshold and a willingness to retain its speed. In challenging cross-onshore conditions, you can hold a switch-stance clew-first position for what seems like forever, the board’s compact nature allowing it to fit into the smallest pocket, before the volume in the nose helps to redirect off the broken water. It didn’t particularly like it if we were too aggressive through the front foot, and the shoulders caught on occasion in steep sections, but the balance of the STB is much better than we recall, instead delivering masses of fun and versatility whatever the conditions.

THE VERDICT
Whether it’s a sign of the times or the difference the subtle refinements have made, the 2019 FreeWave STB has come of age. Easy, accessible and incredibly adaptable over a wide wind range, the more time we spent on the 105, the harder we found giving it back.