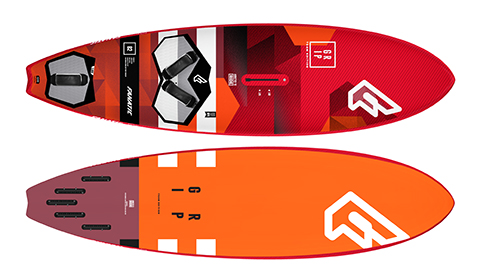 THE LOWDOWN
The Grip TE enters its second year in the Fanatic range, with no change other than a subtle graphic update. Whilst the 89 is the second largest in the five board series, the offering has been extended to include a Grip XS for 2019 – a 60L slipper for the strongest winds, or smaller rider. The XS is produced in biax fibre / full PVC sandwich to improve impact absorption, whilst the rest of the Grips defer to the tried and tested biax Innegra carbon construction, with an “exclusive high-end fibre finish” in all TE models. Supplied as a quad with light Resin Transfer Moulded (RTM) Choco fins, the five slot boxes in the tail provide the Grip with the versatility to match all rider styles and conditions. Said to be exact replicas of Victor’s boards, they can handle anything that is thrown at them, yet retain the “comfort and support for the less experienced”. The shape of the 89 is harmonious and easy on the eye, the familiar thin swallow tail and rounded even outline finishing in a raised pointed nose. There’s a combination of vee with double concave through the underside and a hard release edge along much of the board’s rail length, tempered by a significant amount of tuck that starts early on from the tail. Fittings are up to Fanatic’s usual high standards, with Premium straps, 10mm dual density pads and the slotboxes themselves are some of the longest on the market to provide that extra bit of tuning versatility, with markings along the sides to ensure setup symmetry.

BRAND CLAIM
“The Grip is the ultimate all-rounder. Designed to adapt rather than to compromise. This exact shape propelled Victor Fernandez to a PWA world title. With five fin boxes and a shape designed to excel without bias in both tri-fin and quad configurations, the Grip is a champion in all conditions!”

PERFORMANCE
Set up with the supplied fins, the Grip 89 releases smoothly once power is delivered and you make a positive push off the wind. The straps are easy to locate and the contoured deckpads provide ample traction underfoot. It has a very planted and comfortable stance, retaining plenty of waterline and connection to the water without feeling sticky or slow. In powered cross to cross-offshore conditions the quad configuration really came into its own, doing the ‘Grip’ name justice as the board just feels so smooth and confident on its rail, inspiring the rider to push harder through their back foot. In less than ideal conditions, we were real fans of replacing the two back fins with a larger single fin (we tried everything from 20cm to 17cm).
In marginal winds, the extra drive seemed to improve early planing and pointing potential, whilst in cross-onshore waves, the 89 seemed to glide through the last few degrees of the bottom turn more efficiently as a thruster, rather than needing to be forced. Setup is such a subjective matter, yet with its five long slot boxes the Grip can be fine-tuned until your heart (and style) is content. In challenging seas, the Grip really began to stand out, its bottom shape absorbing any hard chop impact as its shoulders stayed clear of trouble, allowing the rider to maintain their stance and keep the hammer down. Even in 4.2m weather, when most are changing down board size, the 89 remains composed and comfortable – retaining its manners and enabling the rider to extend their session.

THE VERDICT
With its massive wind range and tuning potential, the Grip 89 is one of the most versatile wave boards on the market, capable of flattering the nervous rider without holding back the advanced; a real gem to contend with variable UK conditions.