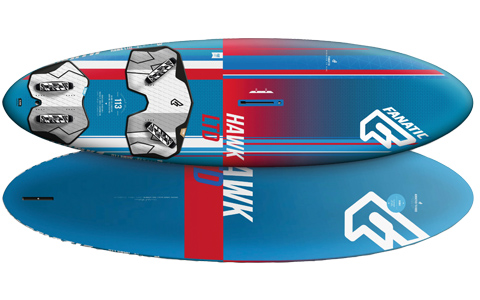 THE LOW-DOWN
Classed as their ‘freecarve’ board range, the Hawk’s three designs remain unchanged for 2016, each available in two construction options – Bamboo, or their more performance-oriented Limited technology as tested here – using an Innegra carbon and cork sandwich layup. Designed for both speed and comfort, the Hawk is long and narrow with a very balanced outline and domed deck throughout. The deckpads extend right to the rails of the board, with what seem like an extra grip area on the edges of the pad to compliment the raised areas under the heels. With plenty of footstrap options (including inset), and a more forward fin position, the design of the Hawk suggests at a more universal performance with emphasis on control and cornering rather than out and out straight-line ability, so it would be a good comparison to the other freerace contenders on test here.

BRAND CLAIM
“The Hawk is the real, all-round talent of our range guaranteed to blow your mind! If your dream board is a combination of the acceleration and gybing characteristics of the Skate, the easy and stress-free feeling of the Gecko, and the competitive fast aspects of our Falcon range, then the Hawk’s got it covered. Not to mention this year’s new graphics, which represent a sleek blend of classic and modern trends.”

PERFORMANCE
The Hawk sits next to the Falcon in the Fanatic range (the latter available in two constructions – full carbon Team Edition (TE) technology and their more robust BGS layup, with extra strap inserts and a supplied fin). With the 112 Falcon due to be tested next month, it seemed fitting to explore the Hawk’s particular niche, which we soon realised was unique in this group. On flat water the 124 rises onto the plane in a smooth conventional manner, feeling easy and supremely controlled, more akin to a cruisy freeride board than anywhere near slalom-esque. Its performance in light to marginal winds is passive and accommodating if nothing standout in the group, the Hawk simply sitting down and parting the water rather than flying on its fin. But as the wind increases and the conditions turn on, the Hawk begins to step up and take the limelight. Load it with power and it responds with excellent top end speed, keeping up with most and becoming the board of choice when the sea state became severe. In short sharp chop the Hawk was both controlled and responsive, allowing you to pick the best course effortlessly through the maelstrom on the water’s surface. And in these conditions control directly results in speed, allowing you to lock in, plough more power into the board and keep charging. When properly loaded we also found that the Hawk was a master at pointing, being quick off the wind, yet thrived at veering back up to source and pinching high to the wind. The fin gives just the right amount of feedback to really sense its edge of release and yet give plenty of warning before it does go. And when it comes to the gybe, the Hawk’s manners and practicality remain the main feature, allowing for safe and easy passage whatever the terrain.

THE VERDICT
Smooth, dependable and supremely controlled, the Hawk really comes alive when the conditions do, steadfastly retaining these three qualities and making top end performance easy and accessible.