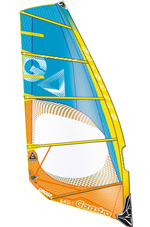 OVERVIEW
Said to be compatible with either RDM or SDM in this size, it was tested on a 100% RDM here and rigs with a relatively tight mid-leech on minimum setting, the fourth batten protruding well beyond the leading edge of the mast, requiring plenty of positive outhaul to ensure smooth rotation between tacks. GA Sails state that they’ve refined the Cross with a revised leech outline, which combined with the posi-leech system has improved the sail’s bottom end power. There is also new batten shaping incorporated to add depth to the front third of the sail, increasing stability and power through transitions. Visibly very bright and distinctive on the water, it would be interesting to see how these changes would translate to performance on the water.

BRAND CLAIM
“The Cross is magic; great fun for either blasting on flat water or taking to the waves. It’s so smooth and combines amazingly with our 3S boards.” Cedric Bordes

PERFORMANCE
Light and poised in the hands at rest, the Cross certainly generates a reasonable amount of bottom end power, yet it is more subtle, building gradually rather than pulling forcefully. It is an efficient sail and rewards good technique, gathering pace quickly as it accelerates to an impressive top speed. The centre of effort is placed forward yet quite high in the sail, making it versatile in the stance it can adopt. Happy cruising at half speed, it has superb handling, feeling balanced and more compact than its dimensions would suggest. Its power delivery is crisp and positive, with instant response and feel – it’s as if it feels alive in the hands, lending itself to manoeuvres from classic freestyle stunts to bump and jump aerials. It certainly wouldn’t feel out of place in a wave break, going wonderfully neutral and light during transition. As the wind increases however, the Cross really begins to turn on. It has a wide natural range on one setting, rarely losing its composure or asking questions of the pilot. Happily partnered with a fast freeride even freerace hull, as a gust hits the Cross it efficiently translates the extra energy into more performance, pushing the board further to greater speeds. It really does have impressive top end stability and turn of speed, combined with its handling credentials, it has the ability to mix it up in any coastal environment.

THE VERDICT
Light crisp handling and rock-steady stability, the Cross is at home in any role from flat water blasting to marginal wind wave riding, but really comes alight when the conditions become increasingly demanding. Well recommended for its precise handling and top end performance.