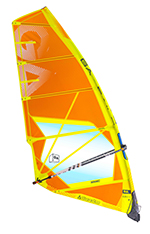 OVERVIEW
The Manic has had an overhaul for the new season and is available in three colourways, the red version being an HD option, with x-ply used in the window panel. Described as their ‘universal all-round wave’ sail, it has two distinct design pathways within its range – powerful 5-batten sails in sizes 5.0m and above, and more neutral 4-batten sails in 4.7m and below. Reconstructing the entire GA line-up around constant curve masts in 2017, the Manic was rigged for test on a 100 RDM and sets with plenty of shape evident in its draft, even at rest. There are a few new concepts incorporated for 2019, the first being a ‘parallel batten system’, where the ‘middle battens’ (numbers two, three and four) all lie exactly parallel, said to provide a smoother more balanced nature. The second is a reduced monofilm window, intended to increase overall strength by minimising the vulnerable area. It has got to be said that the overall effect works to the Manic’s advantage – with just two bold colours making up the sail’s panels, it certainly has a striking appearance this season. Look closer and the laminates used (both the 4mil x-ply in the foot and 1.75mil 2-ply in the upper panels) have metallic flakes sandwiched in their film – giving the material some drama, with the stated additional bonus of being UV resistant, prolonging the life of the material. Other features of its 2018 predecessor remain, including the integrated battens, radial tendons from the clew and the convertible batten system, enabling the batten above the boom to be reduced to ¾ length. There’s plenty of tuning range besides the batten change, with leech tension and draft depth changing significantly by varying loadings.

BRAND CLAIM
“The dual concept of our Manic range combines power and light feeling at its best, creating one of the most radical wave sails on the market with more power than ever before!”

PERFORMANCE
In light, marginal winds the Manic has an impressive lightness and response for a five-battened sail, swelling and generating useable feedback as the pressure builds. There’s shape and profile to the draft already, so the positive forward pull is already there, yet the Dacron luff panel helps the sail to breath further still, really giving the rider something to use and push into the board. This already purposeful nature can be extended further still by using the ¾ length main batten, allowing the lungs of the Manic to expand further, before shrinking back during transition to exhibit wonderfully neutral handling characteristics. It makes for an inspiring float and ride partner, with a soft on-off style that can be used to great effect. In powered to overpowered conditions (and with the full length batten back in place), the Manic can be re-tuned with more tension, opening up the leech down to batten four, whilst the shape to the draft remains present. It offers real control, the progressive delivery thanks to the movement in the luff panel helping to iron out the sharp feedback from lumpy seas or violent gusts. As such, it is a relaxing sail to use for long periods, even in the harshest seas. In big seas and clean open faces, the Manic provides the impetus to charge hard, although with its forced camber, it never goes completely neutral in the hands. The two clew eyelets do change the sail’s nature slightly as well, but they are situated very close together and the range of the sail is such that its nature can be altered more significantly by other means.

THE VERDICT
From light handling with useful on-off power (3/4 length batten mode), to supremely locked-in and dependable, the nature of the Manic can be transformed completely through tuning. Its smooth delivery and balance charmed us as much as its glittery close-up visuals.