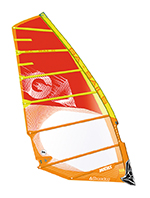 OVERVIEW
As with the rest of the GA Sails line up, the Matrix has had a complete overhaul for the 2017 season, now configured for use with constant curve masts. Yet unlike most of its stablemates, it has also had a job description update. With the disappearance of the Savage, and the Hybrid coming in to beef up the role once filled by the Pilot, the 2017 Matrix’s position has been skewed more towards a performance-oriented capacity, shifting from a 6-batten framework to 7-battens at this 7.2m mark. Described by the brand as the “ultimate all terrain freeride sail” its new mast requirements have led to a reported reduction in luff curve (in relation to the 2016 Savage we presume) to make the sail “more agile and dynamic”. Under closer inspection however, that is the least of the visual changes made. The outline of the Matrix is very eye-catching this year, with a more obvious ‘POSI-LEECH’ convex shaping to the trailing edge, before the significant step in the outline at the end of the batten directly above the boom (called a dynamic cut-out by GA-Sails). Combine that with a refined inset clew design, as well as a new, lowered foot geometry, and the Matrix looks every bit the new kid on the block.

BRAND CLAIM
“The changes for this year put the Matrix in a league of its own! When you want power it is there. When you want control, you have it. For learning to turn and all-round blasting past your buddies, you can’t go wrong here.” Ross Williams

PERFORMANCE
Rigged on a GA Sails C75 SDM, the Matrix still has one of the more pronounced luff curves in this group, with all three bottom battens retaining rotation round the mast. With shape locked low and forward in the draft at rest, the Matrix’s profile expands even more as pressure builds, thanks to the play in the Dacron luff panel and the luff tube. As such, it feels large and powerful in the hands, generating an impressive amount of bottom end grunt to punch the most defiant board out of the water and onto the plane. Once there, the Matrix soon settles into a comfortable locked-in stance, the large foot shape making it effortless to close the slot whilst the mast remains upright and driving forward. Super balanced and positive, the notion of extra power is always there through the backhand, ready to point higher and lose your peers or glide through a prolonged lull. As the wind increases, the Matrix can be re-tuned with more tension, opening the leech further right down to the ‘dynamic cutout’, thereby allowing the mid-leech to twist and spill the excess pressure to enhance the sail’s efficiency. Fast on all points of sail, the Matrix’s balance and breathable nature also make it forgiving to use for long periods, moving round the rider and absorbing impacts as it travels over harsh seas. It does feel its size in manoeuvres, due to the large foot area, but exiting transitions comes easily with the sail’s progressive power delivery.

THE VERDICT
The all-round performer in the group, the Matrix brings smooth useable power and masses of tuneable range to complement its super balanced handling. Partner it with any board, from intermediate progression to freerace blaster; hook in, hold on and let it do the hard work for you.