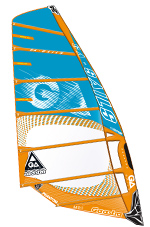 OVERVIEW
The Phantom was a stand out sail in the multi-cam test we conducted last year, combining the ease of a twin cam with near slalom-like performance. For the new season, the sail has been modified with a new 2-ply material in its upper luff to improve flexibility, and increased shaping in the front third of the sail to keep the draft locked forward and driving. Rigged on the recommended 75% SDM mast, the Phantom remains straightforward to rig for a sail with such a deep luff sleeve, the two large cams popping on the mast easily and staying in place as the sail is downhauled fully. It takes a great deal of tension, and possesses one of the most pronounced luff curves in the group, with significant looseness throughout the upper panels before running along much of the leech’s length to the clew. Nevertheless, there is plenty of depth placed low and forward in the draft despite the tension applied.

BRAND CLAIM
“The GA Phantom is a high performance freerace sail. Its simplified double cam is easy to rig and keeps the sail’s skeleton structure strong to give the rider the best performance and easy rotation, combined with top end speed and stability. For 2016 the Phantom has a new, improved panel layout with less seams, making the sail stronger and lighter. Refined shaping points for more stability and an adjusted luff curve for a smoother racing leech that has created a better top end speed.”

PERFORMANCE
Having played with the Phantom’s tuning extensively during the test, we came to the conclusion that it is best on one set, where it displays a wide natural wind range. Try to reduce the tension and the sail quickly loses its slippery feel in the hands, with little improvement in bottom end power as an upside. Instead, we found it best to crank on the downhaul fully and fine-tune the power delivery using neutral to small amounts of positive outhaul. On the water, the Phantom doesn’t possess masses of low end grunt yet generates crisp, precise power feeling firm and solid in the hands. It’s when the wind increases that the GA begins to show its true colours, settling into a locked in and compact stance. It remains to be a true blaster’s dream, accelerating in the hands with every gust, its low and forward centre of effort feeling rock steady and bestowing a defined balance to the sail in the hands. In severe winds, the power delivered can be tempered with a slight increase in outhaul, whilst the sail continues to pull and pin the board down, slipping through extreme gusts unaffected and gliding through lulls. With all this tension locked in, the Phantom does feel more physical to handle than we remember of its predecessor, perhaps due in part to a failure of memory or more likely a feature highlighted more accurately comparing sails in the current test group. But with solid rotation in transition and firm unwavering stability, the Phantom returns every effort the rider puts in with interest.

THE VERDICT
Crank on the tension and wait for the magic to happen as the wind increases. The Phantom is a fast, slippery contender that demands physical rider input and rewards with blistering performance.