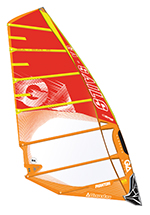 OVERVIEW
The Phantom has been popular amongst our test team for several seasons now, providing power and efficiency in a lightweight 2-cam package. 2017 sees a new chapter in the Phantom’s story unfold however, adopting a 2 + 1 cam configuration to compliment its new constant curve luff profile. Take the top cam out and the Phantom resorts to being a twin-cam for ease, simplicity and lightweight; keep it in and it’s claimed the sail’s performance is enhanced. It was tested here on a 75% SDM and proved straightforward to rig in a conventional manner, each cam possessing a pocket for easy access and allowing for material stretch. There are distinct similarities with the Vapor race program, with adopted features such as its large luff sleeve, new integrated batten technology in the top panels and the inset clew eyelet, which in effect increases the sail area below the boom. All the features are designed to increase performance and efficiency, bringing the Phantom more in-line with a full race sail.

BRAND CLAIM
“The 2017 Phantom has a new high aspect outline and smaller sail head. We have increased the amount of shape in the head of the sail and this in combination with the new outline and constant curve mast result in a sail that has better power down low with superior speed at the top end.”

PERFORMANCE
Set with the prescribed amount of downhaul tension, the Phantom has real depth to its profile and generates a good deal of bottom end power. There is plenty of sail area low and focused around the rider, providing solid, positive feedback in both hands to punch the board clear of the water. Easy to lock down and settle into an assertive stance, the top clew eyelet can be used effectively in marginal conditions to really help accentuate the power that is available. And this is the real difference between the new Phantom and its predecessors – for 2017, it really pays to tune and experiment with the sail’s settings. As the wind increased, the Phantom began to feel quite large and bulky in the hands, despite its average dimensions for the group. With more shape higher in the luff, it provides real drive in marginal winds, but needs to be re-tuned as the power comes on to stop the mid-leech billowing and loading the backhand. Pull the tension on beyond the increments given and the leech opens much more, promoting twist through the head and mid-leech. The luff curve is significant, whilst the shape in the head flattens off. It all adds up to the type of performance we have come to expect from the Phantom dynasty – blisteringly fast off the wind and accelerating through every gust. Meanwhile the profile remains significant low down, providing the drive through the lulls and the rider-centred feedback to make it accelerate out of turns. More performance machine than easy cruiser, we didn’t get a chance to try this 2017 version as a twin cam, but such is its bottom end performance in marginal winds that we didn’t really feel we were left wanting enough to really explore this option. Instead, be prepared to experiment with the Phantom’s set as a three-cam and it will open a world of serious blasting for use with freerace and slalom boards.

THE VERDICT
Stepping ever closer to its purebred racing stable-mate, the Phantom demands some tuning and tinkering to really understand its potential, yet offers everything from solid bottom end grunt to high-tensioned seemingly limitless top end stability, which all comes at a healthy price tag.