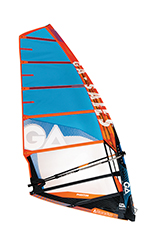 OVERVIEW
The Phantom once again takes its place in the GA Sails lineup, next to the Vapor in their slalom/race series, providing “racing performance with ease”. Taller and broader than last year’s version, the 2018 Phantom boasts many of its PWA racing sibling’s developments, such as the use of C-Film in the upper panels (for minimal UV fade), integrated battens and tensioners, and fixed outhaul pulleys in the clew for use with adjustable systems. There is no crossing batten with the boom, the second lowest batten extending out beyond the eyelets instead, increasing the sail area below the boom. Rigged on a 75% SDM mast, it is certainly one of the more demanding sails in the group to downhaul, the resistive Kevlar material in the sail’s chord complimenting the mast and generating masses of skin tension throughout. At rest the Phantom has plenty of forwards depth to its draft, which extends quite high up the leading edge. Meanwhile, the leech displays plenty of looseness in the upper panels, yet remains relatively tight in the sail’s mid-section. With its wide luff sleeve and identical colourway to the Vapor, the Phantom looks the part and has a hefty price tag to boot, so is it worth it?

BRAND CLAIM
“Perfect for freeracers that want the speed and power of a racing sail but don’t want to commit to the full-on racing engine we call the Vapor. Some of the international team believe if conditions are right the Phantom is as quick as the Vapor. Some even choose the Phantom for racing and training for the tour. It´s been carefully designed to offer you that perfect balance of early planing and top end speed.”

PERFORMANCE
With a more pronounced, forward-focussed draft than we recall of its predecessor, the new Phantom also has a longer boom and generates plenty of bottom end drive, coupled with response through the back hand once pressure builds. The pull comes from a forward position, but most interestingly from high up the sail, meaning the rider is free to feather the sail effortlessly through the back hand and channel the power into the board. Once locked, the sail accelerates actively in the hands, becoming lighter and lighter the faster it goes. It’s a sensation that really grabs you and has you hunting for gusts … plus anyone else in front of you that you might fancy racing! It is fast on all points of sail, its slippery efficient nature masking its size as it cuts through the air. We had a chance to compare the Phantom to some top end race sails and have to say, in marginal to comfortably powered conditions, it was a match for all, only really conceding when the conditions truly lit up. Around the gybe the three cams rotated smoothly, the power returning quickly to help charge and accelerate out of the corner. It looks and feels quite special when on the water, as if it always has more to give … making you question whether you have the minerals to keep up with it? Easier to rig, lighter and more relaxing to sail than its Vapor stablemate, the Phantom is a gnat’s whisker away from being a race thoroughbred in its own right, and as such demands attention to tuning and precision … but get it right and you’ll be left smiling that every penny was worth it.

THE VERDICT
No dumbed-down poor relation race sail, the Phantom is a marvel in its own right and whilst possessing a price tag that can’t help but grab your attention, it provides the performance to justify it.