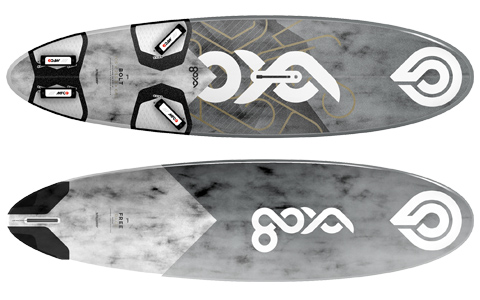 THE LOW-DOWN
The Bolt is an all-new series of freerace board for the Goya line-up this year, available in three sizes, this 115 being the largest but with plans to introduce a 125 and 135 by late spring. Produced solely in the brand’s C6 full carbon monocoque construction, they are leaving nothing to chance, with a sanded finish, economic graphic coverage and minimalist deckpads to reduce weight and enhance performance. Goya are also quick to point out the Bolt’s extended rocker flat, from its track to tail, which then houses some cutouts that stretch along the rail in line with the back straps. Interestingly, the fin is also placed further forward in the board than others in the group, the cutouts narrowing along most of the finbox’s length. With its low nose rocker, scooped deck around the mast track and parallel rails in the mid-section, the Bolt looks every bit the part.

BRAND CLAIM
“The Bolt gets up and planing on the lightest breeze, and paces through gusts, allowing you to forcefully ride on the fin with direct control. The outline curves and rail shapes project you out of gybes like no other board in the Goya line. Full Carbon layup. Extremely sanded weight saver finish. A bare minimum of graphics. Small pads. In one word the Bolt is the essence of fast windsurfing with barely enough comfort to gybe and go through real life chop. Welcome to a new dimension of the Goya universe. We’ve mastered curves. Here’s to straight lines.”

PERFORMANCE
With the Bolt signalling the first foray into freerace or slalom for the manoeuvre-specialist Goya board magnate, would this be a step too far? Well, we needn’t worry if the Bolt is anything to go by! Physically light, it is also incredibly responsive and alert underfoot, releasing early and accelerating quickly. It sits high on top of the water, the back of the board skipping over the water whilst the fin provides fantastic traction with which to push against and feather the board’s flighty nature. And this is the beauty of the Bolt’s character – its low gunny nose shape and lively nature give the Bolt a distinctly freeracy feel and yet at no time do you ever feel the board is getting away from you, even in treacherous conditions. If the nose begins to rise too much, any control decay can be halted by standing upright over the board, making it return in an instant. Could it be down to the Bolt’s narrow tail compared to the others in the group? Or the forward fin box position mentioned earlier? What we can say is that the forward box means the rider’s back foot is more over the fin, making them feel really connected and capable of gauging the lift and purchase generated. We can also really sense the narrower rounded tail come into play in the gybe, biting beautifully and helping to redirect the board’s speed round the arc of the turn, thriving on a more committed style and providing the confidence to push harder on the next.

THE VERDICT
With a light, exciting and fantastically engaging ride, the Bolt is a triumph for Goya as their first freerace contender, offering race-winning efficiency matched with quality-freeride user-friendliness.