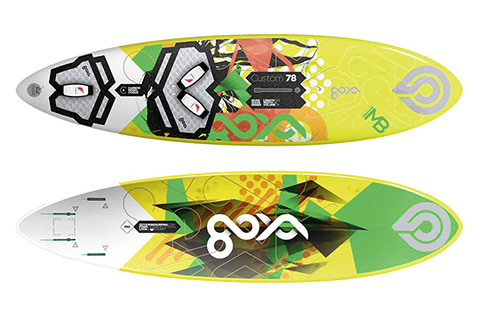 THE LOW-DOWN
The Custom 84 comes with a MFC 4 fin set up that will suit almost all conditions perfectly. The thrusters are mounted in mini tuttle boxes and centre fins in short US boxes.

BRAND CLAIM
THE DEFINITION OF A MODERN WAVE BOARD
Everything starts in the beginning. The front. The nose. On the Custom it’s narrow, just as on surfboards, allowing you to get closer into the wave and its curves. It’s a very compact board with a fast progressive rocker that keeps you driving forward at all times. Since it’s so compact we suggest you pick one size bigger than your normal choice as the new Custom feels very small, and a higher volume will allow you to go with a smaller sail, making it that much more enjoyable.

PERFORMANCE
The all-conquering Goya Custom was a worthy test winner in this category last year and its crown hasn’t slipped yet. It is quite remarkable how similar the 84 and 94L models feel and we reckon that if it were possible to conduct a completely blind test in 25knts we would struggle to tell the difference bar the float. As an all-round package the Custom was the first board we had ridden to give such an invisible feel, and it does still top the group in that respect. We also still like the minimal adjustment options for the fins and straps. If you don’t want the hassle of experimentation and tuning this is definitely one for you. Goya have done the work already and nailed their colours to the mast so you don’t have to. It also doesn’t require a specific body shape and size, diminutive or the size of Lampie (rather tall Dutch gent) the Custom won’t cramp your style.

The Custom’s turn of speed and variable carving ability continue to bring a smile, along with jumping prowess that is confidence inspiring  and definitely aided by the compact dimensions. The Custom was one of the shortest and smallest overall size boards on test.

The competition would appear to have learned a few lessons from the Custom, and thus it has some close performing rivals here, but for straight-forward simplicity of use, the Goya Custom is hard to beat. Get on it go out and make a splash, you deserve it!

THE VERDICT
The Goya Custom took top honors in both tests last year and it’s still the complete package now. Some boards may do some things a little differently but the Custom is the sum of all its performance characteristics and as such, still at the top of its game.