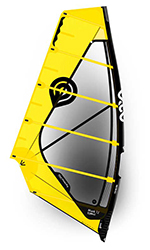 OVERVIEW
The Mark is now in its third season in the Goya lineup, classed as their six-battened freerace option. It retains the same increments as last year’s sail, but designer Jason Diffin has been working on the sail’s profile, twist and release, bringing more shape forward in the draft, before transitioning smoothly to a cleaner release along the trailing edge. With fairly average length increments in this group, the Mark possesses a lot of area higher up in the sail, giving it a distinctly boxy appearance. Tested here on one of the brand’s premium 99% masts, it sets beautifully, with one of the more extreme luff curves providing a high degree of skin tension in its panels. The location of the downhaul-tuning dot (and the increased number of mini battens) gives you a good idea of the amount of looseness desired in the leech, allowing it to fall away right down to the batten above the clew. Despite this, the three lowest battens all retain rotation around the mast, with plenty of shape locked forward in the Mark’s profile. With its coloured x-ply frame and faultless monofilm window, it certainly looks the part, the brand’s reputed carbon stretch control (CSC) tendons radiating from the clew to lock stability in place.

BRAND CLAIM
“Big results from small refinements on the Mark for 2018. … [It] has a more neutral feel when powered up. When that big gust hits, the sail stays settled. A big plus in control. We have updated the material in the tack and foot of the sail with a stronger yarn configuration in the laminate, and also we’ve made this material in the body colour of the sail for more visual impact.”

PERFORMANCE
Light and balanced at rest, the Mark feels relatively small in the hands initially, yet generates a good deal of bottom end grunt as a gust hits. The centre of effort is located forward yet relatively high in the draft, which, combined with the high skin tension and solid profile, generates plenty of instant drive. It has a precise, direct character, yet the movement in the luff sleeve and thin Dacron luff panel provides just enough stretch to temper the delivery and ensure it is manageable. In marginal winds, this makes the Mark particularly potent, capable of covering distance comfortably on all points of sail, the rider made constantly aware of the power available. In transition, the Mark is also very capable, the high pull position encouraging the rider in and over the board, before rotating cleanly and providing the punch to drive hard out of the turn. As the wind increases, the Mark can be re-tuned with more outhaul to flatten the profile and reduce the assertiveness of the power. Stable and locked in, the crisp delivery still comes from a high position, so requires input and concentration from the rider to ensure they don’t get pulled to their toes. Off the wind, the acceleration through the hands comes with every gust, the twist in the trailing edge helping to keep the power focussed forward. It’s certainly an engaging sail to use in challenging seas, but the more energy and input you invest, the more will be returned in performance by the Mark.

THE VERDICT
Crisp and direct in nature, the Mark is a potent performer, providing the power and response to endear it to those that like to be the pilot rather than just a passenger on the water.