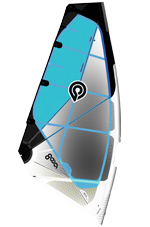 OVERVIEW
The Nexus has been completely overhauled for 2016 to provide a clear distinction between it and the Mark – Goya’s new no-cam freerace contender (due to be tested next month). With one less batten than its predecessor and now setting on a 430cm mast instead of a 460cm (recommended for use with a 70% carbon mast), the Nexus has been re-classed as their freeride / manoeuvre sail for use in a wide range of disciplines, from flat water blasting to bump and jump conditions. Rigging has been simplified with only one clew eyelet now incorporated, downhauling the sail to the recommended dot next to the Carbon Stretch Control seam in the leech, whatever the wind strength. From there, the sail’s profile and power delivery can be refined through the outhaul applied. It’s as straightforward as rigging gets and means minimal fuss for more time on the water.

BRAND CLAIM
“The heart and soul of freeride windsurfing is realized in the Nexus. Outstanding low-end power, stability and easy control, blazing speed, big jumps and hard carving manoeuvres, the Nexus will deliver beautifully on all of the above. Easy handling of the Nexus makes light wind sailing a lot of fun, and turns powered up sailing into a comfortable ride.”

PERFORMANCE
Significantly softer in nature than last year’s Nexus, the 6.4m nevertheless has a crisp useable feel in the hands, the give in the luff tube helping to temper the feedback from the x-ply luff panel and high skin tension as it is sheeted in. As with last year’s version, the centre of effort is quite high in the foil, pulling the rider into a more upright and relaxed stance over the board, rather than locked in and committed. As such, you would expect the 2016 Nexus to be more-manoeuvre bias, especially given its revised 5-batten layout. And yet this 6.4m was also surprisingly quick in a straight-line, albeit you need to relax and let the sail do the work – if you try to force the issue you actually end up going slower. Keep the sail upright to present it to the wind and it keeps accelerating, the notable luff curve and tension in the sail providing dependable balance and stability. In transition the Nexus is balanced and responsive, its high geometry and taut nature making the power delivery more direct than others when powering back up. It does feel its size, having marginally larger than average dimensions, and the sharp response meaning you need to counteract the power correctly rather than leave it to chance. That said, the power delivery can be refined beautifully using the outhaul tension and the unwavering structure in the sail means it rarely becomes overbearing in severe conditions or cumbersome in the hands.

THE VERDICT
Completely redefined for 2016, the new Nexus stands for crisp, direct handling and rock-steady stability in a sail that can be used in any environment. Effortless to rig and tune for maximum water-time.